Ahead of Saturday’s election contest, both leaders spoke with SBS News about whether their records have matched their rhetoric on supporting multicultural communities. 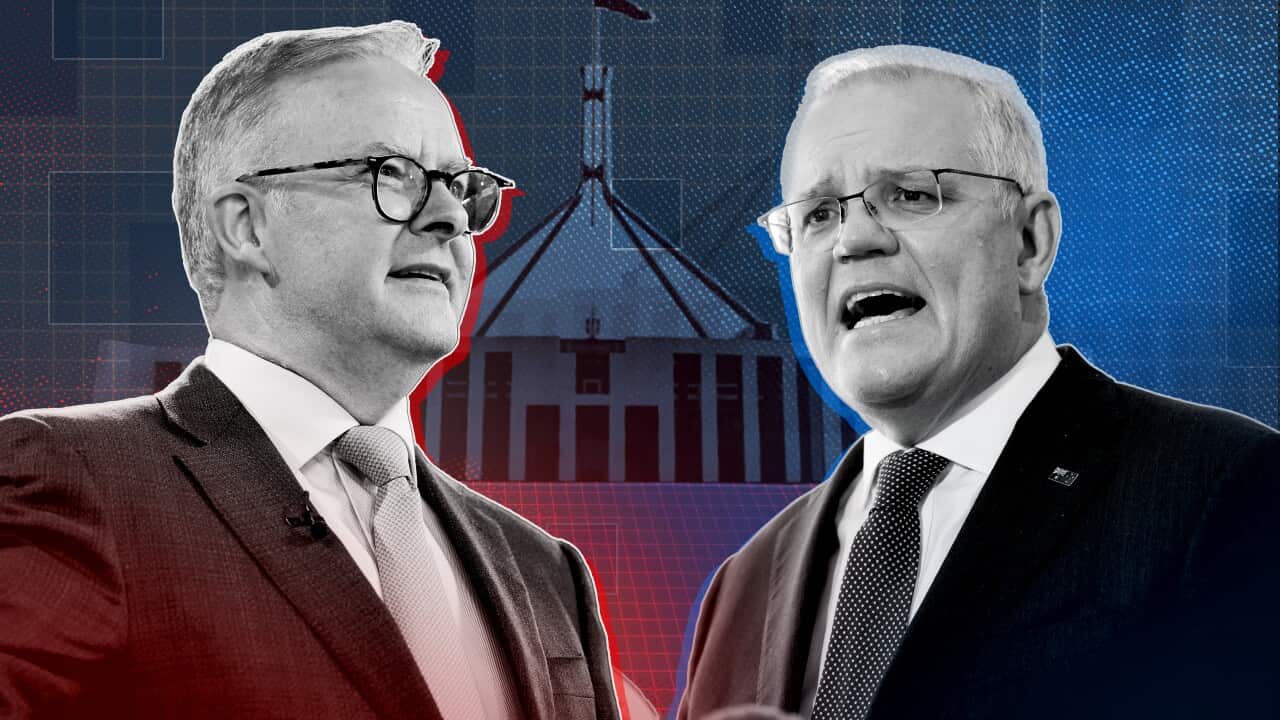 After a federal election campaign littered with choreographed meetings with multicultural community groups, Prime Minister Scott Morrison has backed his record of delivering for Australians of all backgrounds as Opposition leader Anthony Albanese declares his diverse team is prepared to do the same if elected.

Ahead of Saturday’s election contest, both leaders spoke with SBS News as they make their final pitch to win over voter support in the crucial poll to decide Australia’s future.
Advertisement
Six weeks of crisscrossing the country have seen Mr Morrison make appearances at events such as
Eid prayers with members of the Muslim community in Sydney
and Passover with Jewish community members in Melbourne as well as spending time at a Greek Orthodox church and with communities of Indian heritage.

Mr Albanese has drawn on his Italian roots
to front the Marconi Club in Sydney
, while also visiting the Hindu Council in Sydney’s Parramatta and the Lebanese Maronite community. He also praised Afghan volunteers during a visit to a local charity in his home electorate of Grayndler in Sydney's inner west.

During his interview with SBS News, Mr Morrison was questioned by Chief Political Correspondent Anna Henderson about whether his record has matched the commitment to multiculturalism he has shared during his campaign appearances.

“You locked some Indian Australians out of the country during the pandemic, you’ve been going hard on the anti-Beijing rhetoric, which some Australians have told SBS has made them feel alienated. You have a
former political opponent Michael Towke
who says you’ve used race in the past - should multicultural communities back your government given the way they’ve been treated?” she asked.
Prime Minister Scott Morrison hands out lolly bags after Eid prayers on Day 22 of the 2022 federal election campaign, at Parramatta Park in Sydney Source: AAP / Mick Tsikas
Mr Morrison told SBS News: “Our record has been about supporting all communities and particularly Chinese Australians.

“The issues we have are with the Chinese government not the Chinese people - Chinese Australians.

“We’re all Australians regardless of what our heritage is.”

Asked about his frequent campaign stops with multicultural and faith groups, Mr Morrison said his government’s plan would back in communities from all backgrounds in Australia.

“I’m so grateful to the many different cultural communities and language groups and faith groups around the country,” he said.

“The one thing I know about people who come to this country is they come with great ambition - greater aspiration. Our plan backs them in.”
Mr Albanese was also questioned about his commitment to migrant communities, following Labor’s decision to parachute Andrew Charlton into the Western Sydney seat of Parramatta over potential candidates from non-English speaking backgrounds.

Labor also endorsed frontbencher Kristina Keneally as candidate for the neighbouring seat of Fowler over Tu Le, who is of Vietnamese Australian heritage.

The Opposition leader said the diversity of his political lineup was evidence of their capacity to address the concerns of communities from different backgrounds.

“Have a look at what we have with candidates from diverse backgrounds right around the country,” he told SBS News.

“I’ve been campaigning in with people like Sally Sitou in Reid, with Michelle Ananda-Rajah there in Higgins.

“We have a very diverse range of candidates and I’m proud of all of them,” he said.