A number of European countries have paused the rollout of the AstraZeneca vaccine or limited its use to older people, with the European Medicines Agency (EMA) expected to announce updated advice on 7 April. 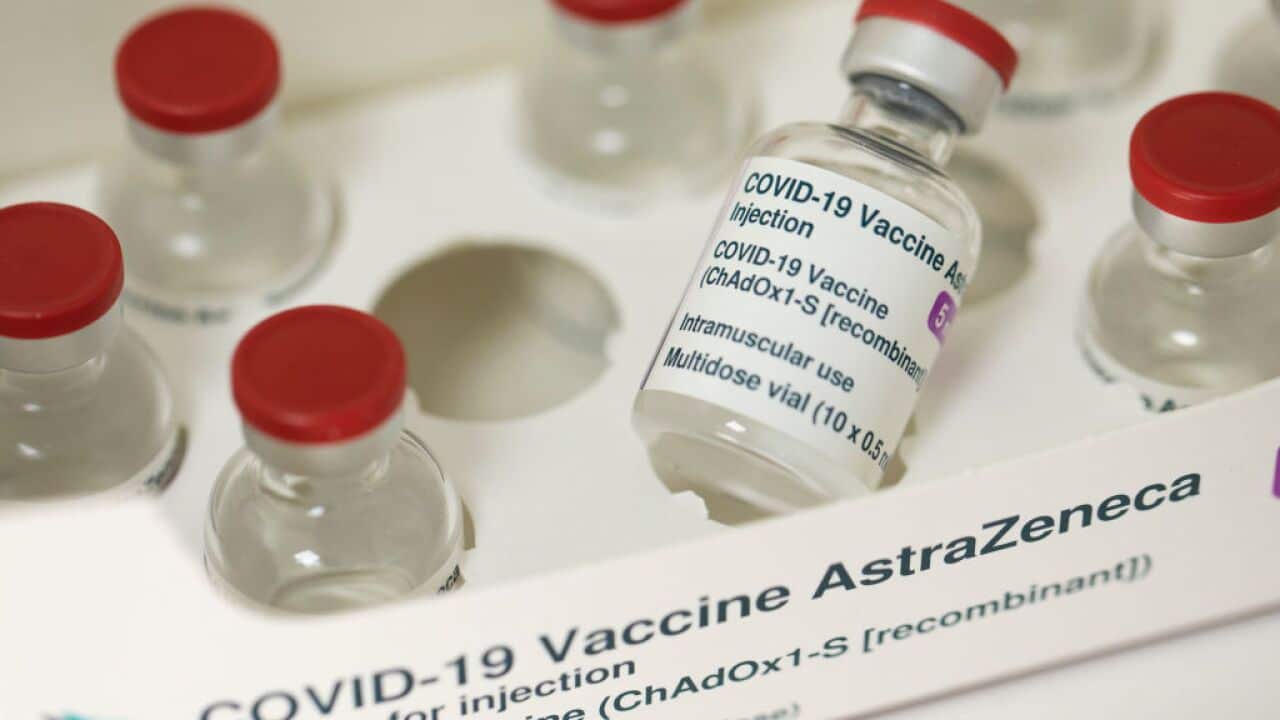 Both the MHRA and European Medicines Agency (EMA) say no causal link has yet been established between the blood clotting case and the AstraZeneca vaccine. Source: Getty Images Europe

The UK medical regulator says that out of 30 people who suffered rare blood clots after receiving the Oxford-AstraZeneca vaccine, seven have died.

The British acknowledgement of deaths comes as several European countries have paused the use of the AstraZeneca jab over a potential link to blood clots.

The UK's Medicines and Healthcare products Regulatory Agency (MHRA) said in a statement that "Out of the 30 reports up to and including 24 March, sadly seven have died."

Advertisement
The reports of thrombosis, submitted by medics or members of the public via a government website, came after 18.1 million doses of the vaccine had been administered in the country.

There were no reports of blood clots from the Pfizer-BioNTech vaccine, the UK regulator said, adding that "our thorough review into these reports is ongoing".

"The public should continue to get their vaccine when invited to do so," she said.

Both the MHRA and European Medicines Agency (EMA) say no causal link has yet been established between the blood clotting case and the AstraZeneca vaccine.

But growing concerns have prompted a number of countries to pause rollout of the vaccine or limit it to older people due to the relatively young age of those who suffered blood clots.

Netherlands on Friday halted vaccinations with the AstraZeneca jab for people under the age of 60 after five new cases among younger women, one of whom died.

Germany has suspended the use of the vaccine for those under 60 after 31 cases of blood clots, most of them among younger and middle-aged women.

A number of other countries including France have imposed a similar age restrictions, while Denmark and Norway have suspended all use of the vaccine.

READ MORE
After a slow start to the COVID-19 vaccine rollout, can Australia still meet its October target?

The European Medicines Agency (EMA), which like the World Health Organization previously declared the AstraZeneca vaccine safe, is expected to announce updated advice on the issue on 7 April.

It said Wednesday that there had been 62 cases worldwide of cerebral venous sinus thrombosis, 44 of them in the European Economic Area, which includes the European Union, Iceland, Liechtenstein and Norway.

This figure did not include all Germany's cases, however.

More than 9.2 million AstraZeneca jabs have been administered in the region.

The EMA said it believes the vaccine is safe and that experts have found no specific risk factors such as age, gender or medical history.

Paul Hunter, a medical microbiologist at Britain's University of East Anglia, told AFP that he had initially thought the link between vaccination and blood clots was likely to be a "random association".

As evidence mounts of clusters in separate countries, "the weight of evidence is now looking towards Oxford-AstraZeneca actually being the cause of these adverse events", he said.

Nevertheless, the risk for the unvaccinated of dying from Covid is "substantially greater," he said.

A spokeswoman for AstraZeneca told AFP that patient safety is its "highest priority".

UK, EU and World Health Organization regulatory bodies have concluded that the benefits "significantly outweigh the risks across all adult age groups", she said.

AstraZeneca said last month following US efficiency trials that its vaccine is 76 per cent effective at preventing the disease. It also said data for the EU and the UK showed no increased risk of blood clots.

The UK has administered more than 31 million first vaccine doses, using both the Oxford-AstraZeneca and the Pfizer-BioNTech jabs. People cannot choose which one they get.