Jewish community leaders have called on other sellers to follow suit. 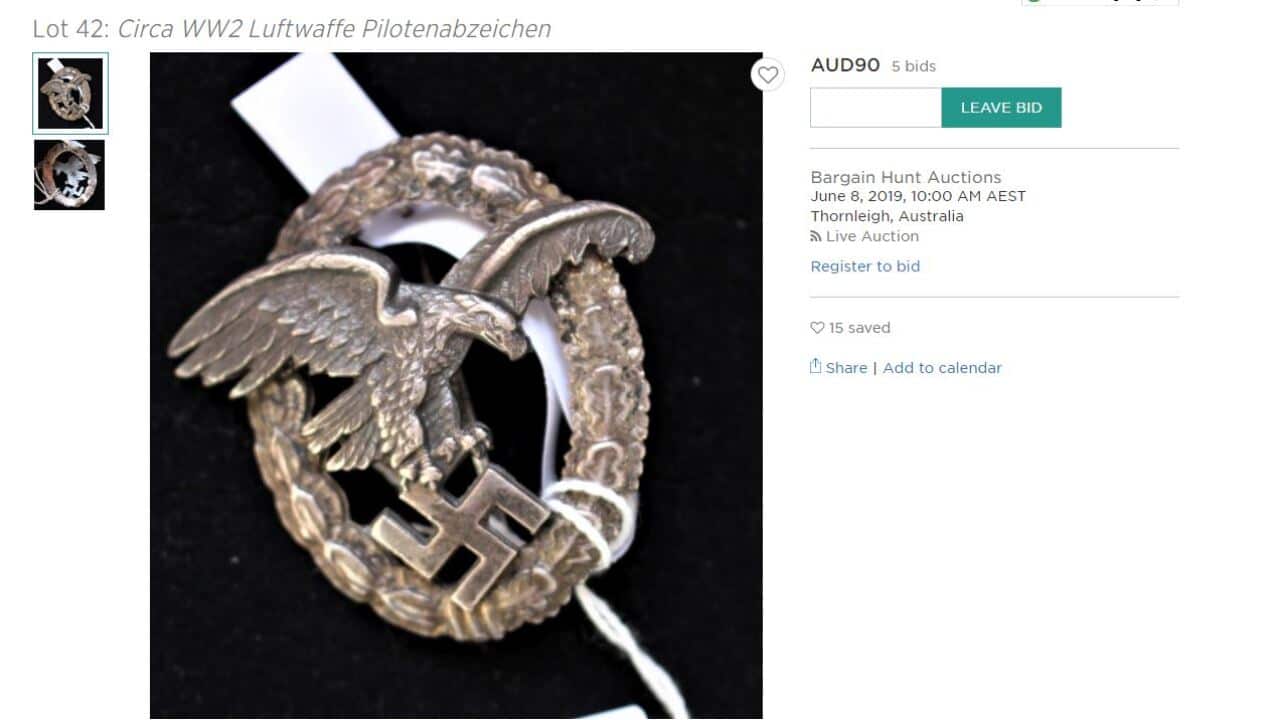 One of the items originally listed for auction. Source: Bargain Hunt Auctions

A Sydney auction house has said they will stop offering Nazi memorabilia for sale after a Jewish advocacy group called the practice an "outrageously obscene phenomenon".

Bargain Hunt Auctions, located in Sydney's northern suburbs, had originally listed at least eight pieces of Nazi memorabilia for sale as part of a "Militaria" auction planned for Saturday morning.

But when contacted by SBS News, following a complaint by Jewish community leader and Anti-Defamation Commission chairman Dvir Abramovich, the auction house said they would remove the items from the catalogue and would "decline anything Nazi orientated" in the future.

Advertisement
A Nazi matchbook holder that was originally up for auction. Source: Bargain Hunt Auctions

"We sell collections of anything, that's all we do, we are not here to offend anyone."

Dr Abramovich commended Bargain Hunt Auctions and called on "all sellers to follow suit and ensure that these vile objects and symbols of hate are not made available under their watch".

"We applaud Bargain House for choosing morality over profit and for showing sensitivity to the feelings of the survivors and victims," he said.

"No matter how far removed historically we are from the Holocaust, everything about this repulsive trade is wrong."

He also urged state and federal governments to assist in stamping out the sale of Nazi paraphernalia.

Bargain Hunt Auctions lists items for sale on behalf of private sellers - they do not own the items themselves.

Prior to the removal of the items, Dr Abramovich said selling Nazi memorabilia was "playing right into the hands of neo-Nazis".

The items have since been removed from the online catalogue. Source: Bargain Hunt Auctions

"Offering these symbols of genocide to the highest bidder is demeaning to the victims, to the survivors and their families and to the diggers who fought to defeat Hitler’s machinery of death," he said.

"Most Australians expect better than to see this flat out disgraceful event take place."

The Nazi Party was responsible for the murder of approximately six million Jewish people during the Holocaust - estimated to be two-thirds of Europe's Jewish population.

Anti-Semitic incidents have reportedly
been on the rise globally in recent years
.

In January, a shocking video surfaced of
a Rabbi being told he
"should've died in Auschwitz"
in a road rage incident at a red light in Melbourne.

The Rabbi, who wished to remain anonymous, said he was traveling to a synagogue in Caulfield, a heavily Jewish suburb southeast of Melbourne when he was attacked.

Earlier that month, a Jewish aged-care home in the same suburb was targeted with anti-Semitic stickers bearing a swastika. The facility is home to a number of Holocaust survivors.