From farm work to disability support, asylum seekers who’ve been released from immigration detention have stepped up to fill critical staffing shortages due to the COVID-19 pandemic. 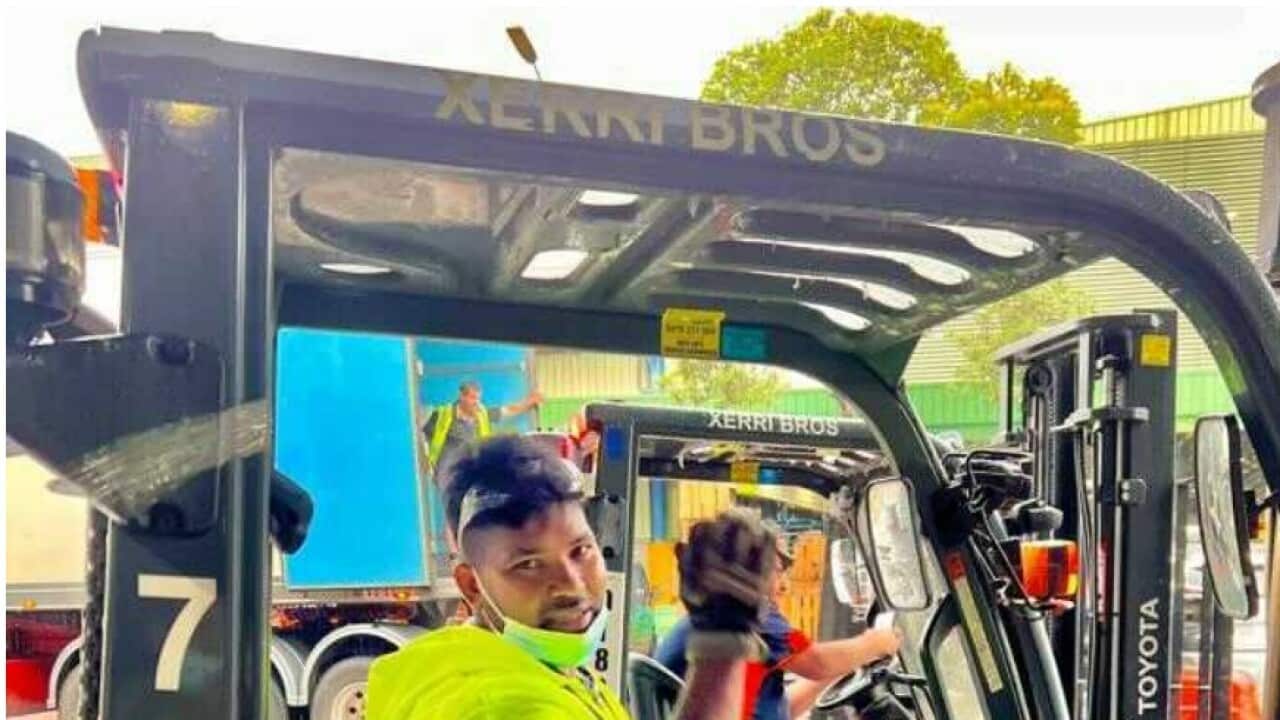 Donned in a hi-vis jumper and safety goggles, Thanush Selvarasa scoots around a Sydney supermarket on a forklift, moving boxes on repeat.

It’s been a year since the Tamil asylum seeker was released from Melbourne’s Park Hotel and granted a bridging visa.

And he’s been busy, working in several jobs in key industries affected by the COVID-19 pandemic.

Advertisement
Forklifts have become a topic of conversation this week, with Prime Minister Scott Morrison taking an industry proposal to National Cabinet on Thursday to allow those under 18 to drive the heavy machinery in a bid to address a critical staff shortage.

The idea has been largely rejected by state premiers and union officials who have raised concerns about workplace safety.

Mr Morrison confirmed on Thursday that National Cabinet "agreed to proceed no further with the issue of 16-year-old forklift drivers".

Apart from his job operating a fork lift, Thanush has also worked as a cleaner and in a pizza job. Source: Supplied

He thinks refugees and asylum seekers should be freed for detention and allowed to chip in to ease pressure on supply chains brought on by the Omicron wave.

“We would like to contribute to this country and pay taxes,” he told SBS News.

“Those of us who’ve been freed on bridging visas only have six-month visas. We need a permanent solution."

Thanush was detained on Manus Island for six years after fleeing Sri Lanka in 2013.

He was transferred to Melbourne’s Mantra Hotel in 2019 under the Medevac legislation before he was moved to Park Hotel in 2020 where he was later freed and granted a bridging visa.

Aside from operating a forklift, Thanush has also worked in a pizza shop, as a cleaner and currently interns at the Asylum Seeker Resource Centre.

“It is very difficult to rebuild our lives with a temporary visa,” he said.

“I have faced lots of problems in the community because we have been in detention for the last eight years.

“We can't get any loan or credit from the bank and it’s difficult to find somewhere to rent as we have no financial history.”

Like Thanush, each time Ramsi’s visa expires his work rights are put on pause until his bridging visa is renewed.

Due to the lingering uncertainty of his visa conditions, Ramsi has had six jobs since he was released from Park Hotel a year ago.

He currently works preparing fruit and vegetables for export at a market in Sydney.

“Every time our visa expires, we have to find another job,” he said.

“We can’t get annual leave or medical leave because we can’t find full-time employment with our temporary visas.”

Kurdish asylum seeker Kazem Kazemi was a musician back in Iran. Source: SBS

Kurdish-Iranian Kazem Kazemi is another asylum seeker who is filling a critical COVID-related staff shortage, working as a disability support worker in Brisbane.

After his release from a Brisbane detention centre last year, Kazem had been hoping to study nursing as he likes "to help people”, but found he was unable to do so due to the conditions of his bridging visa.

Kazem has also worked as a painter, where he claims he faced discrimination and was not paid fairly.

“I have even worked with someone who hasn’t paid me after three months. They owe me like $1,000,” he said.

“These problems are happening to many refugees because of the visa conditions here.”

In 2013, Kazem fled persecution directed at him by the Iranian regime and was later transferred to Australia for medical treatment in 2019.

As a heavy metal guitarist, Kazem could not perform publicly in Iran without fear of reprisal.

“[The Australian government] kept me in detention for eight years. Now I’m outside and it's like someone tied my hands. I can move,” he said.

“The real freedom is when you have your full rights, we have no full right here.”

As closed borders and a lull in migration cripples Australia’s agricultural industry, asylum seekers have stepped up.

Mardin Arvin is working at a farm in Gippsland, Victoria. Source: Supplied

Morning starts at 5am have become a ritual for Kurdish asylum seeker and writer Mardin Arvin, who works at a broccoli farm in regional Victoria.

The work is tough, with Mardin moving hundreds of crates every day, weighing around 10 kilograms each.

“They love me on the farm. I’m working with some people from PNG and I can speak Pidgin which I learned when I was detained on Manus Island,” he told SBS News.

Along with Tok Pisin or “Pidgin”, Mardin speaks three other languages. “I’m now trying to learn Spanish,” he adds.

Mardin feels right at Gippsland in Victoria, with the area reminding him of his birthplace in Iran's Ilam province.

But when he was freed from Park Hotel a year ago, he didn’t know how to use a self-serve checkout at a supermarket or how to purchase a bus ticket.

“When the Serco officers called my name, I couldn’t stop shaking my leg,” he said.

“I remember an ABF officer told us ‘I have good news for you guys. Tomorrow you will be free’."

Mardin said he laid in bed for hours afterwards, staring at the white wall in front of him, unable to believe he’d be freed from detention after more than eight years.

Back in Iran, Mardin was a welder and crane operator - a job he’d like to continue doing in Australia.

“It’s sad because I know that with this six-month visa, I cannot stay here,” he said.

SBS News has contacted the Australian Border Force and Department of Home Affairs for comment.