Christiana Figueres said she has long been frustrated by Australia's blindness to its potential as a world leader in renewable energies. 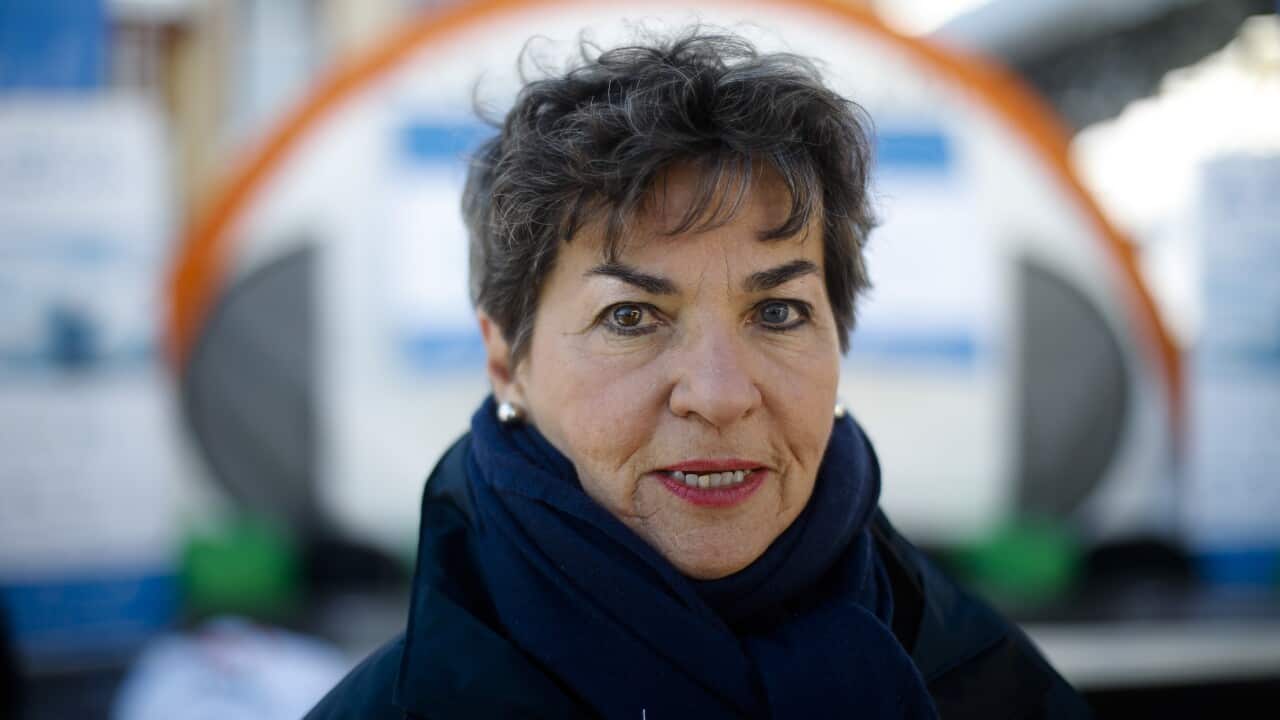 Christiana Figueres ahead of the World Economic Forum in Davos, Switzerland on 20 January, 2020. Source: AAP, AP

The world is impatiently waiting for Australia to end its "suicidal" climate wars and change its "unstable, volatile" stance on climate change, a former United Nations climate chief has warned.

Christiana Figueres has been involved in climate change negotiations since 1995, and was the executive secretary of the UN Framework Convention on Climate Change when the Paris Agreement was reached in 2015.

Speaking in a pre-recorded keynote to open the Australian Emissions Reductions Summit on Wednesday, Ms Figueres said she has long been frustrated by Australia's blindness to its potential as a world leader in renewable energies.

"I have been pretty vocal about my frustration for so many years of the completely unstable, volatile, unpredictable stand and position on climate change in Australia," she told John Connor, chief executive of the Carbon Market Institute.

"The climate wars that have been going on in Australia for over a decade now are just, honestly, they are such a suicidal situation, because Australia - of all countries in the world - holds such promise with renewable energies.

Ms Figueres said the nation's leaders are locked in a cycle of "seeing that promise" and then "tending to go blind".

"So, the world is impatiently waiting for Australia," she said.

Prime Minister Scott Morrison has come under increasing pressure to take stronger action on climate change, with a
recent poll
showing the majority of Australians want the government to adopt a target of net zero emissions by 2050.

Federal Labor argues that target is not ambitious enough - and are pushing for the government to adopt a net zero emissions target by 2050, similar to many other developed nations.

In a speech last month, Mr Morrison spruiked his government's commitment to meeting its goals under the Paris Climate Agreement, saying
he believed it may not need to use what it calls carryover credits from the Kyoto agreement to do so.

This would involve claiming credit for exceeding emissions targets under the previous climate agreement.

Ms Figueres, now the director of the global climate action campaign
Mission 2020
, likened this to carrying over points scored in one sporting match to another.

"We are in a completely different legal framework now," she said.

"It is just a total lack of integrity and not something that does Australia proud."

But she stressed she remains excited by the progress on climate action that she sees almost on a daily basis, in part due to the coronavirus pandemic and certain geopolitical shifts.

"Every day, there is one more corporation that has understood that in the interest of their bottom line, they will and must decarbonise," she said.

"The fact is, thank heavens, we have realised in great measure - thanks to COVID-19 - that not only is climate change not a constraint to economic growth, but rather addressing climate change is the only way to actually foster stable, safe and long-lasting growth."

Ms Figueres said she is seeing the beginnings of "pretty extraordinary alignment" in the post-COVID recovery period that started with the European Commission's trillion-dollar green and inclusive recovery plan earlier this year.

"It was then followed quite quickly by the Chinese president saying China would commit to peaking emissions before 2030 and to a net zero by 2060. Then we were followed by Korea, Japan and South Africa making similar announcements, and now the new targets set by the US administration.

"The magic here is to take advantage of as much alignment as possible at any particular moment in time."

Ms Figueres said she expects higher ambitions from all governments at the so-called COP26 climate summit to be held in Glasgow next  year.

The
Australian Emissions Reduction Summit
is being held virtually between 2 and 4 December.