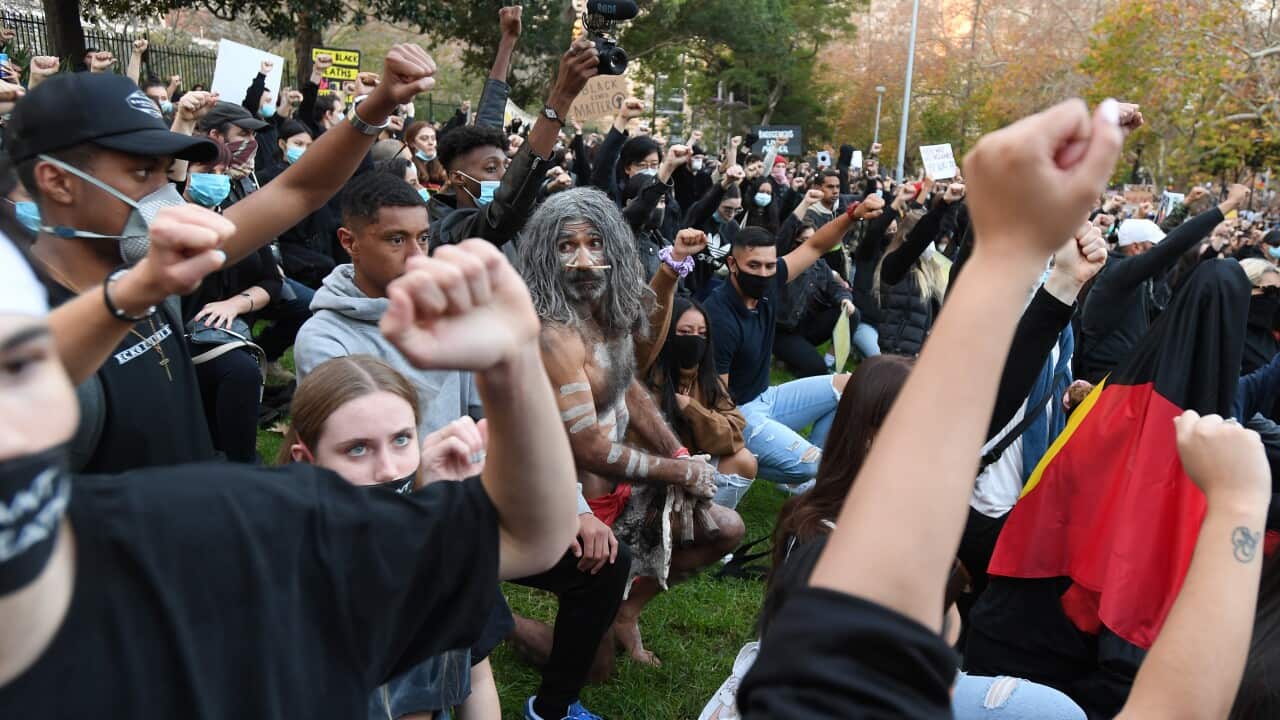 Thousands of people have marched in a Sydney Black Lives Matter protest after the NSW Court of Appeal authorised the rally just minutes before it was due to start.

On Friday, the NSW Supreme Court
refused to give permission for the rally to go ahead
on public health grounds, prompting organisers to file a last minute appeal on Saturday.

Twelve minutes before the scheduled 3pm start time, the NSW Court of Appeal declared the rally an authorised public assembly, meaning protesters could not be arrested for blocking roads along the planned route from Town Hall to Belmore Park.

Advertisement
Demonstrators cheered when the decision was handed down, with organisers declaring it a victory for the people.

The rally was
one of many to take place across the country on Saturday
aiming to draw attention to the number of Aboriginal and Torres Strait Islander people who have died in custody in Australia.

Leetona Dungay, whose son David Dungay Jr died in Long Bay jail in 2015 after repeatedly shouting "I can't breathe", said she was emotional after becoming aware of the appeal's success.

"We're going to get justice for David today," she told SBS News.

"We are going to march on our land where they put my son's body underneath our feet."

NSW Greens MP David Shoebridge said the appeal’s success was “great news” and urged attendees to be "as safe as we possibly can".

Many protesters had publicly pledged to attend regardless of the court's ruling, with the rally's organisers also promising to hand out face masks and hand sanitiser nearby.

Some demonstrators carried signs saying "Police the police" and "Same s*** different soil", while most breached social distancing rules to hear speakers on the steps of Sydney Town Hall.

There, the crowd chanted "I can't breathe".

"They held my son down for 10 minutes," Ms Dungay said of her son's death in custody.

A young girl holds a sign at a Black Lives Matter rally in Sydney. Source: SBS

"I look around and see so many signs and so many faces - it's overwhelming," Mr Dungay Jr's nephew Paul Silva said.

"This is one of the largest protests I've been to here in Australia, I'm 22 years of age and this is so amazing to see this sort of support."

The more than 10,000 people marched from Town Hall to Belmore Park, where they took a knee at 4:32pm to mark the 432 Indigenous deaths in custody since 1991 and chanted "black lives matter".

Police closed Town Hall railway station at the start of the rally, around the same time a man holding an "All Lives Matter" banner was removed from the area in handcuffs.

Protesters took a knee in Sydney and held a minute's silence. Source: SBS

Earlier, police had warned they could fine or arrest protesters for blocking roads or public transport services and for breaching COVID-19 public health orders.

"Police hold serious concerns about thousands of people gathering together in close proximity in the current health environment, as our priority is always community safety," NSW Police Commissioner Mick Fuller said in a statement late on Friday.

"Police will have a strong presence (Saturday) to ensure the law is obeyed.

"If people choose to disobey the Supreme Court ruling and attend the planned protest regardless, they need to be aware they are doing so unlawfully and police will respond accordingly."

Protest organiser Raul Bassi told the Supreme Court on Friday the protest would go ahead regardless and it would be safer for the court to grant permission so proper social distancing protocols could be put in place.

Police initiated the court action on Friday afternoon to stop the protest, but it became apparent during the four-hour hearing that the rally had never been deemed an authorised public assembly.

Justice Desmond Fagan then refused to approve it, citing the current coronavirus restrictions on mass gatherings.