Tongan seasonal workers in South Australia have come together to pray for their loved ones in Tonga, one week on from the devastating volcano eruption and tsunami that hit the Pacific nation. 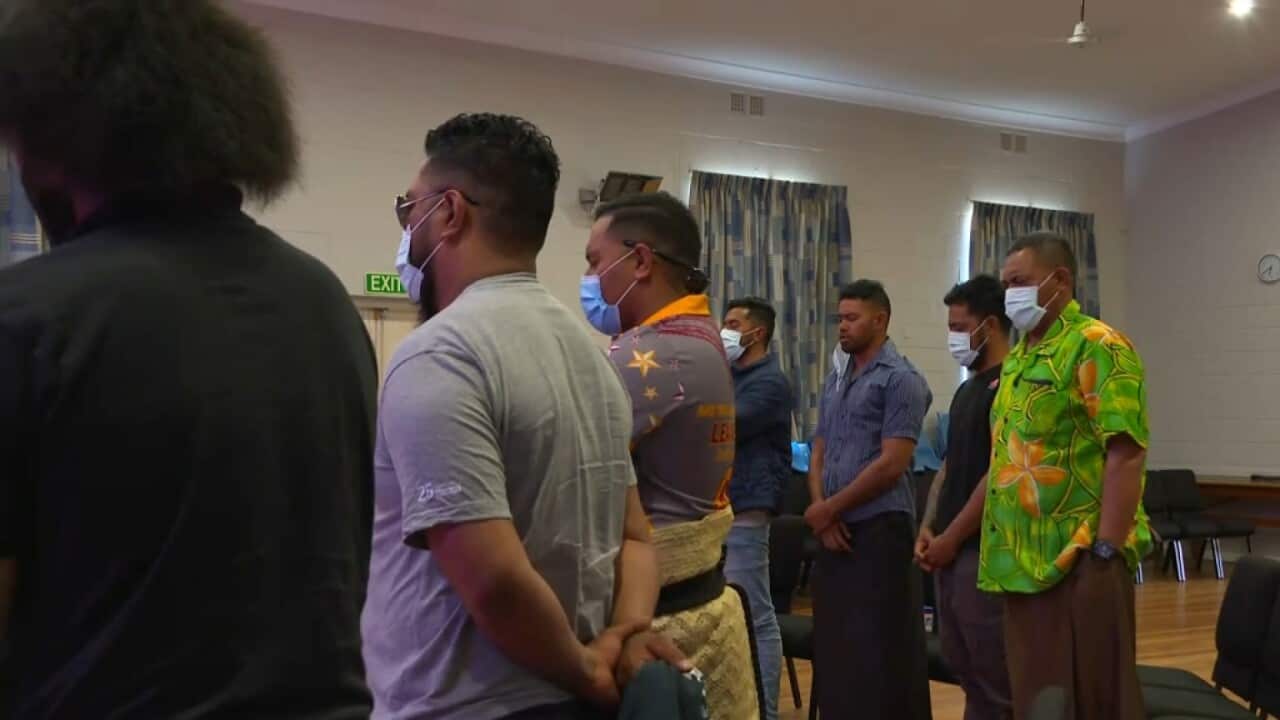 A church service held in South Australia in solidarity for the nation of Tonga, a week after the devastating volcano eruption and tsunami. Source: SBS News

As the search for those missing ramps up following the devastating natural disaster in Tonga, work continues to restore the only undersea cable that connected the country to the outside world.

Power has been restored to 90 per cent of the country and some international phone calls are now available but communication networks largely remain down.

The disrupted services have meant that a number of Tongans working in Australia - as part of the Pacific Island Seasonal Workers program - have yet to hear from their loved ones since the volcanic eruption and tsunami.

Among them are members of a 100-person crew brought over from Tonga in April to help with the fruit harvest in South Australia's Riverland region.

"Some of the boys worry about their families, especially those guys that haven’t heard from their family at home," said Tongan Tevita Eteaki, who helps manage the crew.

“We are sad sometimes because the internet [is] not working. We used to talk to our family after work all the time.”

Mr Eteaki said he was relieved to have heard from his mother, but was informed that the family farm on the country’s main island of  Tongatapu was devastated by ash from the eruption.

"[My little brother and I] were worried about them, we hadn’t heard anything from them. They were so happy to hear from us.

"My mum says that our land that we grow crops for our family looks like nothing because of the ash from the volcano."

Clean up efforts on the ash-covered streets of Tonga's capital Nuku'alofa after an underwater volcanic eruption triggered a tsunami. Source: Supplied

The first foreign aid ship to land was one from New Zealand which arrived in Tongatapu on Friday.

On Saturday, Tongans queued for limited money services that have been restored.

Tonga's government said drinking water was the priority, and a national emergency team had already distributed 60,000 litres to residents.

The official death toll from the disaster sits at three.

Mr Eteaki said the internet outage has meant his family has been unable to withdraw money from the bank to purchase goods.

"They will need water to drink and some food."

'Every time we struggle with something, we say a prayer'

In a show of solidarity with the group, a church service was organised by the South Pacific Island Council of South Australia on Saturday in Paringa, 260 kilometres east of Adelaide.

"We feel happy because of the community here who visit us and make us strong. We miss our church services in Tonga, we used to pray every day. On Sunday we do nothing in Tonga, we just go to church.

“[This service] reminds us of what we used to do in Tonga.

“Every time we struggle with something, we say a prayer, because we know that God is looking after us while we are here.”

The Australian Defence Force has deployed a range of resources to provide aid to the nation, with an air force flight carrying essential aid supplies arriving in the capital Nuku'alofa on Thursday.

Mr Eteaki said he is thankful for the aid that has arrived, but said families will be keen to get their crops growing again.

"I want to say thank you so much to the Australian government and the SA government for letting us come here and work to earn money for our families back home."

It comes as Save the Children pledged to provide cash assistance, school bags, hygiene kits to affected families as it is anticipated the scheduled start to the school year will be pushed back while the full extent of the damage is being assessed.

The CEO of Save the Children Fiji, Shairana Ali, said the organisation is concerned for the mental wellbeing of children in the Pacific nation, with the natural disaster causing a lot of distress and anxiety.

"There is absolutely a need for psychosocial support and counselling for children," she said.

"We still don't have a lot of information about how families have fared on those low-lying islands, so we are very concerned for the safety and the wellbeing of children."

Australian telecommunications company Telstra said it assisted the Australian government to get satellite equipment to Tonga; and it will be waiving charges for landline and post-paid phone users in Australia to call Tonga over the next seven days.

The company is in the middle acquiring Digicel Pacific, which provides phone coverage in Tonga.

Digicel Pacific calls services are back up through a satellite link, but won't be fully restored until the undersea cable linking Tonga to Fiji is fixed.