Victoria has banned the Nazi swastika. Faith groups say their ‘sacred symbol’ will be liberated

Victorians who intentionally display the Nazi swastika face penalties of up to nearly $22,000, 12 months in jail, or both. 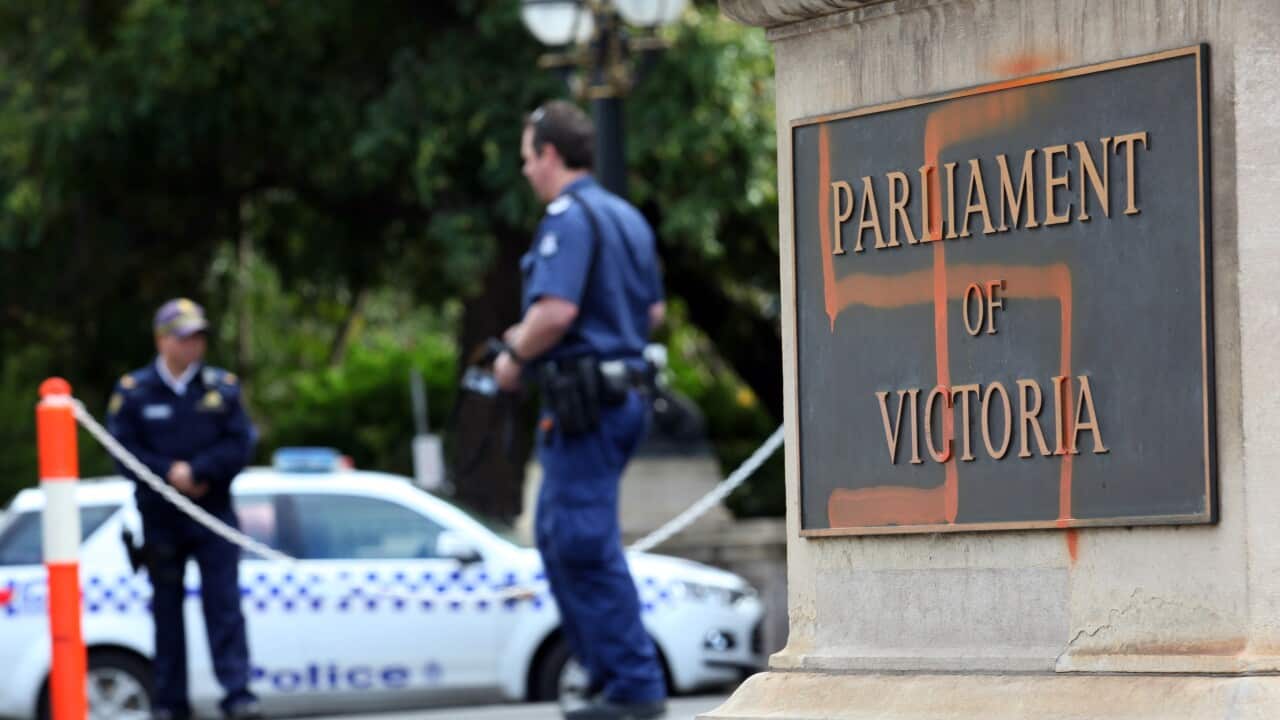 The law makes it a criminal offence for anyone to intentionally display the Nazi symbol in public in Victoria. Source: AAP / DAVID CROSLING

Faith groups in Victoria have welcomed the state government's decision to pass legislation banning the public display of the Nazi symbol on Tuesday evening.

Vice President of the Hindu Council of Australia Surinder Jain says he thinks the bill will help battle public confusion around the difference between the Nazi symbol and the ancient Indian swastika.

"Our swastika has been in an indoor prison," Mr Jain told SBS News.

Advertisement
"Because when we display it people misunderstand it to be the Nazi hate symbol Hakenkreuz - the hooked cross.

The swastika is an ancient religious symbol in India that has been used by Hindus for over 2,000 years.
READ MORE
Queensland to follow Victoria with ban on Nazi and other hate symbols
Victoria's Jewish community also welcomed the bill, but for other reasons.

"First of all, it represents the final solution. That is the extermination of six million Jews in gas chambers in open fields.

"It represents the desire by the Third Reich to eliminate every single Jewish person on earth.

"It is the ultimate emblem of evil.
"It represents mothers being led with their babies into the gas chambers in Auschwitz — of babies skulls being crushed, of entire families being executed in towns and in open fields.

"There is no more pure evil symbol than the Nazi swastika. And for a Jewish person, whether they are a Holocaust survivor, or their children or their grandchildren, being confronted with this emblem of absolute evil, is as threatening as being confronted by a gun."

Mr Abramovich said the passing of the bill was a "triumphant and uplifting" moment for every Victorian.

The bill, hailed as a "thunderous blow" to white supremacists when
it was introduced last month
, was passed in parliament on Tuesday evening.

It makes it a criminal offence for anyone to intentionally display the Nazi symbol in public, and those who do will face penalties of up to nearly $22,000, 12 months in jail, or both.
People will only be charged if they do not comply with a police directive to remove the symbol.

Victorian Attorney-General Jaclyn Symes said the swastika glorified one of the most hateful ideologies in history, and its public display did nothing but cause further pain and division.
READ MORE
Tasmania joins push to ban public display of Nazi and other hate symbols
"It's a proud moment to see these important laws pass with bipartisan support," she said.

"I'm glad to see that no matter what side of politics, we can agree that this vile behaviour will not be tolerated in Victoria."

Religious versions of the symbol tied to Hindu, Buddhist and Jain faiths will remain legal.
There will also be exemptions for historical, educational and artistic purposes, while memorabilia bearing the Nazi swastika can still be traded as long as the symbol is covered when on public display.

The legislation will come into effect in six months' time to allow for a campaign about the origins of the religious and cultural swastika to be rolled out, the state government said.

Queensland
,
NSW
and
Tasmania
have all announced plans in recent months to follow Victoria's lead.