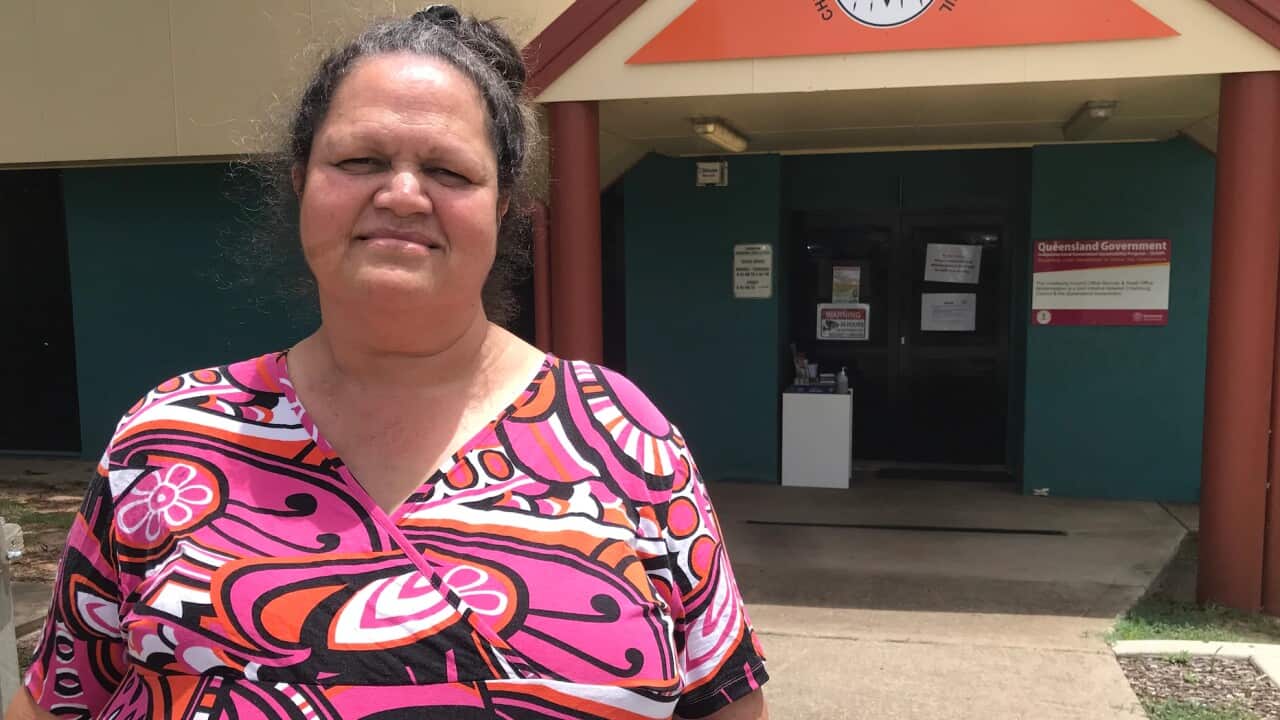 The Indigenous community of Cherbourg in Queensland kept COVID-19 at bay for nearly two years. But in just two weeks, one in 10 people contracted the virus. SBS News travelled to the town to see how the outbreak is being managed in a vulnerable community.

Published Saturday 15 January 2022
By Amelia Dunn
Source: SBS News
On the outskirts of Cherbourg cemetery sits an unmarked mass grave. It is said to be the resting place of around 90 Indigenous residents who died during the Spanish flu outbreak just over a century ago.

The small regional town - formerly known as Barambah - was hit disproportionately hard in 1919 when the virus made its way into the community. Within three weeks, one-sixth of the population would die.

100 years on and the existence of the mass burial site acts as a stark warning for the approximately 1,500 residents as the town battles an eerily similar threat: COVID-19.

Advertisement
“We don’t want history to repeat itself and that’s why we’re working very hard to make sure that doesn’t happen,” mayor Elvie Sandow says.

Cherbourg - 250 kilometres northwest of Brisbane - is in the midst of a public health crisis.

Cherbourg is dealing with a COVID-19 outbreak. Source: AP

Like several vulnerable Indigenous communities around Australia, Cherbourg had successfully kept COVID-19 out of the community by erecting a checkpoint to prevent anyone other than essential services from entering for nearly two years.

But when Queensland's borders reopened in December, the checkpoint was dismantled, and infections began to climb - and quickly.

Now, around one in 10 residents in Cherbourg - where 98 per cent of people identify as Aboriginal - have tested positive for the virus.

One in 10 Cherbourg residents have tested positive. Source: SBS News

Ms Sandow said initially there was a “big panic”  and “people were scared”.

The Queensland Government listed the total number of cases as 104 on 13 January, with 52 under investigation.

And while the infection rate has this week slowed from dozens to three to four new infections per day, the Cherbourg Aboriginal Shire Council suspects the true number could be much higher.

Despite a concerted effort by both the Queensland Government and Cherbourg Regional Aboriginal and Islander Community Controlled Health Service (CRAICCHS), the town has only managed to fully vaccinate around 60 per cent of its population aged over 15 so far.

The latest data from the Queensland Government says as of 9 January, 69.6 per cent of residents had received one dose, with 59.7 per cent fully vaccinated. It notes data issues in the LGA may impact coverage rates.

CRAICCHS health worker, Uncle William Button, says there initially there was a lot of misinformation spreading in the community via social media and he and his team have been trying hard to convince people to get vaccinated to protect themselves and those who are vulnerable.

“I try to tell them; if it does get in, it’ll affect our Elders, or people on dialysis, and many people here have diabetes, so it will affect them in some way.”

I try to tell them; if it does get in, it’ll affect our Elders. - Uncle William Button, health worker

“I think they’re seeing the benefits; it’s for their own health and community.”

But a significant proportion of the community is still hesitant, fuelled by a historic distrust of government.

Michelle Bligh, who was born and raised in Cherbourg, says she and many others she knows don’t trust the vaccine. They believe they are being coerced by authorities into getting it.

“It’s very concerning and it’s starting to traumatise people … not only me, but others in the community too,” she says.

“No one’s quite answering our questions, we see them go on the media, but not speaking to the community face to face.”

Queensland Premier Annastacia Palaszczuk visited Cherbourg in November and said people were going "door to door" in the community. The town was seeing "really good results" with the vaccination rate increasing, she said.

Australia's Therapeutic Goods Administration (TGA) advises getting vaccinated is "the most effective way to reduce deaths and severe illness from infection". More than 44 million doses have been administered so far in Australia with the TGA identifying 11 reports of death linked to vaccination.

One resident who decided it was now time to get vaccinated is 19-year-old Beau Jackson. He's rolling up his sleeve to get his first Pfizer shot at the CRAICCHS clinic.

19-year-old Beau Jackson decided to get vaccinated so he could go out with his friends. Source: SBS News

“With everything going on with Covid in the community now, it was about time I got it, especially if I want to go places,” he says.

It was about time I got [vaccinated], especially if I want to go places. - Beau Jackson, Cherbourg resident

Mr Jackson says when the vaccine mandate was introduced on 17 December, he was unable to go to the pub with his friends.

“They’d all got their vaccines, and they’re all fine, so I thought it was time I got mine.”

'We can beat this'

Cherbourg’s clinic is staying open seven days a week and has also begun to offer the vaccine to children aged five to 11 in line with the national rollout.

While the town hasn’t been officially put into lockdown, local authorities are currently asking people to stay home as much as possible.

“We’re telling people to stay home, wear masks, go down and get checked if you’ve got symptoms, and if you’re not vaccinated, please get vaccinated,” Ms Sandow says.

More than 100 food and hygiene packs have been delivered by the Council, CRAICCHS, and charities including Fare Share and Foodbank to make sure each household is supported.

CEO of the Cherbourg Aboriginal Shire Council Chatur Zala says so far only two of the town’s cases have been admitted to hospital and neither were in ICU.

“The low hospitalisation rate is very promising and it makes us confident we can beat this virus.”

The vast majority of cases are being managed at home, and are mild, and Mr Zala says he believes this outbreak has been more manageable because some residents are vaccinated and because the community is dealing with the Omicron variant, rather than Delta.

“If we had a Delta outbreak,  it would have been a different story,” he says.

“While Omicron does appear to be less severe compared to Delta, especially in those vaccinated, it does not mean it should be categorised as mild,” he told reporters in Geneva.

And Mr Zala says regardless of the strain, the community in Cherbourg is understandably worried. He hopes to reassure them every scenario has been planned for.

“Cherbourg is the closest Aboriginal community to Brisbane - we knew it was going to come. We have been preparing for this scenario for a year and a half.”