Donald Trump has repeatedly said that a coronavirus vaccine could be available before the November election. 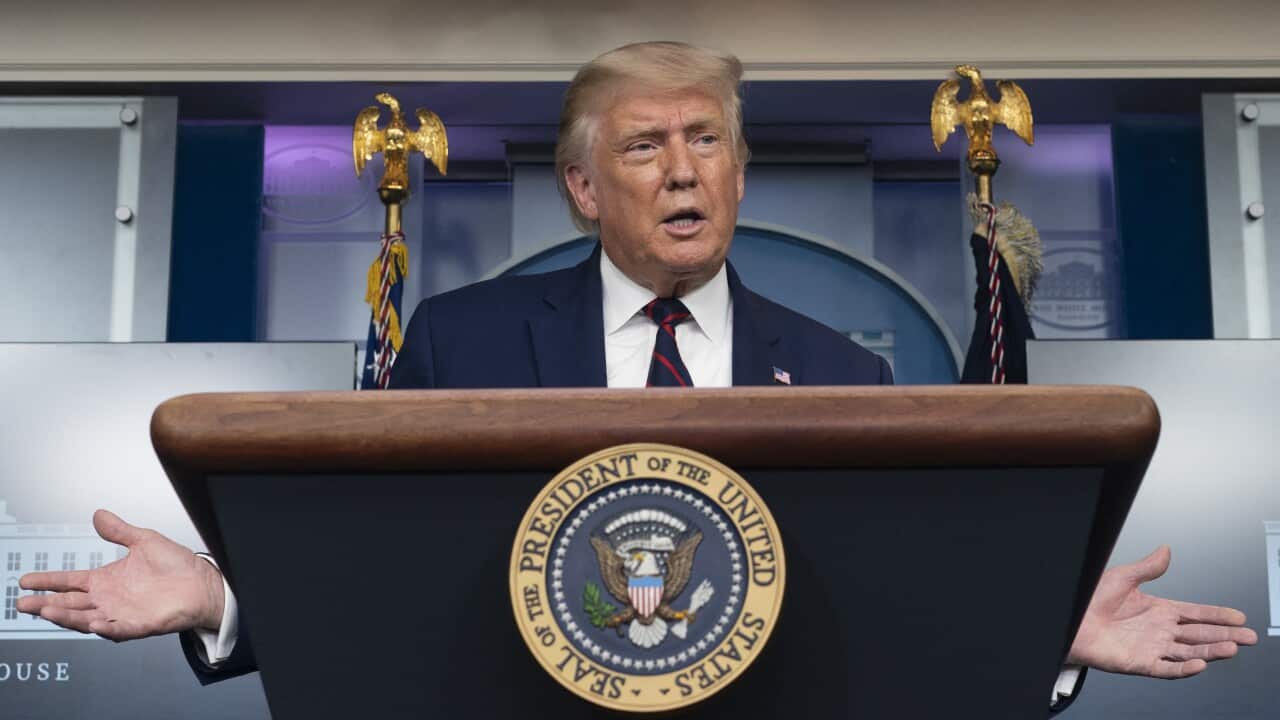 Donald Trump has repeatedly hinted that a vaccine could be publicly available before the November 3 election. Source: AP

Experts have cast doubt on President Donald Trump's ability to produce a safe coronavirus vaccine before the upcoming US election.

Mr Trump has repeatedly hinted that a vaccine could be publicly available before the 3 November election.

“We're going to have a vaccine very soon, maybe even before a very special date,” he said during a White House news conference on Monday.

Dr David Smith, a Senior Lecturer in American Politics and Foreign Policy at the University of Sydney, told SBS News Mr Trump sees a vaccine as a quick fix to the health crisis that has plagued the US since February.

He said Mr Trump sees a COVID-19 vaccine as a potential “game-changer that could save his presidency”.

“He prefers the idea that there could be a vaccine that could solve all the problems instead of having to go through things like lockdowns and mask mandates,” Dr Smith said.


“And he seems increasingly desperate now to get a vaccine before the election.”

But the likeliness of Mr Trump actually achieving that by the November election is not high.

“No one else who is associated with the development of vaccines is suggesting it could happen that quickly,” Dr Smith said.

“But Trump is going to keep talking about it as part of his re-election campaign. Throughout the pandemic, he has emphasised these kinds of miracle solutions to the problem.”

The White House has funnelled billions of dollars into drug companies with the hopes of being the first in the world to produce a COVID-19 vaccine.

The timing with the 3 November election has prompted concerns about the safety and efficacy of a vaccine produced by that date.

Dr Anthony Fauci, the US government's top infectious diseases expert and a member of the White House coronavirus taskforce, told CNN it was unlikely a vaccine could be produced by October, saying it was unlikely to be approved by the Food and Drug Administration (FDA) unless it was safe.

“These are all guesstimates,” he said.

“It is conceivable that you could have it by October, though I don’t think that’s likely.”

Dr Smith said it’s doubtful an unsafe drug would even get through the necessary stages and processes to be released to the public.

“At this point, I don't think that the FDA has been compromised to the extent that they would allow an improperly tested vaccine onto the market,” he said.

On Wednesday,
trials of an Oxford University coronavirus vaccine were put on hold after a participant experienced a serious adverse reaction
, with an independent committee now reviewing the data.

Many Americans are sceptical of a vaccine

Dr Smith said the real danger is that Americans aren’t going to trust the vaccine when it does appear.

“They’re going to believe it was developed too quickly, and developed under political pressure,” he said.

A Gallup poll published in August found that 35 per cent of Americans said they would not get a free, FDA-approved vaccine if it was ready today.

“That reflects their specific concerns around new vaccines, and particularly this one, because of the way the development has been covered.

“It has been presented like a race with very high political and economic stakes, and everyone knows that Trump wants to get it out as quickly as possible.

“So there’s going to be an enormous public trust problem whenever the vaccine does appear.”

White House hopeful Joe Biden has also weighed in on the public reluctance, saying he wanted transparency and scientific facts on any future vaccine.

"I'm worried if we do have a really good vaccine, people are going to be reluctant to take it. So he's (Mr Trump) undermining public confidence," Mr Biden said.

Mr Trump, who is behind in national polls, fired back saying his rivals in the 3 November vote had both delivered "reckless anti-vaccine rhetoric”.

"It's so dangerous for our country what they say," Mr Trump told a press conference.

"The vaccine will be very safe and very effective."

On Tuesday,
the CEOs of nine companies developing vaccines against COVID-19 pledged to "uphold the integrity of the scientific process"
amid concern Mr Trump will pressure regulators to approve a vaccine ahead of the election.

‘Trump has made all kinds of ridiculous claims’

The US has the highest number of coronavirus cases and deaths in the world, with 6,301,321 infections and 189,215 fatalities, according to figures from Johns Hopkins University.

Dr Smith said the pandemic had exposed the country’s weaknesses when it came to handling a health crisis, but noted that any improvement to those numbers going forward might help Mr Trump’s re-election bid.

“The numbers have been so bad that any improvement might be able to help him,” Dr Smith said.

“At the moment, we are seeing a bit of an easing of the worst of the numbers. Deaths look like they're about to come down below 1,000 a day. The number of cases a day has dropped - it was up at 70,000 only a month or two ago.

“So with all of that dropping, they're going to say it's improving. I think that's going to be the only chance that they've got to convince people that they're actually doing okay.”

Dr Smith also said Mr Trump’s claims about how well the US has contained the virus are baseless.

“Trump has made all kinds of ridiculous claims about how the US is the envy of the world and every other country is so much worse off, and claiming that the US has one of the best mortality rates in the world, and the best testing in the world,” he said.

“None of this is true. And I think most people, other than his supporters, don't believe that.

“But people might be receptive to the idea that the US has been through something really bad, and is now doing better.”

People in Australia must stay at least 1.5 metres away from others. Check your state’s restrictions on gathering limits. If you are experiencing cold or flu symptoms, stay home and arrange a test by calling your doctor or contact the Coronavirus Health Information Hotline on 1800 020 080. News and information is available in 63 languages at
sbs.com.au/coronavirus