Women dress as ‘handmaids’ to protest US anti-abortion bill

Protestors say the bill is a cynical attempt to circumvent constitutional abortion rights by blocking a safe and common procedure. 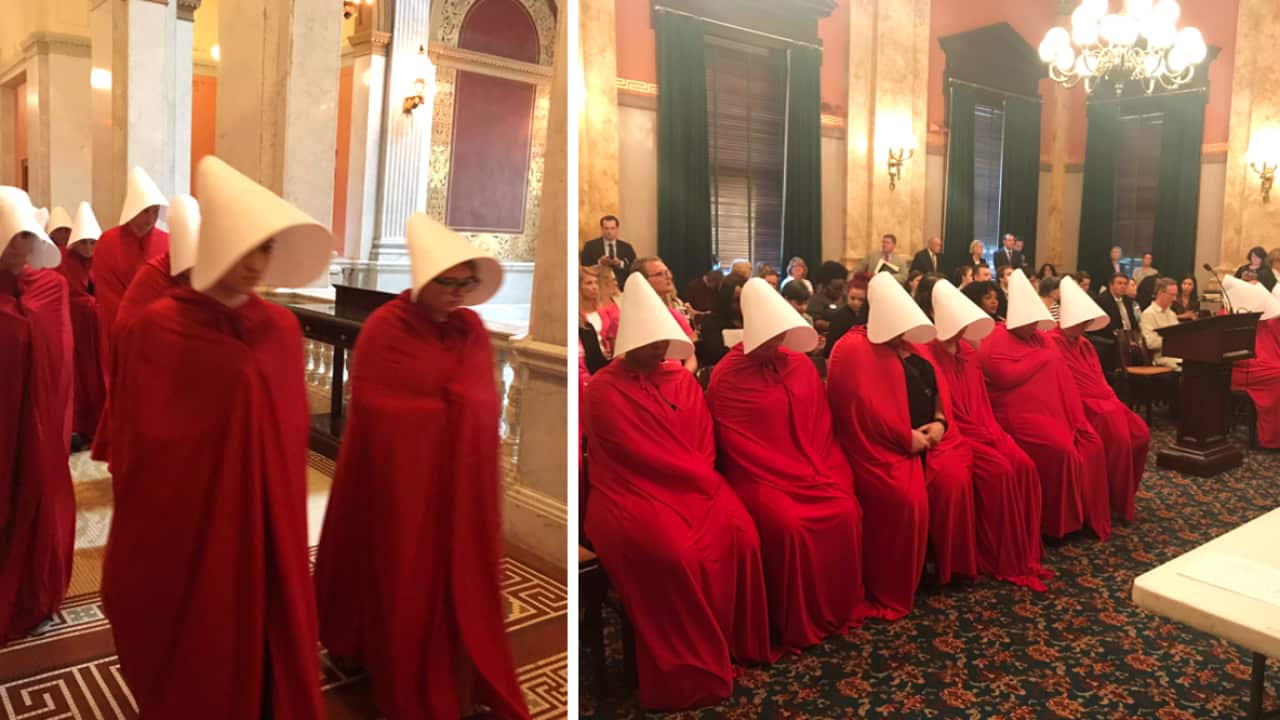 After discussion by security about what to do when the protestors arrived early to the room, they were allowed to stay for a hearing on the bill. Source: NARAL ProChoice Ohio

Sixteen women in the US state of Ohio have dressed as characters from the dystopian TV show 'The Handmaid’s Tale' to protest a proposed bill which would ban the most common procedure for second-trimester abortions.

Based on the Margaret Atwood novel of the same name, the show explores a dystopian future in which ‘handmaids’ are captured and forced to become pregnant surrogates after fundamentalists take control of the United States.

Donning white bonnets and red robes, the women staged a silent protest against a state bill which would ban the ‘dilation and evacuation’ abortion method – which health experts say is the safest and most common abortion procedure for women in the 12th to 23rd weeks of pregnancy.

Advertisement
The procedure, described as ‘dismemberment abortion’ in the legislation, involves removing fetal tissue through the cervix using a range of medical instruments.

The wording of the legislation itself borrows from anti-abortion activists' talking points, describing tools which “slice, crush and/or grasp a portion of the unborn child’s body to cut or rip it off.”

Exemptions exist in cases where the mother’s life is endangered.

The legislation is part of a coordinated effort by the National Right to Life anti-abortion lobby group, which has successfully campaigned for similar legislation in several other states.

Roughly eight per cent of abortions in the United States are performed in the second trimester.

Anti-abortion activists say they are seeking to prevent a brutal medical procedure, but opponents of the bill say the move is a cynical attempt to circumvent constitutional abortion rights by blocking a safe and common method.

Ms Miracle said the demonstration was inspired by a similar 'handmaids' protest in Texas earlier this year.

'The Handmaid’s Tale', one of the year’s most critically acclaimed shows, has inspired several similar protests against anti-abortion legislation.

The entire series will be available to Australian viewers on July 6, when it premieres on
SBS On Demand
.