While Scott Morrison has hailed the pact as an important move for Australia's interests, it's also been criticised as "a stab in the back" that'll see "floating Chernobyls in the heart of our major cities". 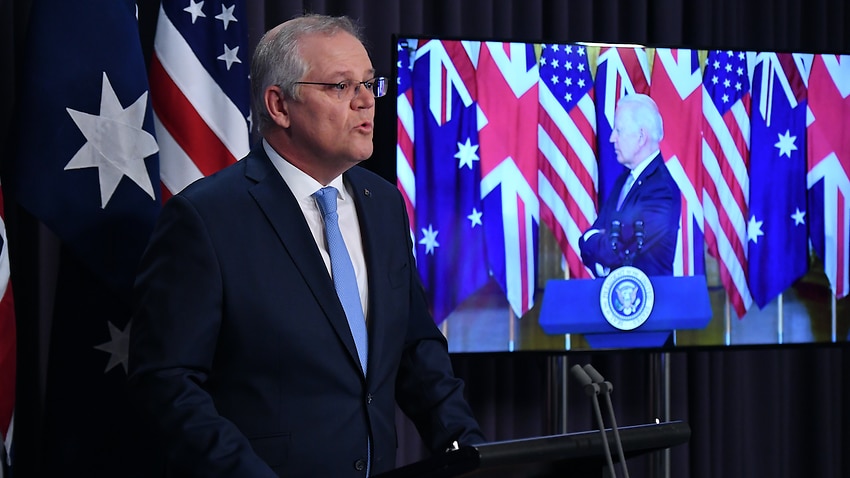 Australia’s forging of a historic new defence pact with the United States and Britain that will give it access to nuclear-powered submarines has divided opinion, prompting scepticism at home and fury from France and China.

The new pact - to be known as AUKUS - has been described by Prime Minister Scott Morrison as a “forever partnership” formed in the face of an increasingly difficult strategic environment.

The first significant outcome of the pact will see Australia get access to secret US nuclear submarine technology to build a new fleet in Adelaide.

Sam Roggeveen, director of the international security program at the Lowy Institute, said it remains to be seen whether the move will make Australia safer in the long term.

“I wouldn’t underestimate the significance of this in historical terms - it is a very big deal,” he told SBS News. “But whether it makes Australia safer in the long run is an open question.”

The AUKUS partnership also comes with an eye-watering price tag, having resulted in a $90 billion submarine deal with French company Naval and the French government being torn up.

It’s thought at least $2.4 billion in taxpayer funds has been paid so far for those diesel-powered submarines, but the full compensation has not been made public.

Uncertainty now also surrounds the group’s 350 employees in Australia, which had a projected workforce of 1,700 during the construction phase.

“This path is not a change of mind, it's a change of need,” he told reporters in Canberra.

“We have entered, no doubt a new era, with new challenges for Australia.”

The Prime Minister has also sought to provide assurances that Australia is not becoming a nuclear weapons state.

“This is not about acquiring nuclear weapons. Australia has no interest in that. No plans for it, no policy for it, no contemplation of it. It's not on our agenda,” he said.

Mr Morrison has also said Australia will not be required to develop a civil nuclear power capacity to maintain the vessels, with the prospect of acquiring this capability having been politically fraught for years.

“It's not too much of an exaggeration to say that Australia acquiring nuclear-powered submarines was a fringe position not too long ago,” Mr Roggeveen said.

Labor was briefed ahead of the announcement and is for now providing conditional support, but wants more transparency around the cost of the transition.

Others - including former Labor prime minister Paul Keating - have raised concerns over the implications of the shift towards relying more heavily on the capabilities of strategic allies.

“This arrangement would witness a further dramatic loss of Australian sovereignty, as materiel dependency on the United States robbed Australia of any freedom or choice in any engagement Australia may deem appropriate,” he said in a statement.

Greens leader Adam Bandt has also criticised the decision as a misstep that risks aggravating, rather than de-escalating, tensions with China.

“This is a dangerous move that will make Australia less safe by floating Chernobyls in the heart of our major cities,” he said.

Independent senator and former submariner Rex Patrick said he wants a Senate inquiry into the submarine overhaul once parliament returns.

“We have to be very careful that we're not jumping out of the frying pan into the fire,” he told reporters on Thursday.

“This is a very ambitious task that we're taking on.”

'Stab in the back'

France's Foreign Minister Jean-Yves Le Drian has been quick to express anger over Australia's shelving of the Naval deal.

"It's really a stab in the back. We had established a relationship of trust with Australia. This trust has been betrayed," he told France Info radio.

"I'm very angry today, and bitter... This is not something allies do to each other.

"This sudden and unforeseeable decision very much recalls what Mr Trump would do," he added, referring to former US president Donald Trump.

Defence Minister Florence Parly called Australia's about-face "very bad news with regards to keeping one's word", while adding that France is "clear-eyed as to how the United States treats its allies."

"In terms of geopolitics and international relations, it's serious," she told RFI radio.

“The US, UK and Australia are engaging in cooperation in nuclear-powered submarines that gravely undermines regional peace and stability,” he said.

“The relevant countries should abandon the obsolete cold-war zero-sum mentality and narrow-minded geopolitical concept, respect regional people’s aspiration and do more that is conducive to regional piece and development – otherwise, they will only end up hurting their own interests.”

Indonesia on Friday called on the Australian government to maintain its commitment towards regional peace and stability.

“Indonesia is deeply concerned over the continuing arms race and power projection in the region,” a spokesperson for Indonesia’s Ministry of Foreign Affairs said in a statement.