According to the Australian Bureau of Statistics’ Population Clock, Australia's population will reach 25 million people just after 11pm AEST on Tuesday 7 August 2018.

Australia has the 53rd largest population in the world, one place behind North Korea and ahead of Côte d’Ivoire, and its population accounts for 0.33 per cent of the global total.

"This is quite unusual for a more developed country". 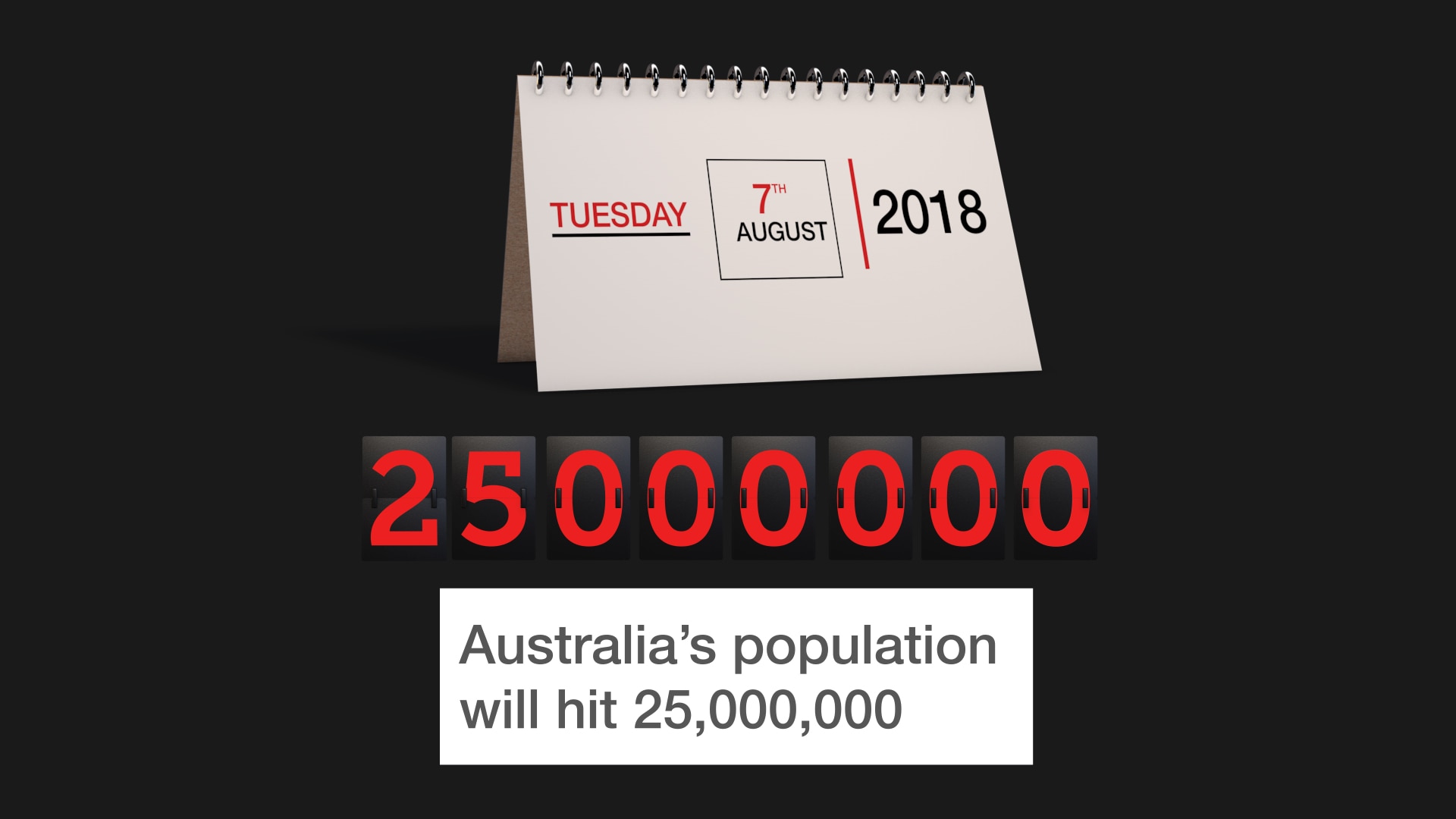 What's the current growth rate and what’s causing it?

Australia’s population grew by 1.6 per cent throughout 2017, according to the ABS’s population data. It assumes an overall increase of one new person every 83 seconds based on an average of:

Australia also has an older population than ever before. In 1901 the median age was 22.5 years, which rose to 27.5 by 1970 (when Australia had half the current population) and again to 37.3 last year. 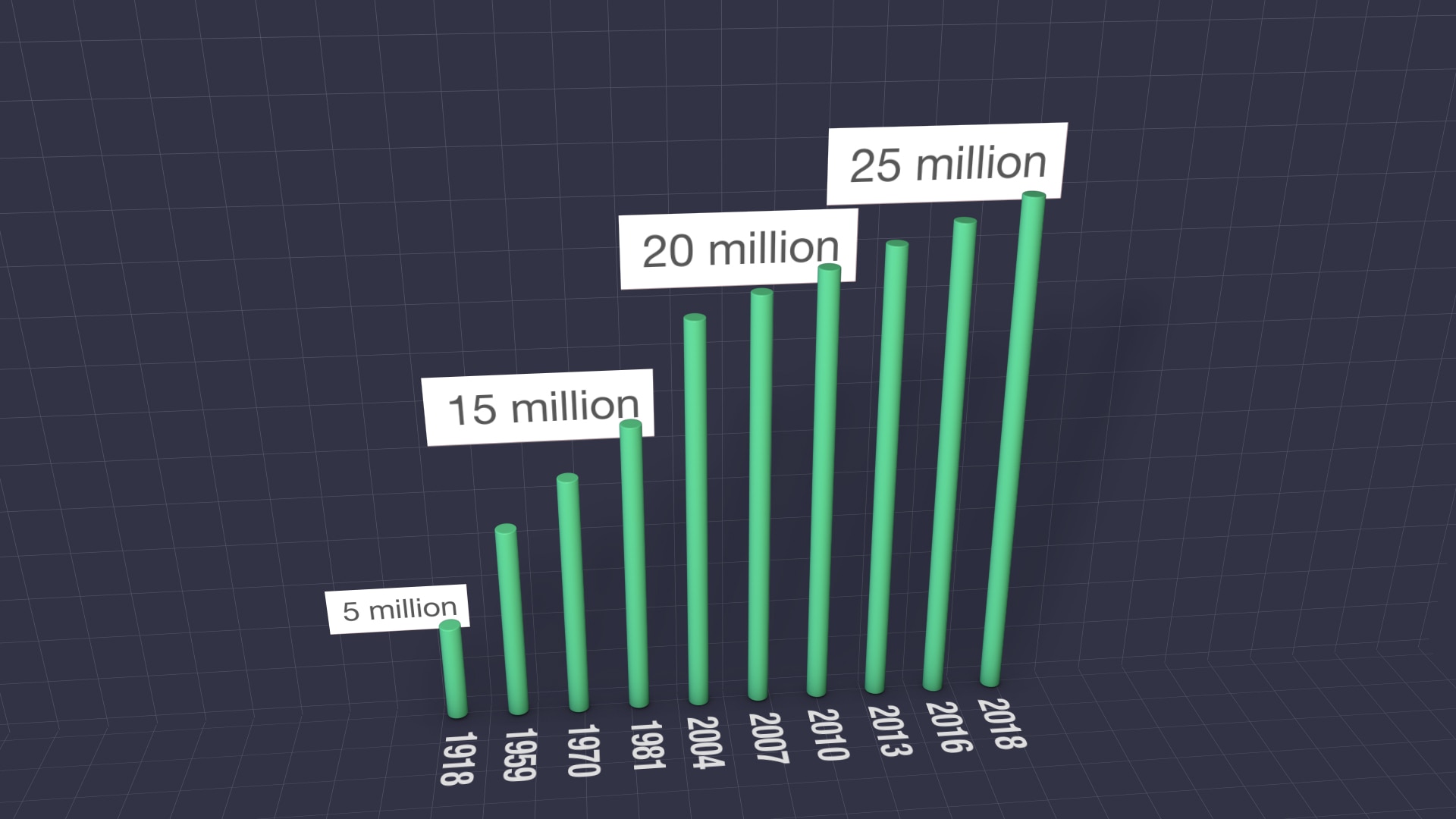 Women make up the majority of the country's population, with 98 males per 100 females. At federation in 1901, there were 110 males to every 100 females. There is not yet enough data to analyse a growth of non-binary-identifying individuals.

Where are people living in Australia?

Most Australians (67 per cent) are living in capital cities, according to the ABS.

Only Tasmania (44 per cent in Hobart) and Queensland (49 per cent in Brisbane) buck the trend.

Despite experiencing some of Australia’s highest levels of population growth during the mining boom, growth in Western Australia was just one per cent.

How does it compare to other countries?

A report by the United Nations put the global population increase over 2017 at 1.1 per cent, compared to Australia’s 1.6 per cent rise. The World Bank data shows most countries with high population growth are developing nations where access to sex education and birth control is less common.

But Dr Liz Allen, a Demographer at the Australian National University Centre for Social Research and Methods, said people often fixate on population size and growth.

"Higher population growth on a lower population base like Australia delivers a different rate of change in size, than a small rate of growth on a very large population, like in the US,” Dr Allen told SBS News.

“If we look to other indicators of population comparisons, such as population density, Australia is behind that of similar countries.”

The United Nations expects between now and 2050, based on current trends, half the world’s population growth will be in just nine countries: India, Nigeria, the Democratic Republic of the Congo, Pakistan, Ethiopia, the United Republic of Tanzania, the US, Uganda and Indonesia.

How has migration played a role?

Australia’s first federal immigration portfolio was created at the end of World War Two to encourage the migration of displaced people from wartorn Europe. More than 7.5 million people migrated to Australia between 1945 and 2013, according to Home Affairs data.

Australia’s population increased by 388,000 in 2017. Sixty two per cent (240,000) of that number was due to net migration, the number of migrants who arrive minus the number who leave. Sixty two per cent of the population increase last year was due to net migration.
SBS News

It was revealed last month Australia’s permanent migration levels - the number of people who come to Australia to live - has fallen to its lowest point since 2007 when under the Howard government.

How big will Australia's population get?

The growth largely depends on government policy. Immigration numbers will be particularly influenced by who forms government in the future.

Over the last three years, Australia’s overall population has grown by around 400,000 per annum. If this trend continues, social research firm McCrindle projects it could hit 26 million as early as 2020, 30 million in 2030 and 40 million in 2048.

“We could feasibly be twice of where were are currently in 2070.”

The 25 million milestone comes amid concerns infrastructure in some of Australia’s biggest cities, particularly in those along the east coast, is being put under pressure population growth.

Dr Liz Allen said there’s plenty of room for new Australians away from the east coast and in regional areas, many of which are looking for skilled migrants.

“Migrants fill positions that locals are either not adequately skilled for or do not want to take. This is something that Australia should capitalise on,” she said. 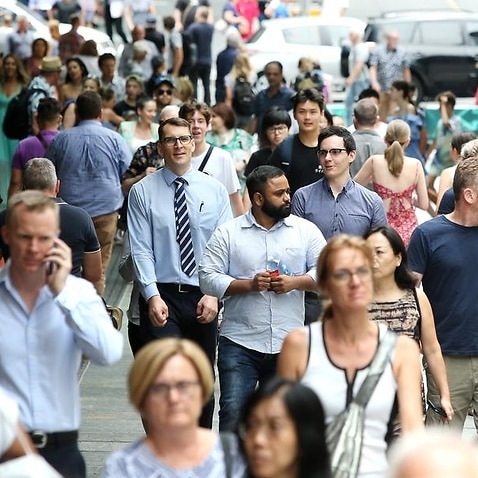 But keeping people in regional areas is easier said than done - and according to some, unfair.

“The problem that we face at the moment is that we don’t really have a model for successfully settling large numbers of migrants away from the major cities,” Professor Parr said. “That's something that really needs research and experimentation."

SBS News reported in July the Turnbull government was working on visas to bind migrants to rural areas, following data from Home Affairs claiming one in 10 skilled migrants settling in regional areas move to a city within 18 months.

Mr McCrindle said the answer to any overcrowding issues could be as simple as better city planning.

"It's not about population as much as it’s about responding to the trends. It’s about planning for the growth," he said.

"If we look at New South Wales, Victoria, and Queensland as well, in the last decade they’ve responded to the new growth realities and put a lot of investment in place. We've played a bit of catch up, but we're getting on top of it.”