It comes as the US joined global efforts to halt fighting over the Nagorno-Karabakh region.

Ethnic Armenians and Azerbaijanis in Australia expressed their heartbreak and anger over the reignited conflict between the two countries, as they took to the streets to have their side of the story heard.

Australian Armenians staged a rally in Sydney on Saturday afternoon, calling for the Australian government to condemn the fighting between Armenia and Azerbaijan over Nagorno-Karabakh.

The region is internationally recognised as part of Azerbaijan, but populated by ethnic Armenians, and has been the source of recent fighting described as the worst outbreak in more than 25 years.

Demonstrators marched through the city's CBD, calling for world leaders including Prime Minister Scott Morrison, to condemn what they say are attacks on Armenians by Turkish and Azerbaijani forces.

The rally could go ahead after the NSW government this week eased COVID-19 restrictions that allow 500 people to gather in a public protest.

The Armenian community protest for peace in Nagorno-Karabakh was allowed to go ahead as the NSW government this week changed COVID-19 restrictions. Now 500 people can gather for a public protest. ⁦@SBSNews⁩ pic.twitter.com/x6pFmAOrUp

"I am emotional, because like I said, it is not just a piece of land, for Azerbaijan it is just territory, but for us it is out heritage, it is our absolute existence," one protester, Melanie Tchakmadjian, told SBS News.

"Australia cannot remain silent and sit on the fence while Armenians are being murdered and their homeland is being ripped apart. It must act with the same humanity and resolve as it did when it came to the aid of survivors of the Armenian Genocide a century ago.”

The Ottoman Empire's extermination of about 1.5 million Armenians over the course of a decade from April 1915 is considered by some countries - including Armenia - to be genocide, which Turkey disputes. However, there is no intentional consensus.

While 29 nations and two Australian states - NSW and South Australia - recognise the mass killing as genocide, the federal government has not taken that step, and Armenian leaders blame the Australian government's diplomatic relationship with Turkey. 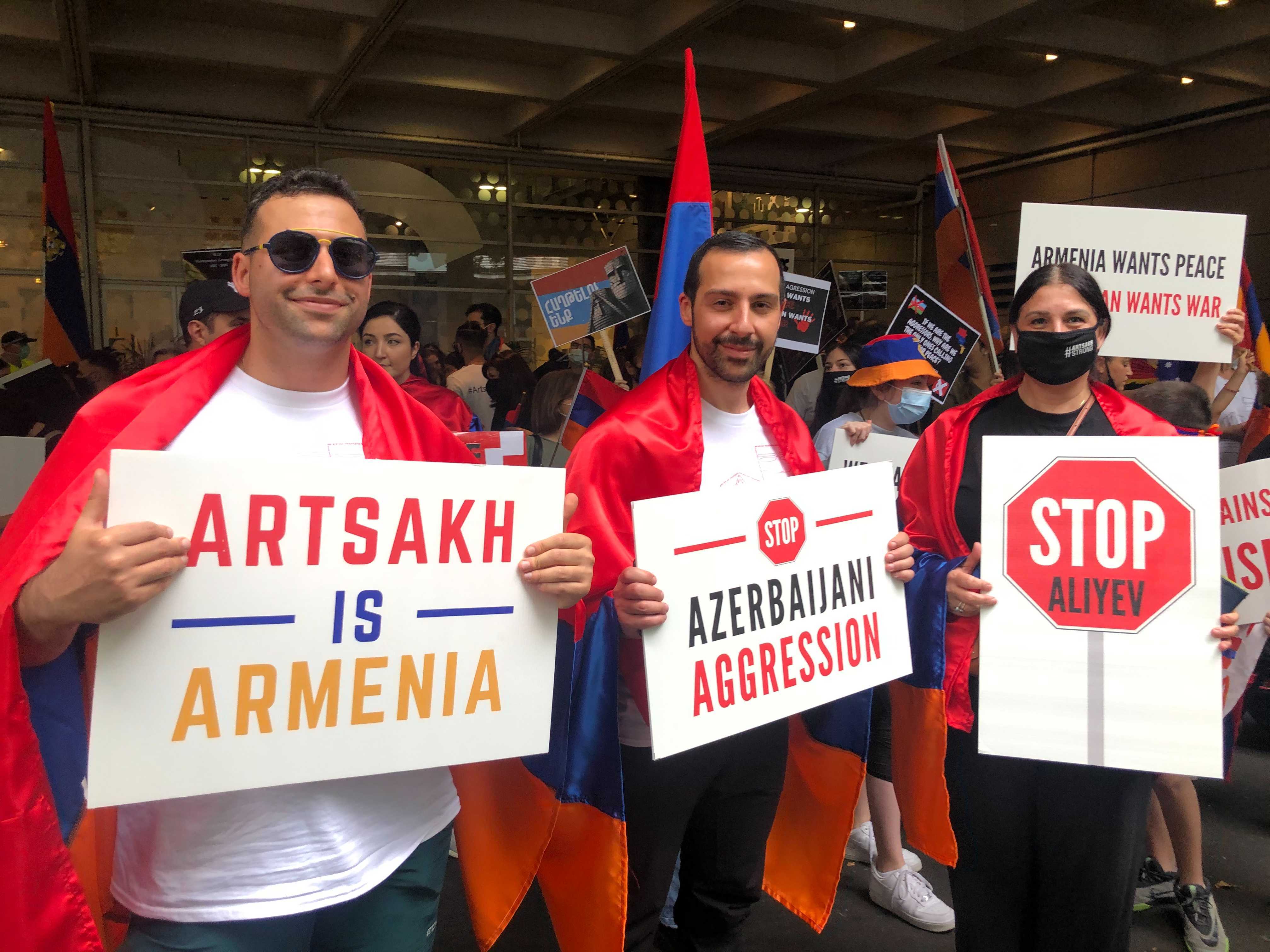 Australia has a smaller Azerbaijani community, but it is just as passionate. Members also gathered on Saturday, using trucks to tell their side of the story.

Nizami Jafarob immigrated from Azerbaijan to Australia 10 years ago to study, and said he fears for his family's safety, who live in the capital, Baku.

"I think as many Azerbaijanis living in Australia, we do worry about our families," he told SBS News. 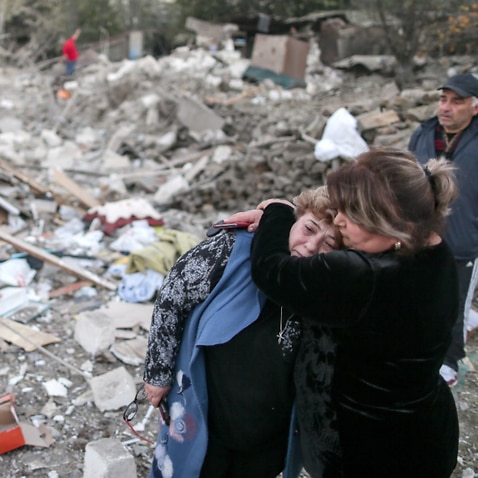 Nagorno-Karabakh: Armenia and Azerbaijan declare a 'humanitarian truce' after weeks of deadly fighting

Mr Jafarob said he “feels love” for both Australia and Azerbaijan, which is why the rally is important to him.

“We are not a big community here. But I think Australia is a country that allows even the smallest communities to have their voice heard," he said.

“These two are my homelands, I must support and protect them ... Every day we hear news about people dying, and it is stressful.

"We want the international community, including Australia ... to hear the voice and do something and help us out, at least in a diplomatic arena, to understand what it is we are suffering.” 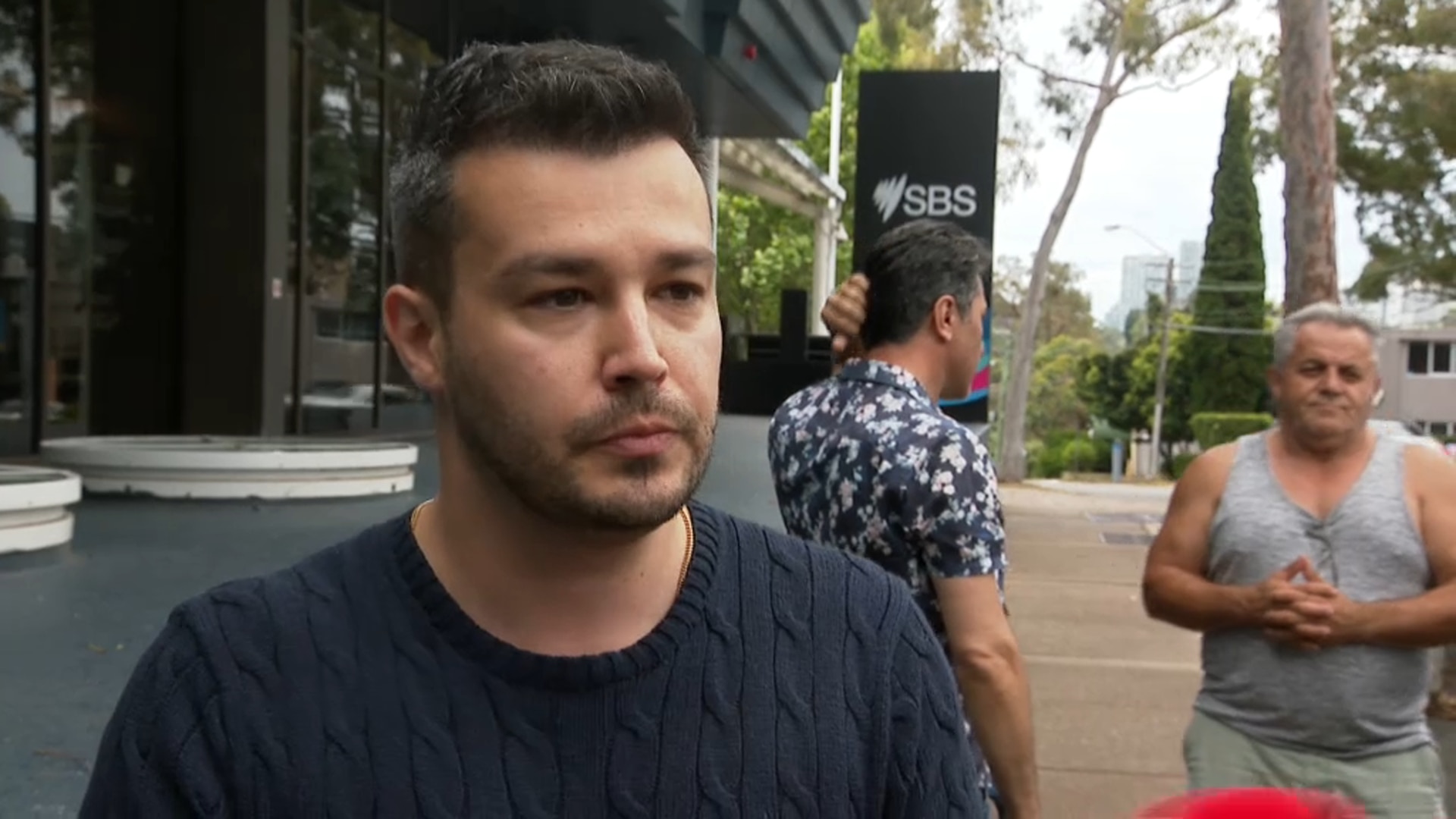 Nazami Jafarob, whose family is in Azerbaijan, says he worries for their safety.
SBS/Lucy Murray

Nasib Mukhtaorv, an Azerbaijani who has been living in Australia for seven years, said concerns for his family back home are getting “higher and higher”.

He said he wants to raise awareness of the situation in Australia.

“It’s very important for our community because we want to show our presence. We want to raise our voice because this is our motherland," he said.

"I still hope that Azerbaijani lands will be liberated, I hope peacefully, I hope there will be no more war, but if we have to, we have to fight back unfortunately." Nasib Mukhtaorv said his "concerns are getting higher and higher" for the situation in Azerbaijan.
SBS/Lucy Murray

The mountainous western region of Azerbaijan has remained under separatist Armenian control since a 1994 ceasefire ended a brutal war that killed tens of thousands.

Renewed fighting in Nagorno-Karabakh have left tens of thousands of families displaced and hundreds of people dead, with each side voicing accusations of genocide, war crimes and civilians being targeted deliberately.

The foreign ministries of Armenia and Azerbaijan agreed to two Russian-brokered ceasefires earlier in the month.

On Friday, US Secretary of State Mike Pompeo met separately with both foreign ministers in a new attempt to resolve the conflict.

US President Donald Trump said "good progress" was being made on the issue but did not elaborate and declined to say if he had spoken with the leaders of either country. Secretary of State Mike Pompeo walks out to face reporters with Azerbaijan Foreign Minister Jeyhun Bayramov, prior to holding talks, 23 October 2020 at the State Department in Washington.
Pool Reuters

"We have been assessing the way in which we can immediately, without delay, achieve the establishment of a ceasefire and go back to the peaceful resolution. I think what we've been hearing from the United States was very encouraging," he said.

During separate meetings with Armenian Foreign Minister @ZMnatsakanyan and Azerbaijani Foreign Minister @bayramov_jeyhun, we discussed critical steps to halt the violence in the Nagorno-Karabakh conflict. Both must implement a ceasefire and return to substantive negotiations.

He said the current discussion among the co-chairs of the Minsk Group, formed to mediate the conflict and led by France, Russia and the United States, was focused on the parameters of that ceasefire and how to sustain it.

World powers want to prevent a wider war that draws in Turkey, which has voiced strong support for Azerbaijan, and Russia, which has a defence pact with Armenia.