Schools and restaurants closed down, church services called off, dwindling groceries and road-blocks in place: this is the new reality in northern Italy as the number of coronavirus cases in the region skyrocket.

Australians living and working in northern Italy, where a sudden coronavirus outbreak has forced some cities into lockdown, say their lives are on hold.

More than 400 coronavirus cases have been detected in the country, most of them in the northern Lombardy and Veneto regions, and 12 people have died.

The unexpected outbreak means the coastal European nation had the third-highest number of coronavirus cases in the world on Wednesday, after South Korea and China.

Authorities have so far put at least 11 towns in complete lockdown and children across the region have been sent home from school. In Lombardy’s capital Milan, a number of high profile events, including fashion shows and football games, have been disrupted and residents have been urged to remain indoors as much as possible.

But even as the Australian government raised their travel advice for northern Italy, urging visitors to “exercise a high degree of caution” due to the outbreak, Australian expats in the hardest-hit region say they’re not making plans to leave. “We didn’t really know how serious it was until Monday, when we were also informed that work wasn’t going to be possible and to stay indoors,” former Melbourne resident Bianca Lentini told SBS News from her apartment in central Milan.

Ms Lentini, 30, is one of many teachers currently unable to go to work due to a week-long school shutdown. She said she was aware the closure could be extended into next week and even possibly into March.

“There is a quietness in the city, Chinese restaurants, museums, cinemas, galleries, everything is closed at the moment,” she said, months after she moved to the city in September.

“It is a little nerve-wracking, the uncertainty over how bad the situation is now - is it going to escalate? We are in a moment of suspense at this point in time, just taking it day by day.” Empty shelves in a supermarket in Milan.
SBS Italian

At midday on Wednesday, local time, Italian officials reported that 90 new cases had been identified in the last 24 hours.

The outbreak, which is the largest in Europe, is believed to have begun in the small town of Codogno, about 70 kilometres southeast of Milan.

Authorities were first alerted to the potential outbreak on Friday when a 38-year-old man tested positive in the town after playing football, socialising with friends and running a half-marathon.

In the following days, a “red zone” was established throughout the Lombardy region, and neighbouring Veneto, which includes the tourist hotspot of Venice, in the hopes of containing the virus. 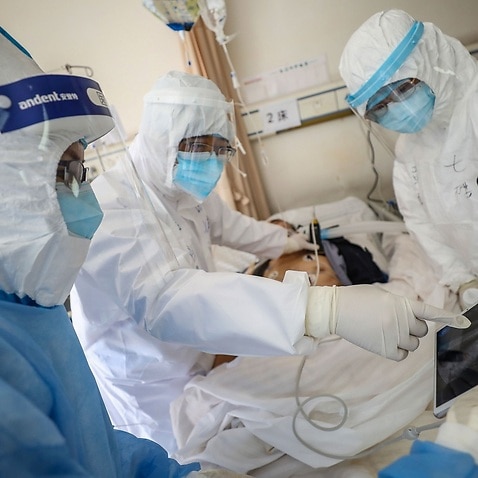 Residents within the identified area are being prevented from travelling outside the zone, with roadblocks in place on the outskirts of the towns.

Despite informing the Australian consulate in Italy that she was living and working in Milan, Ms Lentini said she was yet to receive any consular advice about the outbreak.

Another former Melbourne resident and teacher, 23-year-old Nicolas Musto, told SBS News he had considered travelling back to Australia to see his family while his work was shut down due to the outbreak, but was concerned about how he would be treated. Mr Musto is awaiting news of when schools will reopen in northern Italy, so he can return to work.

“I feel like a warm welcome wouldn’t really be waiting for me at the customs area,” he said.

The Australian government has previously instituted a blanket ban on non-citizens and permanent residents trying to enter the country from China, where the virus originated, while citizens who returned home from the virus epicentre were forced into a 14-day quarantine on Christmas Island or outside Darwin.

Mr Musto, who moved to Italy a year ago to work as an assistant English teacher, is currently living in a small town called Capriolo in the province of Brescia - about 90 minute's drive from locked-down Codogno.

“I’m pretty sure the entire northern Italy has been affected,” he said. 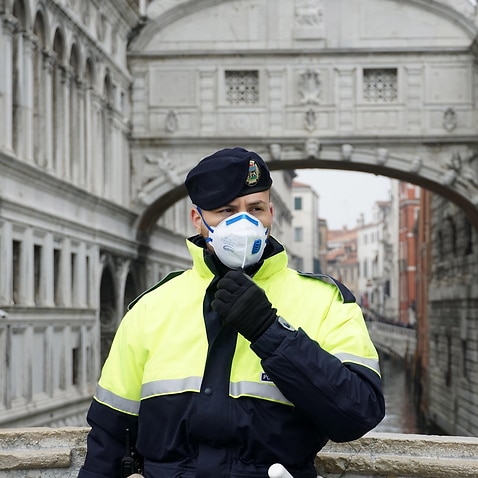 “I went to the shops yesterday … and there were some entire shelves just emptied of milk or bread or pasta or whatever it may be. It feels like it’s a bit of an apocalypse era.”

He also suspects the school closures will continue beyond Monday. While he’s scheduled to start teaching at a new school next week, he said he’s prepared for a change in plans.

“They’ve given me my timetable and everything as if it were going to go ahead, but we’re really waiting for the government to make a decision on whether they are going to open up the schools on Monday,” he said.

Universities in Milan have also been shut down, leaving Australian exchange student Imogen Reed wondering when she will be able to resume her interior design studies at the Nuova Accademia di Belle Arti. 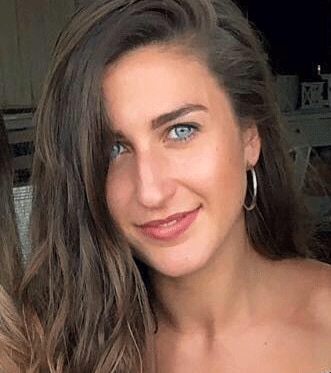 Imogen Reed is currently on exchange in Milan. She says the recent spike in cases is "concerning".
Supplied

“It crept up on us in a very dramatic way. It’s definitely a little bit disconcerting, it’s hard to completely ignore it,” the 29-year-old from Sydney told SBS News.

“I’m going a little bit stir crazy, I’ve put myself on house arrest and no one is that inclined to be going out.”

Ms Reed’s brother was planning to travel from Australia to visit her at the halfway point of her exchange next week, she said, but now it's unclear whether that will go ahead.

As of Wednesday night, European leaders had not announced any plans to close Italy’s borders with France, Switzerland, Austria and Slovenia. 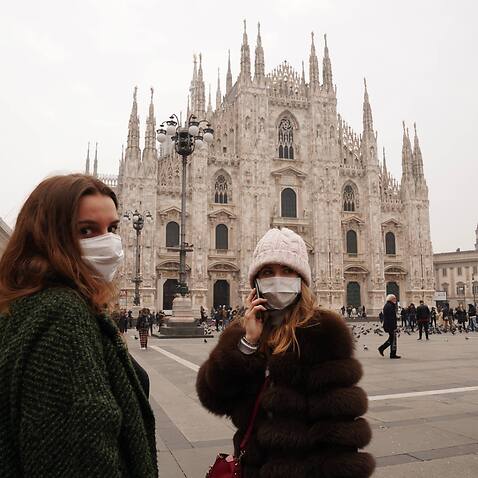 "This is a situation of concern but we must not give in to panic," European Union Health Commissioner Stella Kyriakides told reporters in Rome after meeting Italian Health Minister Roberto Speranza.

"In the EU we are still in a containment phase, it is important to underline this."

So far, all of those who have died in Italy were either elderly or had pre-existing medical conditions.

“The supermarkets have been completely ravaged, it is a bit of pandemonium,” Ms Reed added, explaining how her housemate had urged her to stock up on groceries while she had the chance.

“And I did … but there is a part of me that questions if it’s just hysteria or is doomsday at our door.” 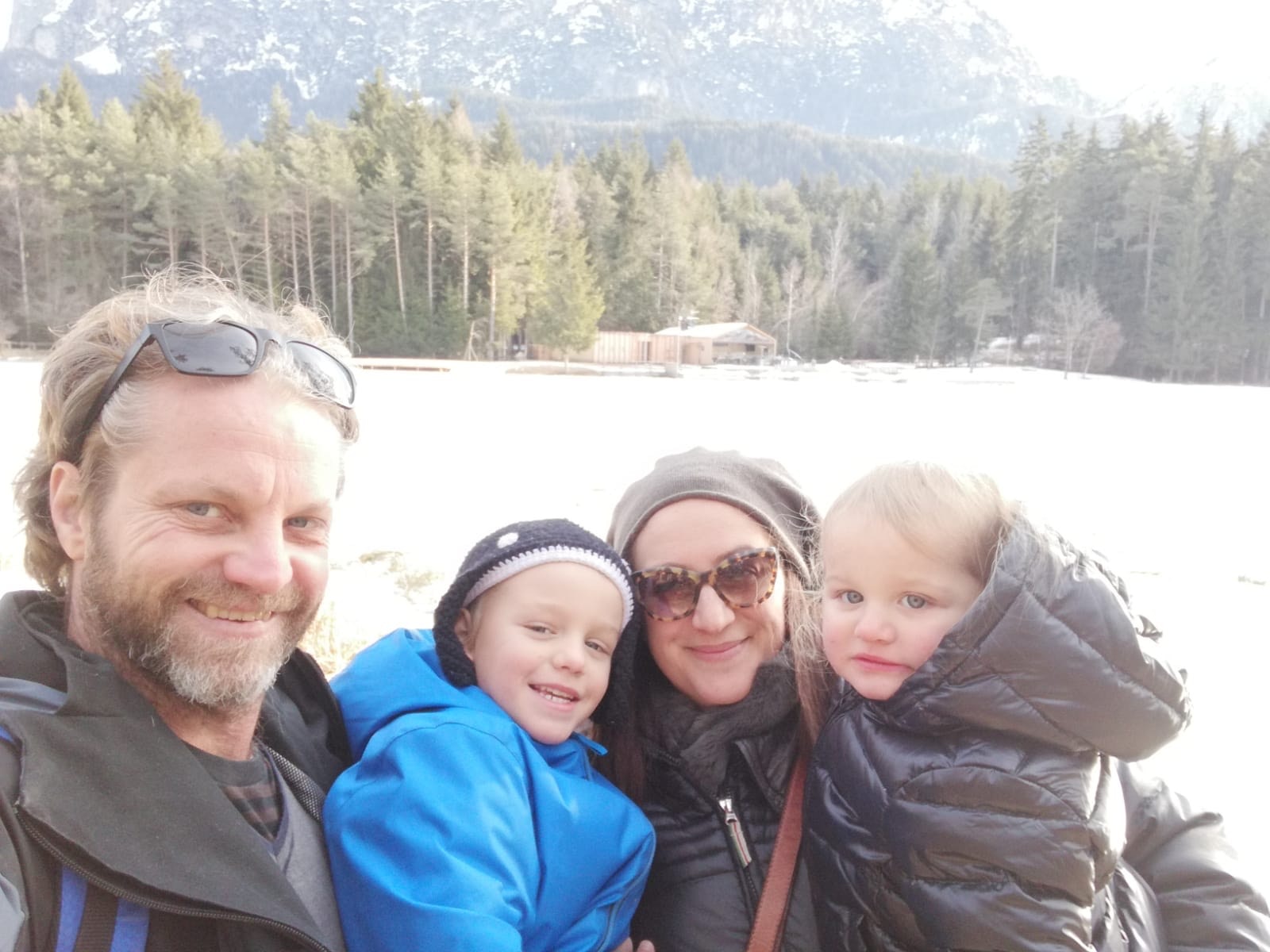 Jeremy Smith and his family are currently trying to remain inside their Milan home while the outbreak continues.
Supplied

“It’s not as though it’s a complete shutdown,” he said. Mr Smith is currently working from home while his son, aged five, and daughter, aged two, are unable to go to school.

“It’s hard to get the right advice on how the virus actually affects you, but as long as you’re healthy and fit, I’m not particularly worried.”

Mr Smith, who is a dual Australian-British citizen, said he believes it’s “too late” to flee the outbreak.

“I’m not sure what you can do anymore, it seems to be worldwide,” he said. “I think it’s out there now, I’m not sure where you can trace the origins of new cases. I’m not sure there’s anything we can really do.”

The Department of Foreign Affairs and Trade did not respond to questions on how many Australians were currently in the affected region, but said they stand ready to offer consular assistance to any Australian citizen, should they request it.

Worldwide, more than 80,000 are believed to have contracted the virus, which originated in the central Chinese city of Wuhan late last year, while more than 2,700 people have died.

For the first time since the start of the outbreak, World Health Organization chief Tedros Adhanom Ghebreyesus said on Wednesday that the number of cases being reported daily outside China had surpassed those in the origin country.