Brittany Higgins says she is honoured to accept the new role and hopes to drive "meaningful change in Parliament House". 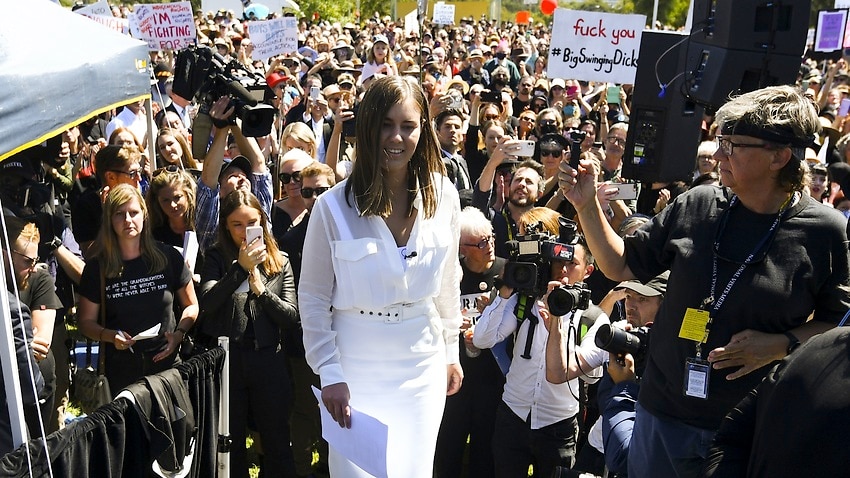 Brittany Higgins at the Women's March 4 Justice in Canberra on 15 March 2021. Source: AAP

Women's safety advocate Brittany Higgins has been appointed to a new role working to progress reform of the workplace culture at Parliament House.

Ms Higgins has been named the inaugural visiting fellow at the Global Institute for Women’s Leadership, founded and led by former prime minister Julia Gillard in 2018.

Ms Higgins will be based at the Australian National University in Canberra.

The former Liberal staffer went public with allegations in February this year she had been sexually assaulted at Parliament House by a colleague in 2019 when they were working for then-defence industry minister Linda Reynolds.

Read More
What did Australia's women's safety summit achieve and what needs to happen now?

The accused man has since appeared in court and pleaded not guilty to sexually assaulting Ms Higgins.

The revelations sparked further debate about the workplace culture and treatment towards women in Parliament House.

Ms Higgins said she hopes to deliver "meaningful change" in the new role.

"Now more than ever in the midst of growing inequality as a result of COVID-19, it’s important to ensure words are translated into action," she said in a statement.

“I am committed to ensuring that we are able to harness the momentum kickstarted this year to enact real change for Australian women so they can be better served by our major institutions.”

Ms Gillard said the advocacy of Ms Higgins has already resulted in a major shift in the attitudes towards women in politics.

"In Brittany, Australia has an incredible leader who is already having a profound impact," Ms Gillard said.

Ms Higgins is also expected to collaborate with the government and policymakers to ensure best practice models are adopted as the Independent Inquiry into the Commonwealth's Parliamentary Workplace, led by former sex discrimination commissioner Kate Jenkins, is released in November.

She is also set to work on the implementation of the landmark Respect@Work report and promote the importance of young women's leadership.

"Sexual harassment, sexual assault, inequality, abuse: these are issues women have been confronting in the workplace and society for too long," Professor Ryan said.

"But Brittany is a voice for change who will not only help advance the case for reform in Australia but who will inspire a new generation of women to keep demanding nothing less than what they are allowed: respect."