A Muslim lawyer who wears a headscarf has put aside her aspiration to become a public prosecutor.

A Sikh teacher with a turban moved about 2,800 miles from Quebec to Vancouver, calling herself a “refugee in her own country.”

And an Orthodox Jewish teacher who wears a head kerchief is worried that she could be blocked from a promotion.

Since the Quebec government in June banned schoolteachers, police officers, prosecutors and other public sector employees from wearing religious symbols while at work, people like these three women have been grappling with the consequences.

François Legault, the right-leaning Quebec premier, says the law — which applies to Muslim headscarves, Sikh turbans, Jewish skullcaps, Catholic crosses and other religious symbols — upholds the separation between religion and state, and maintains the neutrality of public sector workers. The government has stressed that the vast majority of Quebecers support the ban.

“I would not feel comfortable being faced with a judge or lawyer in court wearing a headscarf here, because I would worry about their neutrality,” said Radhia Ben Amor, a research coordinator at the University of Montreal, who is Muslim and said she moved from Tunisia to live in a more secular country.

But the law has prompted vocal protests and legal challenges, as well as condemnation by Prime Minister Justin Trudeau.

Critics say it flouts freedom of religion, breaches constitutional protections and excludes minorities who choose to wear symbols of faith from vital professions. They also say implementing the law will be fraught because it can be hard to discern a religious symbol from a fashion accessory or nonreligious garb.

The English Montreal School Board said the law was forcing it to turn away qualified teachers. It said at least one teacher had removed her headscarf while at work to keep her job.

The Coalition Inclusion Québec — a group that includes Roman Catholics, Jews, Sikhs and Muslims — is challenging the law in court, along with three teachers, including two Muslims and a Roman Catholic.

Perri Ravon, a lawyer who has worked on two of the lawsuits against the ban, said that at least for now, “the law is disproportionately affecting Muslim women because the hijab is an outwardly visible religious symbol.” She noted that a Catholic cross was less conspicuous since it could be concealed in a blouse or a shirt while at work.

Nonetheless, the Catholic teacher named in one of the suits, Andréa Lauzon, who wears a visible cross and medallion of the Virgin Mary, said in court papers that her faith and identity were inextricably bound, and that her constitutional right to freedom of religion was being breached.

The ban has its roots in Quebec’s historic evolution into an abidingly secular society with a visceral distrust of religion, stemming from the Quiet Revolution in the 1960s, when Quebecers revolted against dominance of the Roman Catholic Church.

Here are four women whose lives and careers have been affected by the ban. Nour Farhat, who represents a teachers union that is suing the Quebec government over its ban on religious symbols, at a law firm's offices.
New York Times

Farhat, 28, long dreamed about becoming a Quebec public prosecutor. Instead, she now represents a teachers union that is suing the Quebec government over the ban.

During an internship for a Quebec government agency, Farhat appeared before a judge in her headscarf, she said, making her a novelty in the courthouse.

She said that although some judges had been startled to see a female lawyer with a headscarf, some defendants from minority backgrounds cheered.

They said, ‘We’re so happy to see someone like you in a courthouse’ even after I reminded them that I was prosecuting them.

But the ban came into effect a few weeks after she finished her master’s degree in criminal law. “My dreams are destroyed,” she said. She now works in a private law firm.

Farhat argued that the law was inconsistent.

“Why is it OK for a man with a beard or a woman wearing a cross under her turtleneck to work as a state prosecutor but it’s not OK for a woman to wear a hijab?” she asked.

While some supporters say the law will help liberate Muslim women from a garment they call sexist and restrictive, Farhat said her headscarf empowers her. Farhat’s parents emigrated to Montreal from Lebanon in the 1990s. At age 11, she decided to put on a headscarf. “My dad always said ‘My daughter is worth 1,000 men,’” she recalled. Amrit Kaur, a young teacher who is Sikh and left Quebec for a position in British Columbia so that she would not be forced to remove her turban when teaching.
New York Times

The ban on religious symbols passed the day that Kaur, a 29-year-old Sikh who wears a turban, graduated from teachers college. So she moved to the other side of the country.

And how, she asked, was she supposed to teach children about tolerance and diversity when she herself was prohibited from wearing a symbol of her own religious faith while at work? Although Sikh men have traditionally worn the turban, some Sikh women in the diaspora like Kaur have adopted the custom, to claim their faith and equality. Sikh activists in Quebec said few if any Sikh men were affected by the ban because within the fairly small Sikh community in the province, men historically have not applied for public sector jobs like policing, fearing prejudice against the turban.

Even before the law passed, the Quebec government had banned several Sikhs from entering the Quebec Legislature with small ceremonial daggers, or kirpans, under their clothing. The ban survived an appeal at Canada’s Supreme Court.

Amrit Kaur recalled that her father, a Pink Floyd-loving aeronautical engineer, had suffered taunts of “Paki, go home!” while growing up in England and had settled in Montreal because of its tolerance.

Now, she is so homesick for Quebec that she set her computer, car and iPhone language settings to French.

She said the suggestion by supporters of the bill that her turban would make her indoctrinate children was misguided.

It is the state that is imposing secularism as a religion on me. Carolyn Gehr, an Orthodox Jew who wears a tichel to symbolise her marital commitment under Jewish law in the high school where she has taught for 14 years.
New York Times

Parents at the high school where Gehr teaches laud her as a role model for young women. She presides over chemistry and geology laboratory sessions and advises a feminist student group on issues like abortion and date rape.

But Gehr, a 37-year-old Orthodox Jew with 14 years of experience at her school, fears she could be blocked if she wanted to be promoted to vice principal. Officials at the school board said the law might apply to her head kerchief.

“The idea that I should be punished because of what is on my head is offensive,” said Gehr, who said she wore the head covering to symbolise her marital commitment under Jewish law.

Gehr said the law forced teachers to explain to religious children that their career choices could be limited.

“How is a teacher supposed to tell a student to curtail their dreams?” she asked. 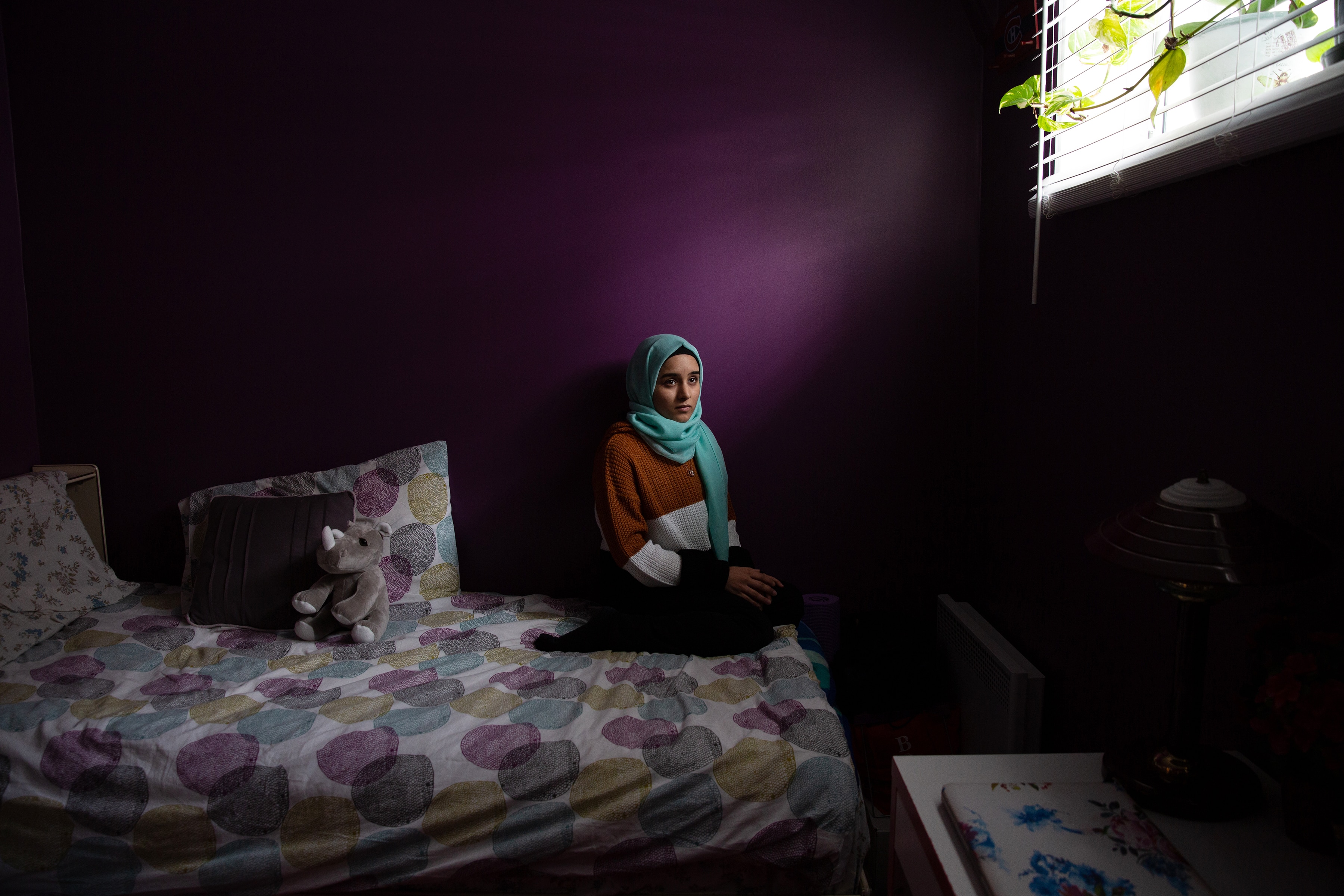 Sumayya Patel, who wears a hijab and had only recently earned her degree in education when Quebec's new secularism law began.
New York Times

After the ban passed, Patel, 24, asked herself whether she could remove her headscarf.

“There are times when I want to take it off and let my hair down like other girls,” she said. “But I have stuck with it since I am 13 years old, and, after all that effort and sacrifice, it has become a part of me.”

Patel said that just a few months after she graduated from McGill University in Montreal with a degree in education, and had been offered a job as a substitute teacher, her life was upended when the school board told her that to continue to work, she would need to remove her hijab.

Eventually, the board let her keep her job because she was hired before the law came into force. However, her future is uncertain.

Patel said the law promoted hatred. Some feminists in Quebec support the ban, arguing that keeping religion out of public life can help further women’s rights.

But Patel said those who wanted to restrict her from wearing her hijab were being sexist. Her Gujarat-born parents had always encouraged her to have a career.

“Feminism is having the choice to do what you want to do,” she said.