“Where there is Indigenous land,” newly elected President Jair Bolsonaro has said, “there is wealth underneath it.” Now a battle rages between the Indigenous tribes that still call the Amazon home - and those who want to develop it.

The miners had to go.

Their bulldozers, dredges and high-pressure hoses tore into miles of land along the river, polluting the water, poisoning the fish and threatening the way life had been lived in this stretch of the Amazon for thousands of years.

So one morning in March, leaders of the Munduruku tribe readied their bows and arrows, stashed a bit of food into plastic bags and crammed inside four boats to drive the miners away.

“It has been decided,” said Maria Leusa Kabá, one of the women in the tribe who helped lead the revolt.

The confrontation had begun.

The showdown was a small part of an existential struggle Indigenous communities are waging across Brazil. But the battle goes far beyond their individual survival, striking at the fate of the Amazon and its pivotal role in climate change.

In recent years, the Brazilian government has sharply cut spending on Indigenous communities, while lawmakers have pushed for regulatory changes championed by industries seeking unfettered access to parts of the Amazon that have been protected under the nation’s constitution.

Now, Brazil has elected a new far-right president, Jair Bolsonaro, who favours abolishing protected Indigenous lands. He has promised to scale back enforcement of environmental laws, calling them an impediment to economic growth, and has made his intentions for the Amazon clear.

“Where there is Indigenous land,” he said last year, “there is wealth underneath it.” Long before Bolsonaro’s victory, descendants of the original inhabitants of the Amazon, the world’s largest tropical rain forest, had become increasingly vulnerable to bands of miners, loggers and farmers who have been clearing it at a rate environmentalists call unsustainable.

From 2006 through 2017, Brazil’s part of the Amazon lost roughly 91,890 square miles of forest cover — an area larger than New York, Vermont, New Hampshire, New Jersey and Connecticut combined, according to an analysis of satellite images by Global Forest Watch.

Thousands of square miles of forest have been razed in Indigenous territories, where large-scale industrial activity is prohibited. With Bolsonaro’s victory, Indigenous leaders are sounding more drastic warnings.

“He represents an institutionalization of genocide in Brazil,” said Dinamã Tuxá, coordinator of Brazil’s Association of Indigenous Peoples. A spokesman for Bolsonaro’s transition team said no one would comment on Indigenous concerns, or respond to criticism of his views, because officials were focused on “far more important issues.”

Experts say the rate of deforestation in the Amazon, which soaks up enormous amount of the world’s carbon dioxide, makes it nearly certain that Brazil will miss some of the climate change mitigation goals it set in 2009, when it presented itself as an exemplar of sustainable development at a U.N. summit.

The trendline has led federal prosecutors and environmentalists to say that the Amazon is on the brink of irreversible damage, potentially leading to the extinction of Indigenous communities that have weathered centuries of calamities.

“The combined impacts of deforestation, climate change and extensive use of fire have brought the Amazon to the tipping point,” said Thomas Lovejoy, an environmental science and policy professor at George Mason University. “The Indigenous people, who are the best defenders of the land, become vulnerable if the forest vanishes.” Members of the indigenous Munduruku tribe perform a traditional ceremonial dance at the start of a rare three-day assembly of Munduruku.
NYTNS

After Brazil’s economy plunged into recession in 2014, politicians and industry leaders who favour loosening environmental protections gained the upper hand in a long-running contest over the rain forest.

They have had some success in weakening protections enshrined in Brazil’s 1988 Constitution. But in many instances, the legal battle lags far behind reality.

“They haven’t given up on changing the law, but they are prioritizing a strategy of creating facts on the ground,” said Cleber Buzzatto, executive secretary of the Indigenous Missionary Council, an Indigenous rights group. “By creating an irreversible reality, they will then seek to change legislation.”

Few areas are as striking as the gold mine built around Posto de Vigilância, or Lookout Point, one of the most remote Munduruku villages.

Osvaldo Waru Munduruku, the village chief, explained how his tiny hamlet, home to about 15 families, became a hub of the illegal mining trade.

The National Indian Foundation, a federal agency that helps Indigenous people, had its aid budget slashed in recent years, making it hard for remote villages to get food or basic services. Beyond that, many Indigenous leaders like Waru long for much better living standards, education and opportunities than an isolated, arduous forest existence allows.

So when the first “white miners,” as he calls them, dropped by in 2015 to suggest a partnership, Waru was tempted.

The miners rewarded him with 10 percent of the haul each month — worth a few hundred dollars, he said.

“We would save it and save it until there was enough to buy things for the community,” Waru said. It paid for a new boat motor, a generator and a radio.

But then the bouts of diarrhoea among children began. Erosion from the mines turned the river a sandy brown. Fish that had long been a staple of the community’s diet now had high levels of mercury, which is used to extract gold.

Along the Tapajos River, the Munduruku, nearly 14,000 members strong, have splintered into dozens of small villages, scattered across a territory slightly larger than New Hampshire. Illegal miners at a gold mine built around Posto de Vigilncia, or Lookout Point, one of the Munduruku tribes most remote villages in the Amazon rainforest.
NYTNS

‘This Territory Is Not Yours’

Weapons in hand, about 30 members of the tribe set out to evict the miners.

But after trudging for more than six hours through rivers, mud and steep hills, they reached the first gold mining camp exhausted, hungry and thirsty.

Amarildo Dias Nascimento, the camp supervisor, sensed that a confrontation was imminent. So, in a disarming gesture, he welcomed the Munduruku delegation effusively, instructing his cooks to put on a feast.

Nascimento, 47, argued that the miners were merely trying to survive.

“Many have been left without options,” he said, pointing at his men. “Do you become a thief in Rio de Janeiro? Many are here because they don’t want to resort to that. We’re here fighting for our daily bread.”

The next morning, Kabá breast-fed her baby as she summoned the miners for the showdown.

“This is our land,” she said. “This territory is not yours. This is where we get sustenance for our children. We don’t depend on gold, but rather the fruits and animals you are driving away.”

“The moment you ask us to leave, we will do it immediately,” he said.

But it was still unsettled when, or even if, the miners would leave. 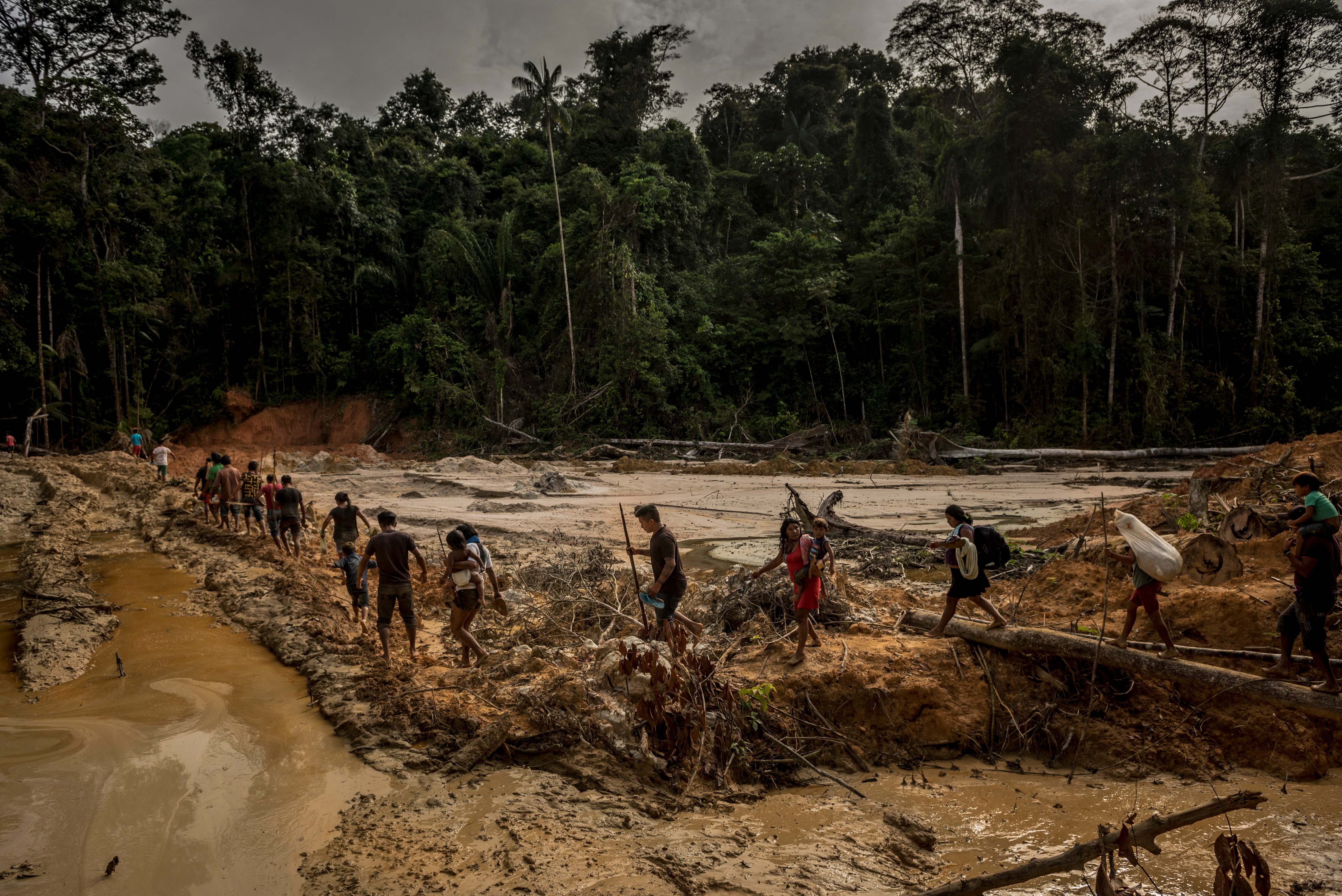 Members of the indigenous Munduruku tribe cross protected land in Brazil that was destroyed by illegal gold mining.
NYTNS

While Brazilian lawmakers press to expand mining, logging and farming in the Amazon, some prosecutors and officials remain steadfastly against it, using their authority to enforce environmental laws for as long as they exist.

But the raids do little. As usual, miners scattered into the forest as the aircraft approached, preventing investigators from making arrests or even asking many questions. Agents set fire to several machines and camp dwellings before taking off.

Days later, federal prosecutors searched gold dealers in the nearest major urban areas — the second phase of the investigation. This one was called Midas Dilemma, a play on the tale of King Midas and his dangerous ability to turn everything he touched into gold.

“We see a parallel with the exploitation of national riches,” said Gecivaldo Vasconcelos Ferreira, a federal police officer who helped lead the investigation. “If they aren’t exploited in a responsible way, they end up becoming a curse.”

Luis Camões Boaventura, a prosecutor on the case, says authorities have only scratched the surface of an enormous industry backed by local and national politicians.

There are hundreds, if not thousands, of gold mines along the Tapajós, and supply chains are deliberately opaque, making it hard to go after illegal mining bosses, he said.

“It is a very serious problem,” he said.