JN Joniad is a Rohingya refugee living in Indonesia after attempting to flee Myanmar for Australia in 2013. He is now witnessing Indonesia's large refugee and asylum seeker population battle with the coronavirus pandemic.

For thousands of refugees and asylum seekers in Indonesia, it is impossible to keep any social distance.

There are over 14,000 refugees and asylum seekers living in limbo in Indonesia, with thousands having fled their country to seek refuge in Australia, only to be stranded there in transit. They are now at a greater risk of contracting COVID-19.

In Jakarta, many refugees and asylum seekers share rooms and cramped apartments. Those in International Organisation for Migration (IOM) accommodation and camps live in overcrowded conditions.

It is almost impossible for them to practice social distancing. With no basic rights to work, travel and use public health services, refugees and asylum seekers are further marginalised and the most vulnerable to the spread of coronavirus.

Homaira Zamiri, a 20-year-old Hazara refugee who has been living in Jakarta since 2015, said, “We have no confirmed case of Covid-19 [in our accommodation] as yet, but the UNHCR seems not to have prepared anything for us.

“Our representative had a meeting with  Church World Service (CWS). They told him that government hospitals are for Indonesians and international citizens who have passports: this does not include refugees. If conditions really get worse as in Italy, I don’t think the government will pay any attention to us.”

Refugees and asylum seekers are already suffering from a lack of adequate health care facilities in Indonesia. Without legal status, they are in a vulnerable position.

They are unable to go to hospital, have access to other public healthcare services, and they cannot afford medication. Those under IOM receive minimum healthcare, but it is limited to emergencies. In Jakarta, CWS provides medical help to a few in emergency conditions, limited to refugees and asylum seekers who are not under IOM. The majority are left with no help from any organisation. Some refugees in West Jakarta's Kalideres camps shelter in tents inside a building provided by the government. Pictured March 15.
JN Jonaid

“If a refugee is sick, they don’t get help from UNHCR or CWS unless it is a serious case, like when you are about to die,” Homaira said.

“That is the stage when UNHCR and CWS want to send you to the hospital. I have witnessed a refugee named Abdullah die at the hospital, because he could not afford the medication and other NGOs rejected him because the medication was expensive.”

Communicable diseases are the most significant morbidities among refugees and asylum seekers due to unavailability of health services. Furthermore, they often have psychological health problems due to violence, displacement and other traumatic experiences back in their home countries.

To get medication, refugees under IOM have to write letters to their offices, which are collected once a week. This process can take up to two weeks or longer and some are rejected. The accepted cases receive recommendation for hospitals, sometimes after their conditions have already declined. JN Jonaid is a Rohingya asylum seeker reporting on the coronavirus outbreak in Indonesia.
Supplied

Erfan Dana, a 25-year-old refugee and Afghan community leader in Batam, said, “I know of many elderly refugees with respiratory problems, they didn’t receive good treatment before the outbreak of the virus.

“Now with the massive outbreak of the virus in Indonesia they are at great risk of being infected with coronavirus.

“As the rate of people infected with coronavirus is very high in Indonesia, I don’t think the refugees would receive the care they need, there are no available coronavirus tests from the government for the refugees.”

In Kalideres, west of Jakarta, the government has arranged for 250 homeless refugees and asylum seekers to be sheltered in a single, crowded building which has no privacy for women and children. They all sleep in tents and on the floors. They cannot use the IOM’s facilities and a church provides two meals per week; the refugees and asylum seekers rely on the generosity of the local population on the other days. 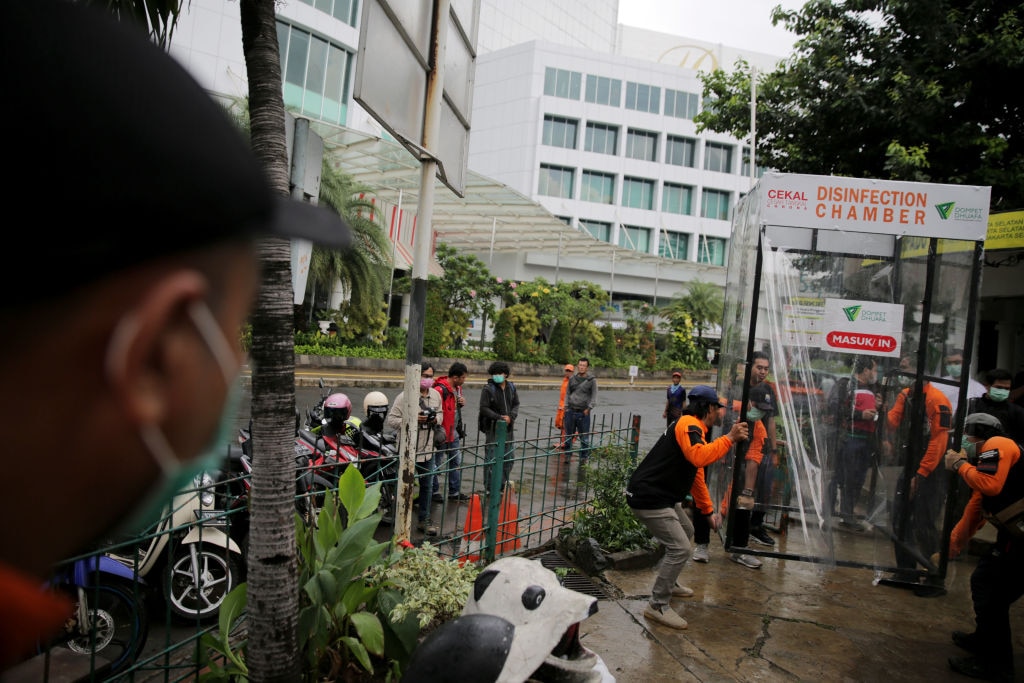 Bystanders watch as a woman is sprayed with disinfectant inside a makeshift sterilisation chamber during the coronavirus outbreak in Jakarta.
Getty Images

“Refugees in Indonesia are in a complete state of stress and worry. They live in dire conditions, have very little money, receive no medical treatment, and sleep in unsanitary and overcrowded places,” Efran said.

“Should one person become infected with this virus, the virus will spread to everyone in the community. Refugees cannot afford to stock up on food and essential supplies, and they don’t have the budget to buy antiseptic liquid to disinfect the community toilets, surfaces and surroundings.”

'The only medicines we have are ginger and garlic'

Jakarta is the most infected city in Indonesia, and is where 7,000 refugees and asylum seekers are currently living, in vulnerable situations. Hussan Ramaza, the refugee representative of the Kalideres camp, said, “We are told to keep social distance, but how can we do that when we are living so crowded in a single building with no separate rooms?

“They tell us to stay home. Where is our home? We don't have a home to stay. If someone gets infected, we are all at risk. The only medicines we have are ginger and garlic. I don't know if we will receive any other medication from the government if we fall sick.

“We have not seen anyone from UNHCR or the government coming for days.”

Dr. Antje Missbach, a senior researcher and the author of Troubled Transit said, “At the moment everything is speculation. Indonesian health system is underdeveloped and underprepared for any pandemic.

“Refugees and asylum seekers tend to be more at risk as they live in substandard conditions. Their houses tend to be crowded. Self-isolation is almost impossible. Many also need to earn money to put food on the table, therefore staying at home is not an option.”

Reyas Alam, a Rohingya refugee who has been confined in IOM accommodation for eight years in Makassar, said, “We are becoming weak due to lack of good food. Everything becomes expensive and IOM money is not enough. Normally every month, I buy ten kilo rice for one month but this month I buy extra ten kilos more to stay home.

“Now I have only rice to eat and I cannot put effort into vegetables and other stuff. In this situation, how can a refugee get more energy to protect his body from viruses with only  limited facilities and services?”

In a statement to SBS Dateline, a UNHCR Indonesia spokesperson said they are closely monitoring developments relating to COVID-19 and following the guidance of the Indonesian State administration as well as of the World Health Organisation.

They said the government has committed to refugees having access to COVID-19 related medical treatment, adding that no refugee cases have been reported so far.

“As per the government of Indonesia’s protocol, refugees have access to COVID-19 related services, including testing and treatment, provided by the Ministry of Health. Refugee communities throughout the country have already been informed of the protocol through various communication channels and actors.”

The organisation said it is engaging in outreach work so this information is communicated to refugees and asylum seekers in Indonesia, including information pamphlets in eight languages.

“These were widely distributed and displayed during information sessions with refugees, as well as at UNHCR and partners’ offices, refugee learning centres and refugee accommodation centres.

“As a matter of prevention, UNHCR Indonesia is also working closely with partners to distribute sanitation kits including masks and disinfectants to refugee communities.”