Biohackers around the world have been turning their efforts to the COVID-19 pandemic.

It’s the question plaguing scientists: how is the world going to test, treat and prevent COVID-19?

Biohackers -- also known as citizen or do-it-yourself scientists -- have been working to solve some of the greatest problems in the coronavirus era. Biohackers commonly work outside the bureaucracy of mainstream scientific institutions, share their results and advocate for equal access to scientific knowledge.

The most radical COVID-19 biohacking pursuit has been the development of a vaccine, undertaken by groups in the US.

Californian Josiah Zanyer is one of the more infamous biohackers. Early in the pandemic, he announced his intention to help develop a vaccine. Using a Harvard University paper demonstrating a DNA vaccine that appeared to trigger protective immunity against SARS-CoV-2, the virus that causes COVID-19.

Zanyer is live-streaming his experiment and has even said he may test the vaccine on himself.

“This is the perfect opportunity for biohackers,” he told Bloomberg in June. “We can move science faster.”

Biohackers, like Zanyer, have attracted criticism for being sensationalist and critics say that without regulations, the science can be dangerous.

Fans of biohacking say working outside a regulatory framework has its advantages: experiments can be more creative, discoveries could be fast-tracked, and scientific knowledge is free and public -- so it can be used anywhere around the world. Dr Andrew Lapworth from the UNSW has studied how biohackers fit into the scientific world and the "real" world. He says biohackers could serve to bridge the gap between the two spheres -- promoting transparency on how science is made and how accessible it can be.

“It’s reshaping where science happens and is a place where innovation is possible,” he told SBS Dateline.

Dr Lapworth said it is unlikely a biohacker would be successful at developing a vaccine.

“Rudimentary labs and a lack of resources mean that a biohacker would need to engage with traditional scientific institutions for that to be possible.” Meow Ludo Meow Meow is a prominent Sydney-based biohacker who runs citizen science lab, BioFoundry. He agrees that the place of biohackers in the coronavirus narrative may be better served in testing, rather than vaccine development.

“I think that something like that requires a higher level of biosecurity than most biohackers would have access to,” he told SBS Dateline.

Meow has developed his own 30-minute coronavirus test, based on a design published by scientists from the University of Pennsylvania in the US. It involves a technology called LAMP (Loop-Mediated Isothermal Amplification), which basically multiplies the virus so it can be "visualised."

“Our test works the same as a traditional lab test; it looks for the actual virus, not an antibody,” he said.

“So we look for the actual virus and we conduct a chemical reaction that if the virus is present, makes a lot of DNA. We basically take that DNA and we can visualise.”

Meow said that this technology could be used where rapid tests are needed, like airports, cruise ships, fly-in-fly-out worker.

"Basically, anywhere where you need a result on the spot."

Meow is hoping to commercialise his test. He has offered his research to numerous institutions but none of them want to take it further.

"We have such strict laws in this country because it means that any medical device that ends up on a shelf or being sold by a pharmacy has a commitment to quality," he said.

"I would love to commercialise this test in Australia but I don't see a pathway to doing that unless the coronavirus gets bad enough, that they work with us to get the test across the line."

He is open to taking his research overseas, especially in less developed countries where an easy to make testing kit could make a significant difference.

"I'll go overseas to where a country will give me the level of support I need to finish off the test."

“I think we need to embrace alternative ways of thinking and people outside traditional institutions.” 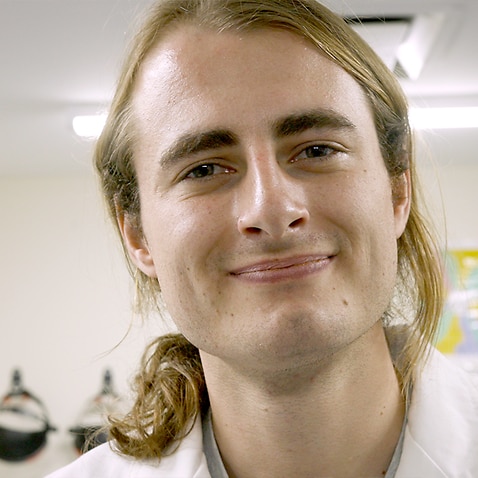 Insulin is unaffordable for millions. These ‘biology nerds’ want to fix that