Tensions between police and protesters escalate on a university campus in the middle of the city.

What does it take to stage the most coordinated mass protests in history? Watch Behind the Frontline on Dateline

Twenty-year-old Ida* was blasted by a water cannon as she escaped a university “under siege.”

Images have circulated of a police media liaison officer shot with an arrow outside the university.

Despite her minor injuries and escalating violence at Polytechnic University, Ida told Dateline, “I want to find a way back in, right now ... I have friends inside, but there is no way in and no way out.”

The escalation follows a week-long protest at the university where demonstrators blocked one of the city’s major highways, the Cross Harbour Tunnel which links Hong Kong Island to the Kowloon peninsula.

Ida has been protesting China’s influence in Hong Kong, along with as many as one million other protesters, since June. The pro-democracy movement demands independence from Beijing, along with amnesty for all participants in the protests so-far.

Ida says her perspective has shifted at the weekend . Hundreds of protesters have barricaded themselves inside the campus in the centre of Hong Kong. Police have threatened those inside with live rounds as reports claim students are hurling petrol bombs and debris at officers.

“I don’t care about long-term goals right at this moment. I am just thinking of today, I am just hoping my friends aren’t injured,” she said.

“I am just thinking that I want to be able to see them tomorrow … I’m so desperate, right now, for the people I care about.” 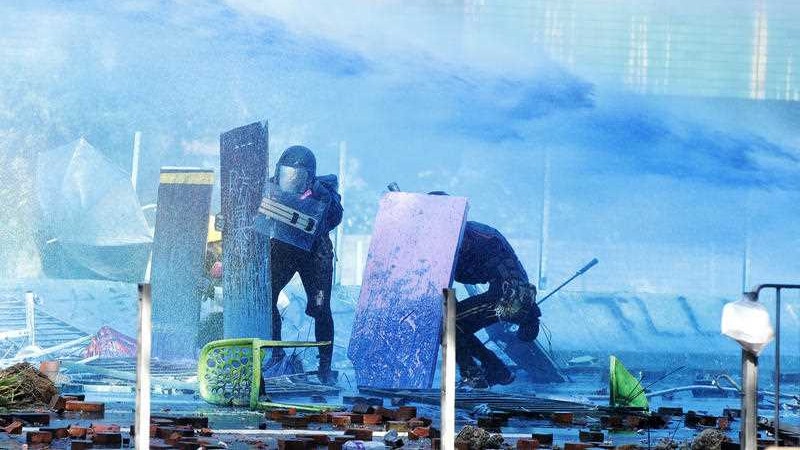 Police have declared the campus a riot scene. In Hong Kong, a rioting conviction carries a prison term of up to 10 years. Ida does not fear prison when she believes her life -- and her friends’ lives -- are on the line.

As this article was published Monday afternoon AEST, Hong Kong police have moved in on protesters barricading themselves at the university. On social media, images are circulating of the university’s entrance in flames as riot police attempt to storm the building.

Ida is not optimistic it will end well, “I guess [the protests] end when everyone who is willing to die, dies.”

What has transpired at Polytechnic University marks the most violent event in the almost six-month-long protests triggered by a now-shelved bill to allow extradition to China.

There are reports protesters who have barricaded themselves at the university have stockpiled petrol bombs, bricks and other weapons while throwing Molotov cocktails at police vehicles.

In a statement released Monday, Hong Kong police insist they are conducting dispersal and arrest operations, and refute “rumours” that police raided the premises. Instead, police say the people they describe as “rioters” are hurling “petrol bombs at police”.

“Explosives, flammable substances and dangerous goods also pose threats to anyone therein. Police appeal to everyone inside the campus to leave immediately.”

According to the President of the Student Union of the Hong Kong Polytechnic University and the Student Representative of the University Council their university is under police siege. 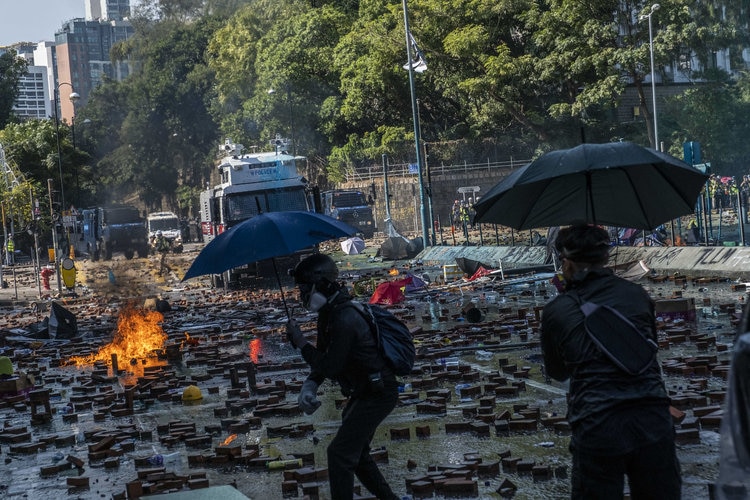 “Three persons have suffered injuries to their eyes and around 40 persons are experiencing hypothermia due to being directly hit by police water cannons,” the groups said in a statement released by pro-democracy media group Kwan Kung Temple.

I guess [the protests] end when everyone who is willing to die, dies.

“PolyU is now facing the biggest crisis since its establishment over 80 years ago. This incident is the most severe humanitarian crisis in the current democratic movement.”

Police stand accused of arresting and removing medical staff from the campus.

Kwan*, who has been on the frontlines since protests began in March, insists protesters have not become more violent, rather those in power are no longer content with just “dispersing the crowd”.

“Instead it is targeted hate and retaliation,” he told Dateline via Telegram.

“They have besieged our university now and are still sieging it, with no intention of humane treatment let alone letting anybody go.”

“They have removed first-aiders and medical personnel from [the university] and then arrested all of them...It’s a life or death, or arrest, the situation right now.”

There are fears the standoff will become a bloody showdown as both sides refuse to back down which has drawn international concern. 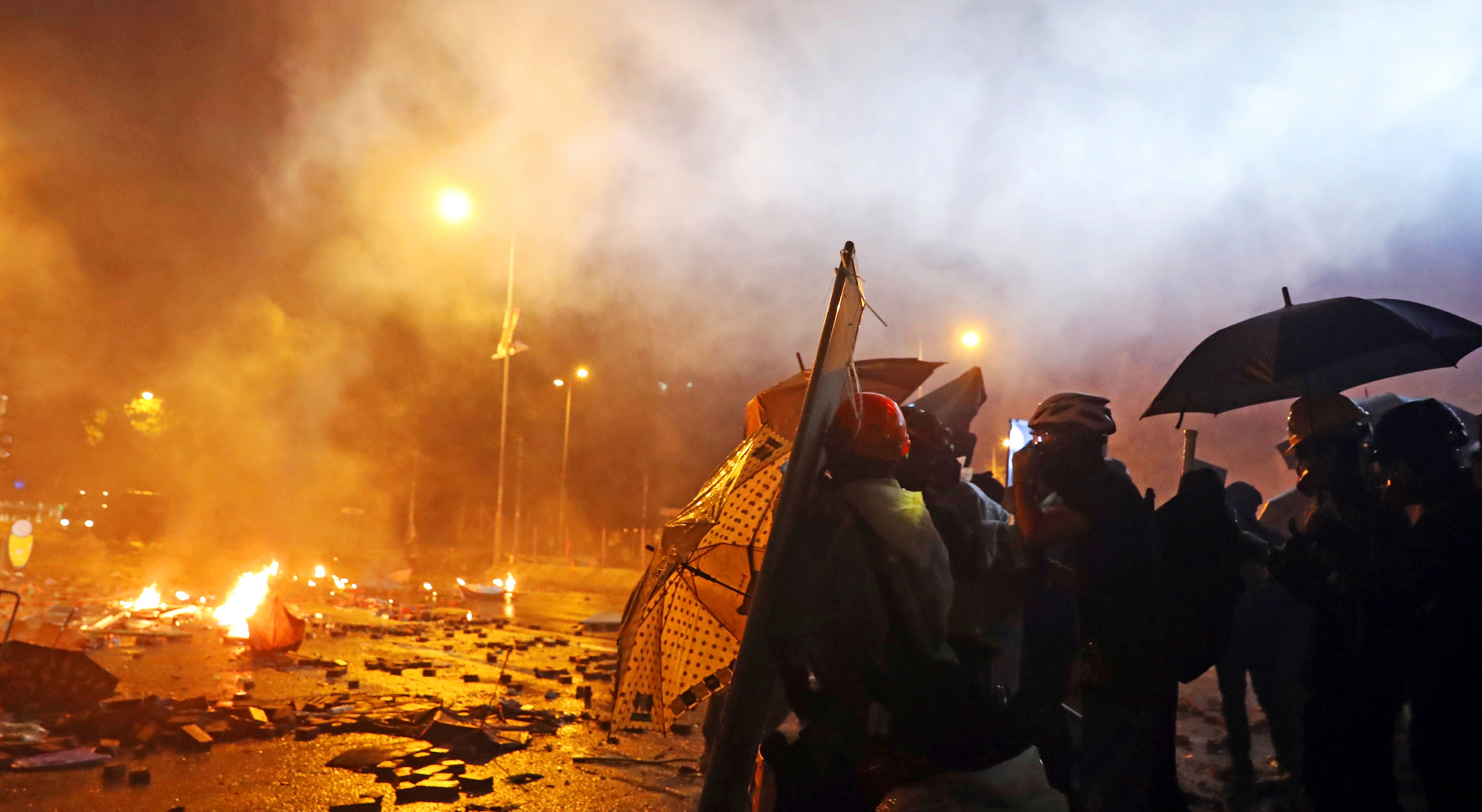 Protesters are thrown tear bombs by police officers on the street near Hong Kong Polytechnic University in Hong Kong on 17 November, 2019.
AAP

Former British foreign secretary Malcolm Rifkind said in a statement: "Hong Kong's Chief Executive has the responsibility to do everything possible to prevent a massacre. She must order the police to use restraint."

The hashtag #Tiananmen2019 is circulating online, referencing the deadly protests in China in 1989. There one question Kwan, and many other protesters, fear.

“It is a humanitarian crisis,” Kwan said.

*Names have been changed at the request of sources. 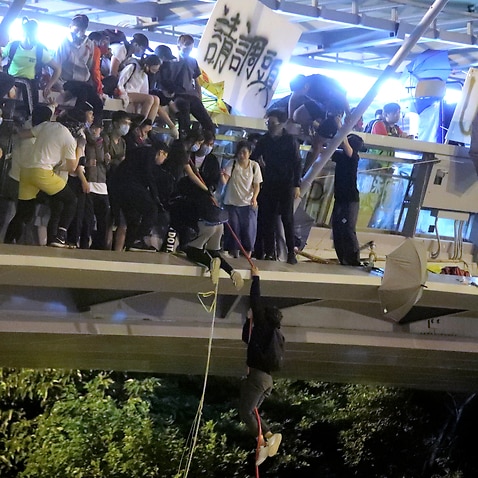