As the birthrate plummets in South Korea, rural schools are emptying. To fill its classrooms, one school opened its doors to women who have for decades dreamed of learning to read.

Above: What is the secret to living large in old age? Follow this squad of octogenerian Japanese cheerleaders here.

Every morning on her way to school, Hwang Wol-geum, a first grader, rides the same yellow bus as three of her family members: One is a kindergartner, another a third grader, and the other a fifth grader.

Hwang is 70 — and her schoolmates are her grandchildren.

Illiterate all her life, she remembers hiding behind a tree and weeping as she saw her friends trot off to school six decades ago. While other village children learned to read and write, she stayed home, tending pigs, collecting firewood and looking after younger siblings. She later raised six children of her own, sending all of them to high school or college.

Yet it always pained her that she couldn’t do what other mothers did.

“Writing letters to my children, that’s what I dreamed of the most,” Hwang said.

Help came unexpectedly this year from the local school that was running out of school-age children and was desperate to fill its classrooms.

South Korea’s birth-rate has been plummeting in recent decades, falling to less than one child per woman last year, one of the lowest in the world.

Like other rural schools, Daegu Elementary in Hwang’s district has seen its students dwindle. When Hwang’s youngest son, Chae Kyong-deok, 42, attended it in the 1980s, it had 90 students in each grade. Now, the school has only 22 students in total.

This year, the worst calamity of all struck the district.

“We went around villages looking for just one precious kid to enrol as a first grader,” said the principal Lee Ju-young. “There was none.”

So Lee and local residents, desperate to save the 96-year-old school, came up with an idea: How about enrolling older villagers who wanted to learn to read and write?

Hwang and seven other women, aged 56 to 80, stepped forward, with at least four others asking to be enrolled next year.

For younger people who want to stay in the area, the future of their town depended on keeping the school alive.

“Who would start a family here if there were no school?” asked Noh Soon-ah, 40, whose husband — one of Hwang’s sons — quit his job in an auto parts factory in a big city and resettled his family here five years ago to succeed his parents’ farming business. “Children are what brings laughter and vitality to a town.”

Like many first graders on their first day, Hwang cried. But these were tears of joy.

”I couldn’t believe this was actually happening to me,” she said. “Carrying a school bag has always been my dream.”

Once overcrowded with students, the seaside campus of Daegu Elementary looked almost empty on a recent visit. Camellia, sweet brier and pine trees surrounded its deserted sandy playground. After a rain, cherry trees were shedding their blossoms.

In the first-grade classroom, Hwang and two other grandmothers toiled laboriously, determined to learn to read and write.

Pencil in hand, they chanted the 14 consonants and 10 vowels of the Korean alphabet as their teacher, Jo Yoon-jeong, 24, wrote them one by one on the white board. They took dictation on words like “aunt,” “fisherman” and “raccoon” with their slow and crooked penmanship.

Between writing exercises, Jo turned on an upbeat song, “There Is Nothing Wrong With My Age!” and led a dance routine for the giggling grandmothers to follow.

“School is so much fun,” Hwang said.

Her son, Kyong-deok, agreed: “My mother has become a much happier person since she began going to school. Smiles hardly seem to leave her face.”

Hwang’s county, Gangjin, here on the southwestern tip of South Korea’s coast, is typical of the rural areas left behind in South Korea’s rapid industrialisation.

Park Jong-sim, 75, is a champion octopus catcher in her village. But on a recent day, she was more worried about falling behind in her elementary-school class.

She blinked her eyes as she tried to keep them focused on the notebook, and occasionally took her reading glasses off to wipe tears caused by eye fatigue. Enunciating words was also difficult. To practice her penmanship, she woke up before dawn.

“My memory, hand and tongue don’t work like I wish,” Park said. “But I am going to learn to write before I die. You don’t know how I feel when I go to a government office, they ask me to fill out a form and the only thing I know how to write is my name.”

Going to school became a distant dream for Park after her father died when she was 8. She spent her childhood collecting sea mustard, raising silkworms and harvesting ramie plants.

Decades ago, Korean families often focused what little resources they had on educating their sons. Many girls were expected to stay home and look after younger siblings while their parents worked outside.

Hwang said her father found a new wife after her mother gave birth to five daughters but no son. Her stepmother refused to send Hwang to school and scoffed at the idea of “teaching a daughter letters” when her father tried to show her how to read at home.

Being illiterate brought many humiliations later in life. Posting packages was always a problem because she could not write addresses.

Years ago, she and her husband, Chae Jan-ho, 72, were visiting their son in Seoul when they got separated in the bustling subway. Hwang could not read any of the signs and was hopelessly lost until a stranger helped her find her way.

Now she and her fellow students are determined to make up for lost time. One of the women who returned to elementary school this year had dropped out of school as a fifth grader in the 1970s, when she was sent away to become a live-in housemaid for a rich family in order to support her own. 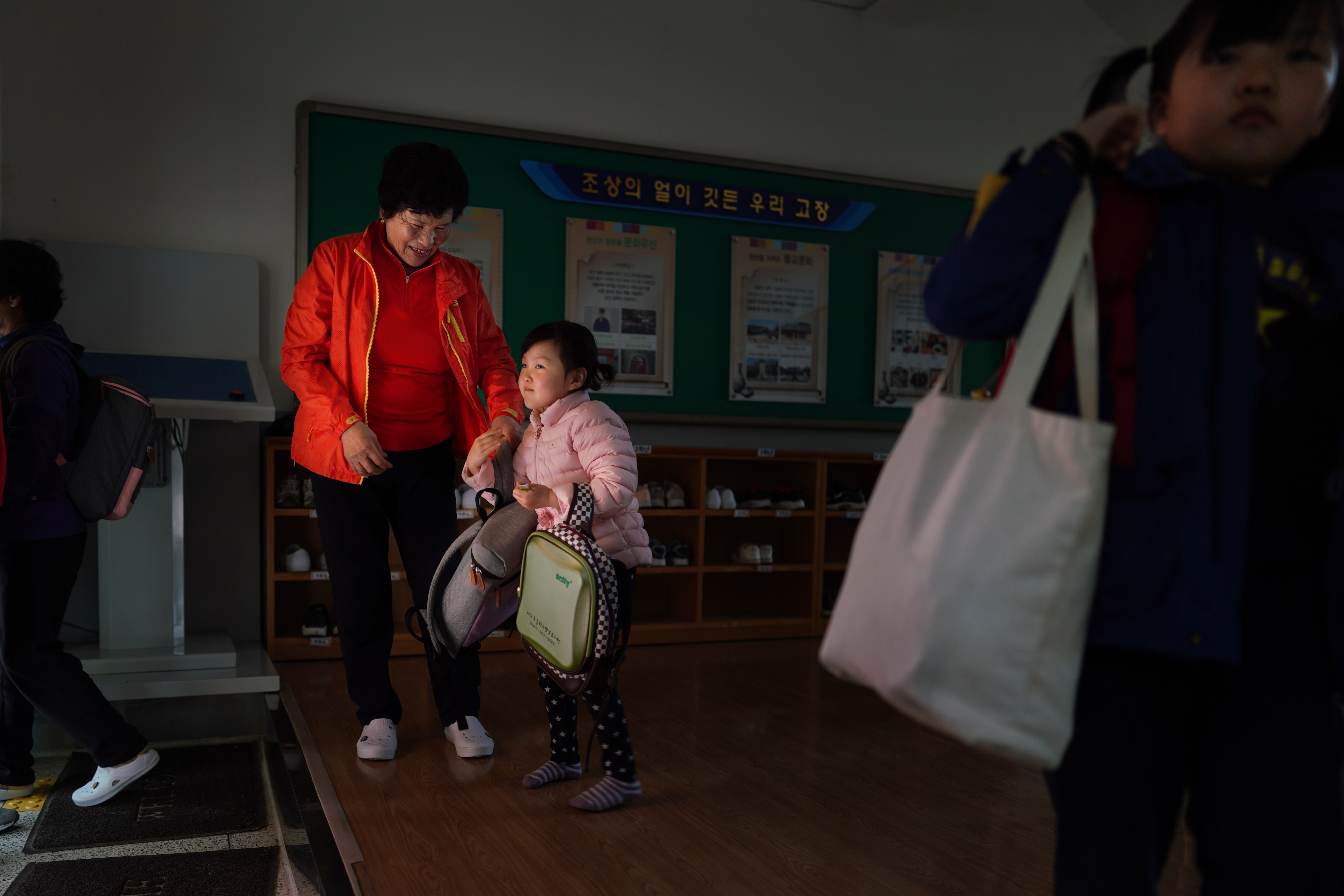 “They are eager to learn,” said Jo, the teacher, about her first-grade students. “They are probably the only students here asking for more homework.”

Unlike other classrooms, the first graders’ classroom has a sofa and a heated mattress. During breaks, the older women sat on the warm mattress and buried their feet under blankets. They also kept a basket of candies for the second graders next door who occasionally came to visit.

But Hwang felt bad that she was in school during a busy strawberry harvesting season. To make up for it, she rose at 4 a.m. and helped her husband, son and daughter-in-law pick strawberries before going to school.

“I am going to run for president of the village women’s society,” she said. “People used to ask me to run, but I always declined. It’s a job for someone who can read and write.”