Black Americans are two-and-a-half times as likely as white Americans to be killed by police officers. The death of George Floyd is another moment of reckoning in the history of racism and police brutality in the US.

Stun guns, tear gas and rubber bullets. It’s hard to look beyond what’s unfolding in the US right this moment.

US President Donald Trump has vowed to use the military to ‘dominate streets’ while taking aim at ANTIFA activists for the violence. 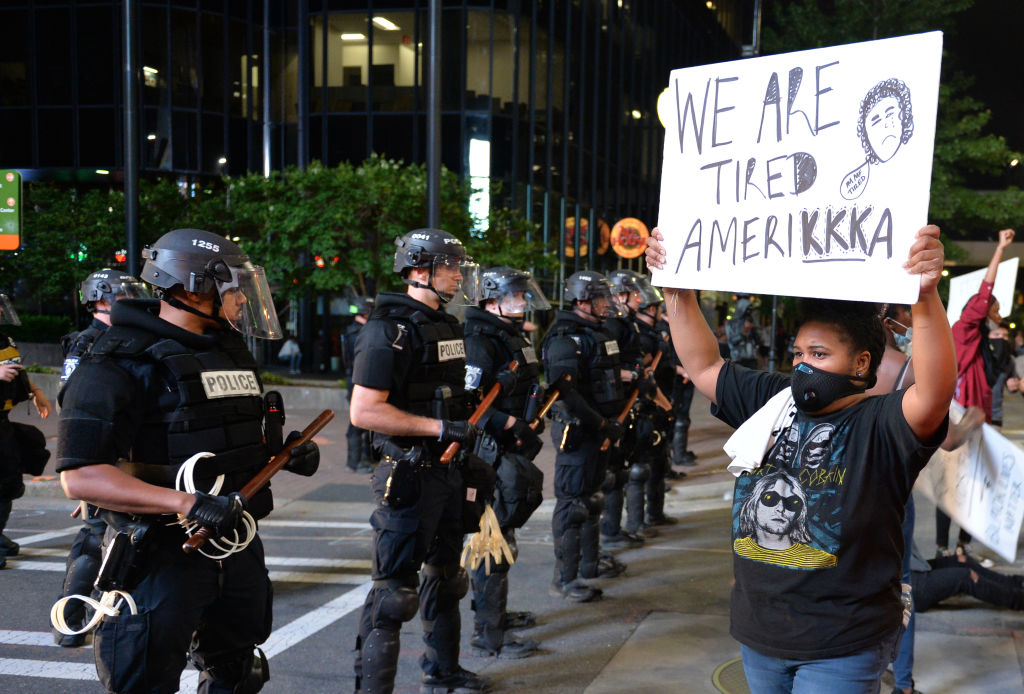 The protesting across the country follows a long history of law enforcement and civil rights campaigns in the US. This timeline provides key moments to help you understand how George Floyd’s death fits into the bigger picture of policing and race in the US.

Policing in the southern-states has its origins in slave patrols: groups of armed white volunteers using vigilante tactics to enforce slavery. The groups located and returned black slaves, especially those who had escaped, to US southern states. Slave patrols began in South Carolina in the early 1700s then began being practiced throughout the colonies.

Slave patrols were legitimised through Fugitive Slave Laws. These laws required that all escaped slaves be returned to their “masters” even if found in “free states.” It was also known as the “Bloodhound Bill.”

Slave patrols were officially dissolved after the Civil War and the Emancipation Proclamation, though there are accounts of informal patrols continuing after this period.

After slavery was formally abolished, official slave patrols dissolved. Government policies in the southern states called the ‘Black Codes’ dictated who formerly enslaved people could work and for how much compensation. Codes, particularly in the south, gave a legal avenue to control the lives of black citizens. 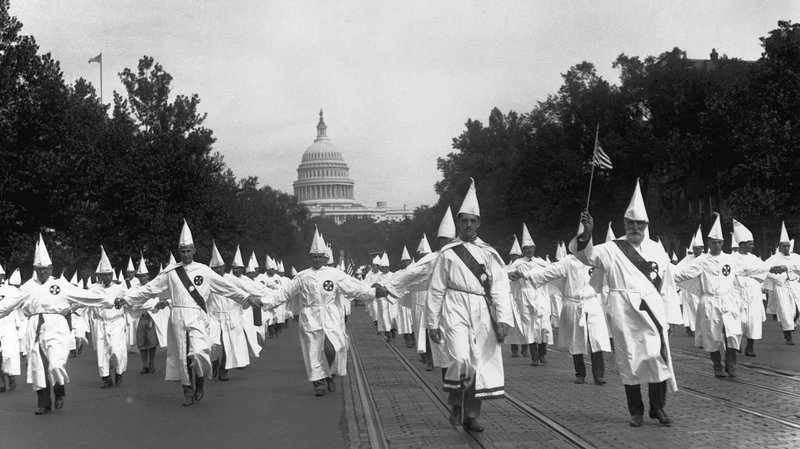 At the time, police departments were being established in major cities to protect the wealthy. Police were unarmed until 1858.

During this era, the lynching of African Americans was commonplace and perpetrators were not punished by law enforcement. The Ku Klux Klan could be considered to be at its most ruthless in this era. The judicial system did not hold police accountable for their own brutality or for failing to intervene when black people were murdered. 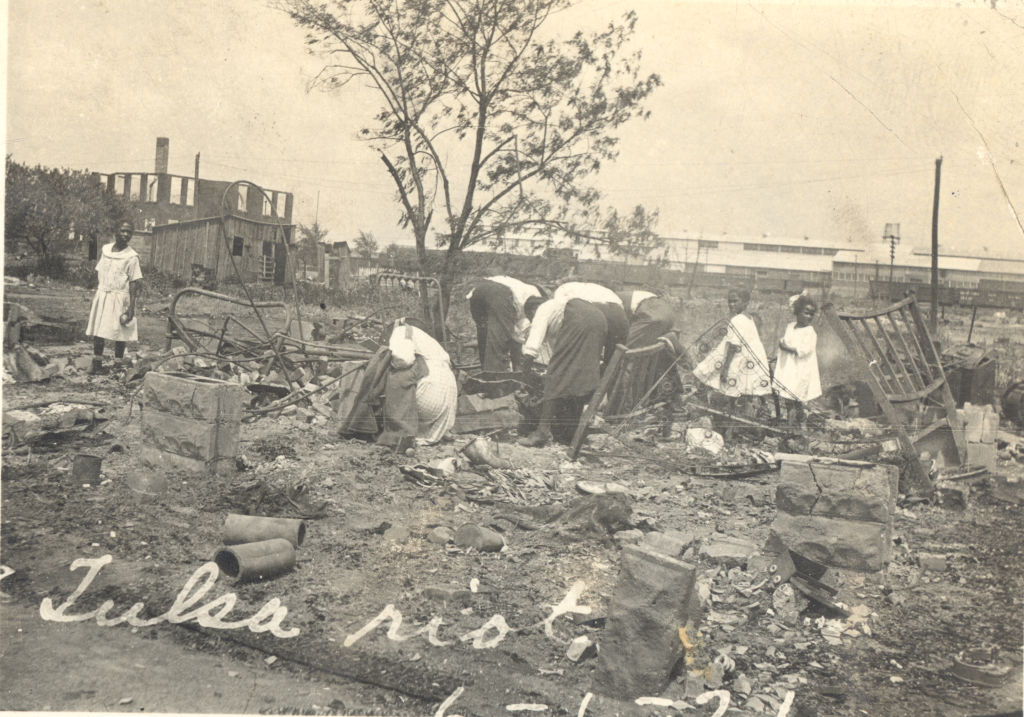 One of the most violent incidents that marked this period was the Tulsa race massacre in 1921, and the anniversary fell just a few days ago, on Monday. Mobs of white residents attacked black residents after a 19-year-old black shoe shiner was accused of assaulting a 17-year-old girl. White residents looted stores and burned homes. The death toll is estimated to be between 39 and 300 people, and thousands were left homeless. The massacre was largely omitted from local, state, and national histories, this year it became part of the Oklahoma school curriculum.

After World War II and the rise of the civil rights movement, Jim Crow laws ended in 1964 when the Civil Rights Act was passed.

Police brutality has been a catalyst for protests since the 1960s, including the Watts Riots of 1965 and the Detroit Riot of 1967.

Riots also broke out in Miami in 1980 when 33-year-old Arthur McDuffie died from injuries sustained at the hands of four officers trying to arrest him after a high-speed chase. The officers were acquitted.

The beating of construction worker Rodney King in 1991 by white Los Angeles police officers - which was filmed by a civilian - sparked further debate about civil rights and triggered a six-day riot after the acquittal of the officers. Los Angeles endured several days of rioting due to the acquittal of the LAPD officers who beat Rodney King.
Corbis Historical/Photo by Ted Soqui/Corbis via Getty Images

The rise of the Black Lives Matter movement

The shooting death of teenager Trayvon Martin in 2012 at the hands of a volunteer Neighbourhood Watch person George Zimmerman yet again triggered an outcry on the treatment of African Americans in contemporary US society. A year later, Zimmerman was acquitted of second-degree murder and manslaughter charges, sparking protests and the birth of the hashtag #BlackLivesMatter, which made way for the movement. A picture of Trayvon Martin, who was fatally shot by neighbourhood watch volunteer George Zimmerman in 2012.
hoto by Joe Raedle/Getty Images

Between 2013 and 2019, police in the United States are documented to have killed 7,666 people. The number of citizens killed by police in the US has been shown to disproportionately affect black citizens, despite only making up only 13 percent of the total population.

Between 2013 and 2019, police in the United States are documented to have killed 7,666 people. The number of citizens killed by police in the US has been shown to disproportionately affect black citizens, despite only making up only 13 percent of the total population.

In 2014, Eric Garner died after police put him in a chokehold in New York. The officer was not charged with a crime but was ultimately fired. 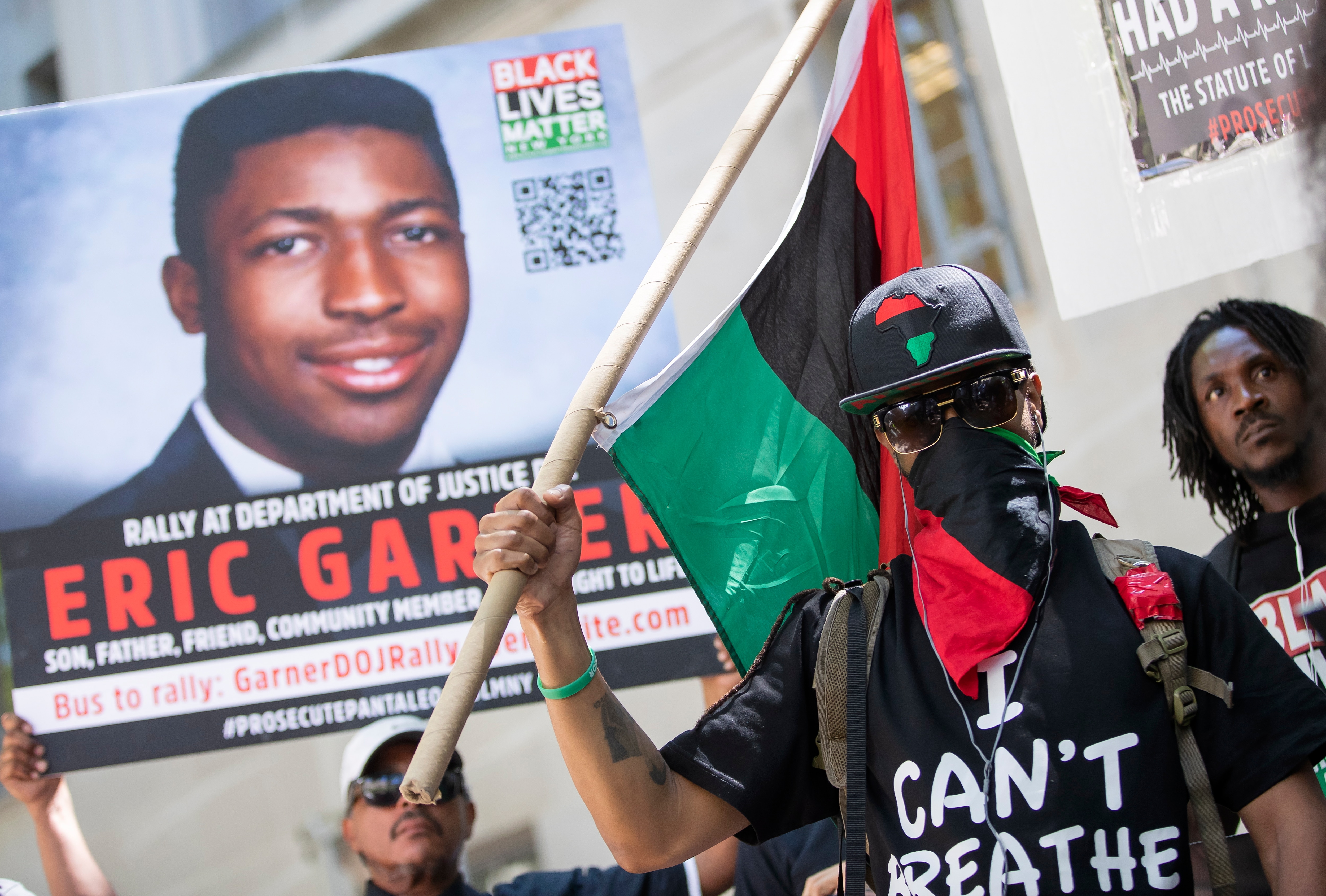 A man covers his face as he wears a shirt with Eric Garner's last words during a Black Lives Matter protest.
AAP

In that same year, Michael Brown, an unarmed black teenager, was shot and killed by police in Missouri. Again, the officer who fired the bullet was not charged.

Donald Trump’s presidency has been earmarked by race-tensions, including Charlottesville’s ‘Unite the Right’ rally in 2017 where a car was driven into a group of counter-protesters. Trump did not denounce the demonstrations but said, “You also had some very fine people on both sides.” Neo-Nazi James Alex Fields was sentenced to life in prison for the death of a woman killed during the protest. 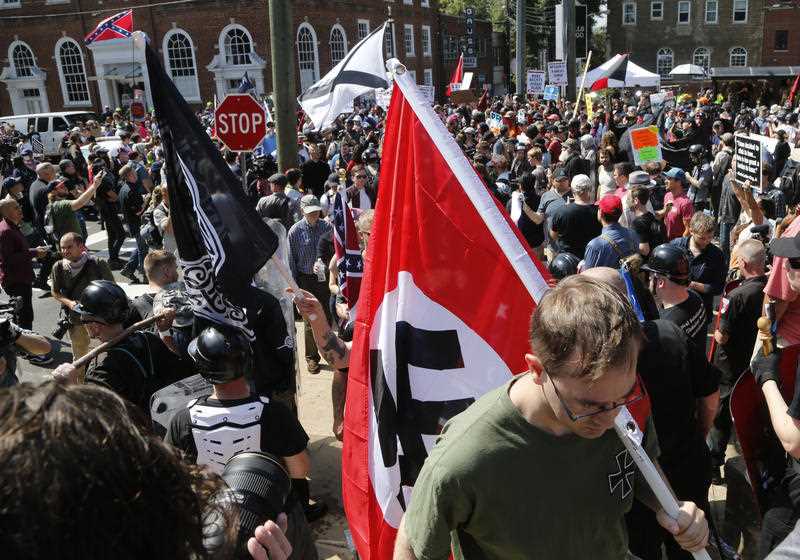 A white supremacist carrying a Nazi flag into the entrance to Emancipation Park in Charlottesville, 2017.
AAP

The weeks before the riots

In February this year, 25-year-old Ahmaud Arbery was killed by two white men while jogging in his neighbourhood outside Georgia. Father and son Gregory and Travis McMichael were charged over his murder, but only after the video emerged. Ahmaud Arbery, 25, was killed on 23 February while out going for a jog.
Twitter

Tensions were mounting, compounded by the coronavirus outbreak and its disproportionate impact on the African American community.

Weeks later, on March 13 in Louisville, Kentucky, three white policemen forced their way into the home of a black woman, Breonna Taylor, and shot her as part of a drug investigation. No drugs were found in her home.

Another video went viral last week showing a white woman calling the police to say she felt her life was threatened by an African American birdwatcher in New York’s Central Park. The man, Christian Cooper, had only asked the woman to put her dog on a leash.

Oh, when Karens take a walk with their dogs off leash in the famous Bramble in NY’s Central Park, where it is clearly posted on signs that dogs MUST be leashed at all times, and someone like my brother (an avid birder) politely asks her to put her dog on the leash. pic.twitter.com/3YnzuATsDm

Then footage emerged of George Floyd, 46, being allegedly killed by a white police officer who kneeled on his neck for 8 minutes and 46 seconds while pleading with the officer.

The Minneapolis Police Department itself has long been accused of racism, with the department receiving many excessive force complaints. The police officer, 44-year-old Derek Chauvin, who kneeled on Floyd had several complaints filed against him. 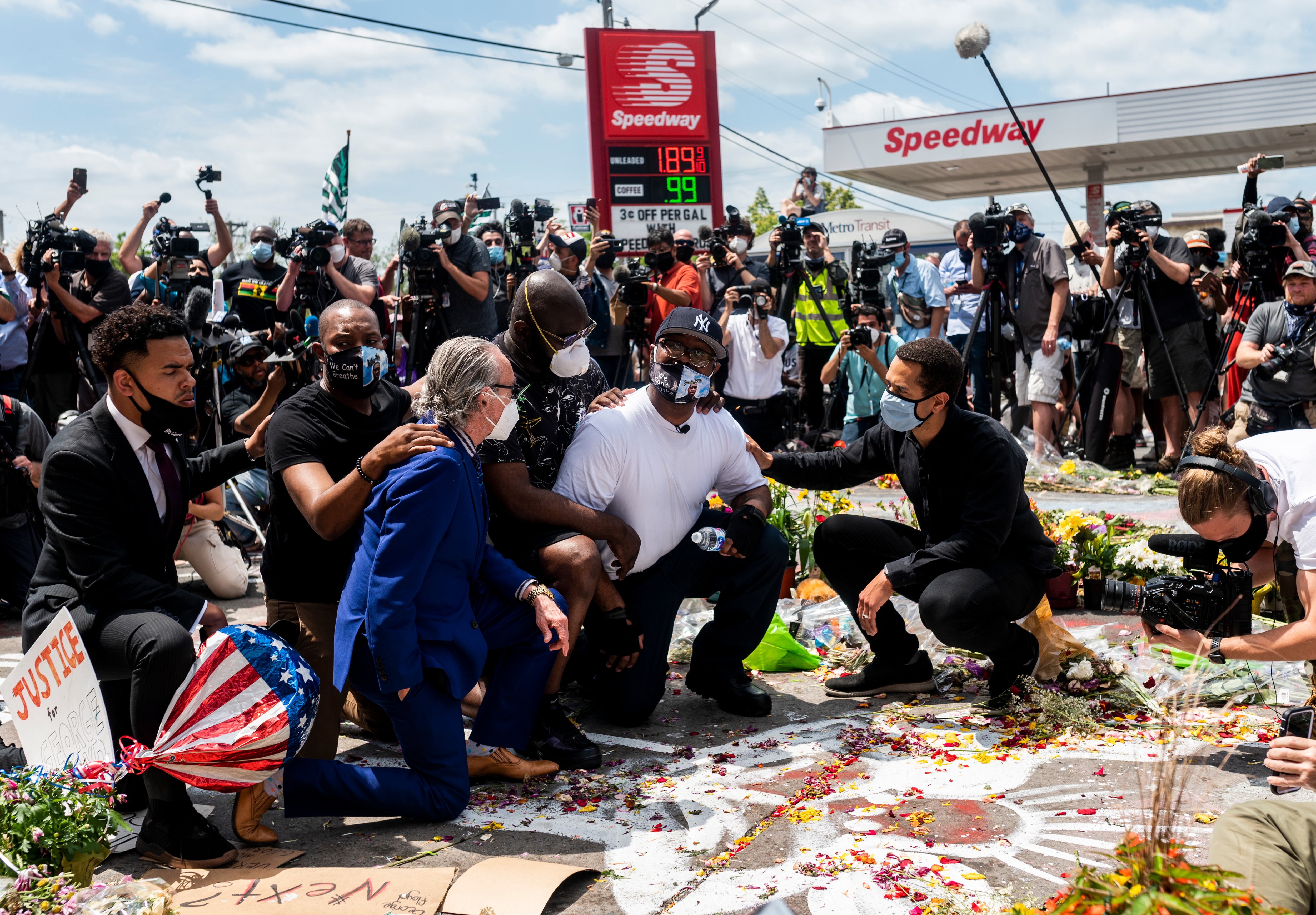 Terrence Floyd knelt to pray at the spot where his brother died one week earlier.
Getty Images North America

George Floyd died on Monday and protests began in Minneapolis on Tuesday. The four officers involved were stood down after the video went viral. Chauvin was charged with murder on Friday.

Two separate agencies, including the FBI, have been called to investigate.

Protests that started in the city have now spread across the country, and even internationally, as the US once again reckons with racial bias within its law enforcement. 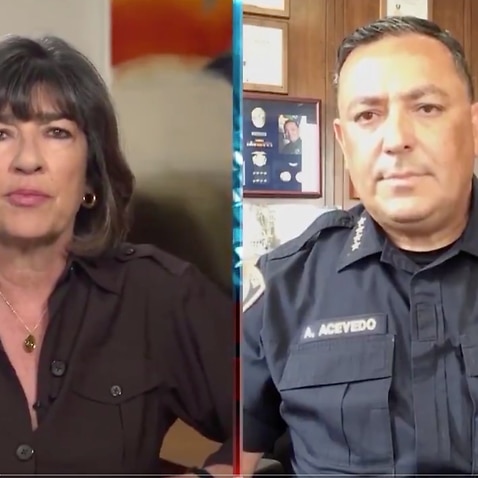 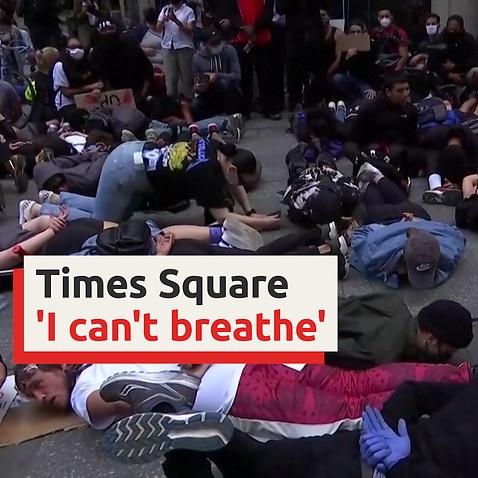 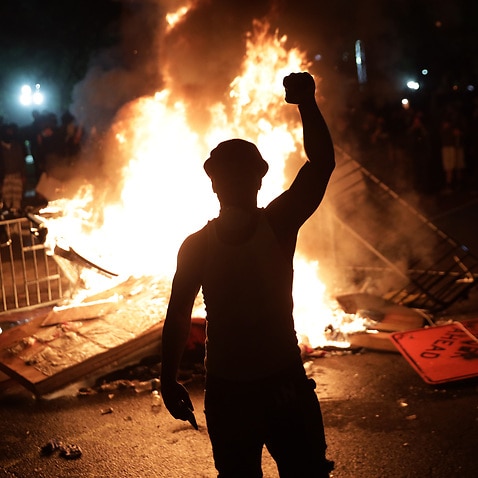