As relations between Sweden and Russia grow increasingly strained, the global ‘prepper’ movement is finding an unlikely home in the neutral Scandinavian nation.

Why has disaster prepping has become a government sanctioned pastime in Sweden? Watch Sweden's Crisis Preppers On Demand.

Across Sweden, a growing survivalist movement is emerging, with the government encouraging its citizens to be ‘prepared to handle a heightened alert or the threat of war’.

Spurred into action by reports of so-called Russian acts of aggression and unprecedented wildfires in 2018 that forced many to evacuate their homes, the movement has developed from the fringes of Swedish society, and is now encouraged by authorities.

With three kids, a government job and a firm love for the Swedish tradition of fika or coffee and cake, 48-year old Lotta Dalenius hardly fits the image of a typical doomsday prepper.

“I can see that the Russian threat has increased in the last few years,” she tells Dateline inside her home in the sleepy town of Vaxjo, Sweden.

“Just look at Ukraine, a European country which has been invaded.

“There's a game going on, who's going to threaten who. So we have to be on the lookout and be prepared.”

Advocating self-reliance against potential disasters or emergency, Dalenius and her fellow ‘preppers’ are actively readying for the worst-case scenario by stockpiling food, water and other essential supplies needed to survive off-grid.

They share their tips via social media, under an increasingly popular hashtag #prepperSE.

A basic kit for preppers includes, food, safety supplies and a radio.
Dateline

Selling everything from knives, fire-starters, radios and pre-made bug-out bags, Frederik opened the store as a joke in 2013 after he lost his job and took up watching zombie films with his friends.

But the changing political dynamic in the region has shifted his luck.

“In the first year, I think preppers were still regarded as a bit crazy,” he tells Dateline.

“But now, I think most people realise that it's not crazy to be prepared, it's more crazy to think that nothing is ever going to happen.”

He says the growing concern over regional politics is making the movement more mainstream.

“It's more or less, everyone (buying this stuff),” he adds.

“When I started, I thought the normal customer would be male, maybe fifty-something, living in the countryside. But a lot of customers are female, maybe 25-30 per cent. A lot of them live in big cities.”

The big increase in Sweden comes after the government issued a Cold War-era civil emergency advice booklet to 4.8 million households in 2018 exhorting them to prepare for the worst.

Titled If Crisis or War Comes, the booklet includes tips on home preparedness and a checklist of essential ‘prepper’ items such as food, water, warmth and communications. It also contains information on the country’s warning systems for incidents such as air raids and instructions on how to find the nearest bomb shelter in the event of war.

The booklet is part of a nationwide move by the Swedish Government to bolster its military and revive an old Cold War strategy known as Total Defence for the first time in more than half a century. 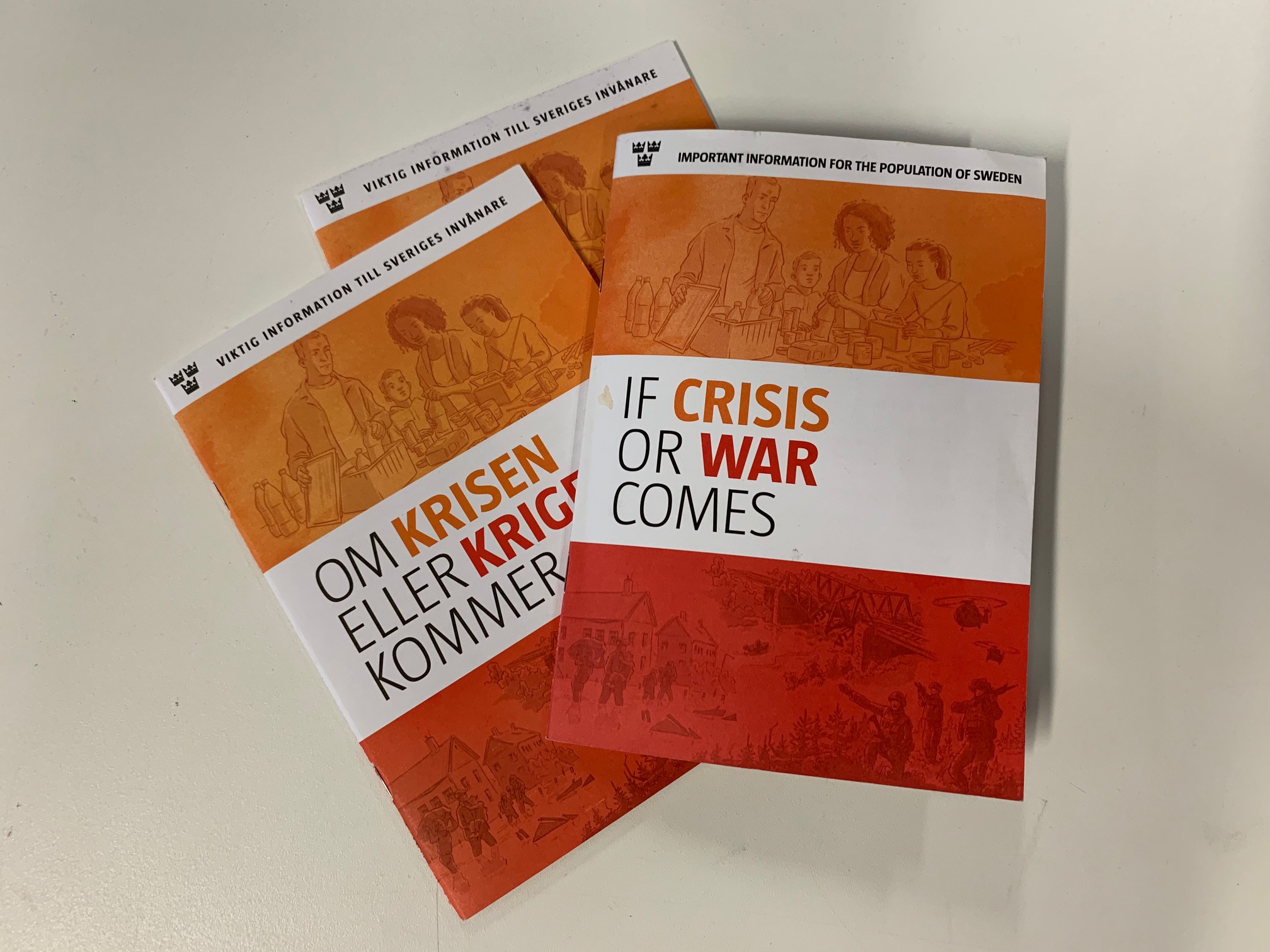 Sweden's government has distributed millions of If Crisis or War Comes to its citizens.
Dateline 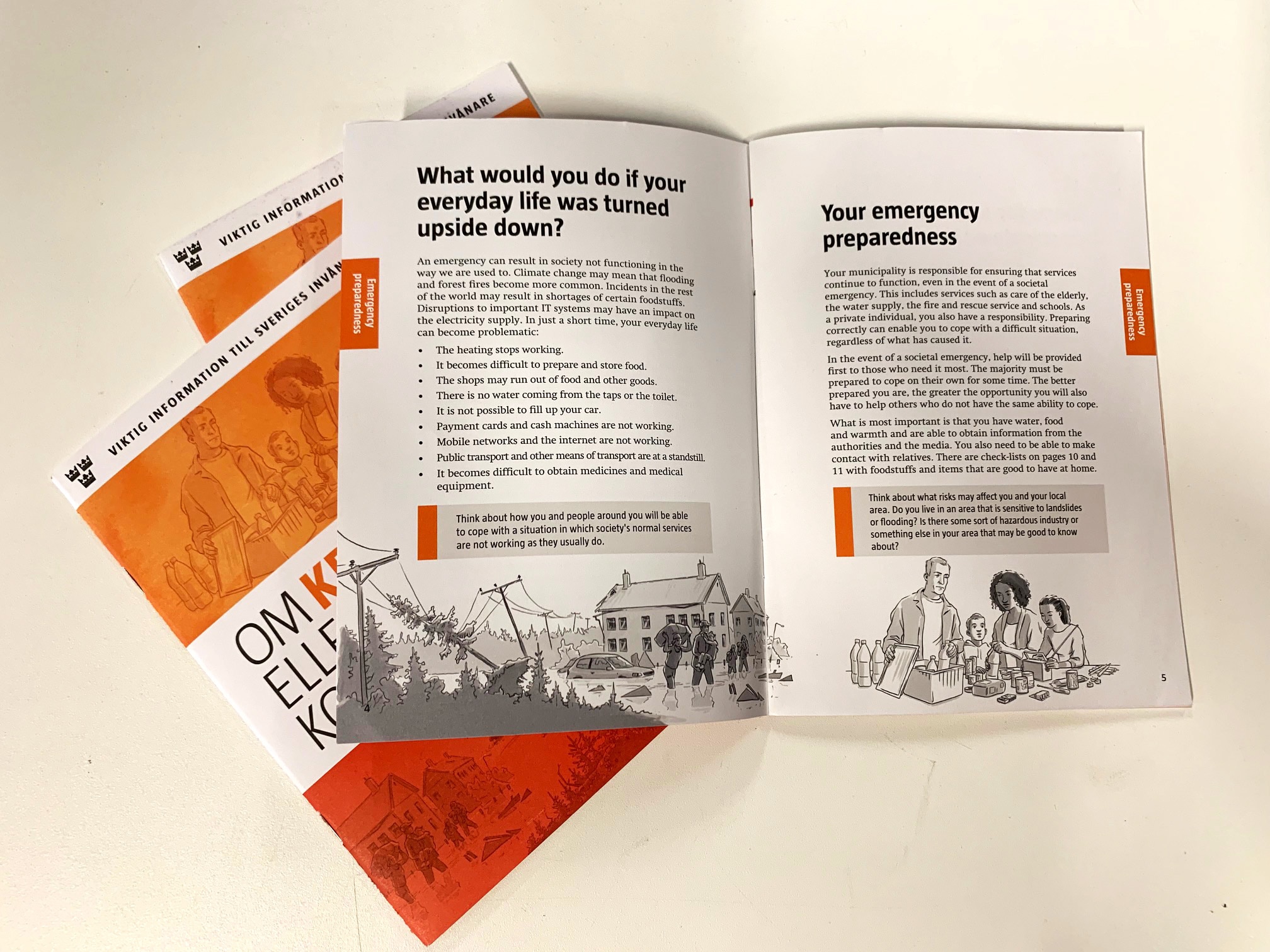 If Crisis or War Comes has detailed instructions for Swedish citizens for before or after potential threats.
Calliste Weitenberg

Christina Andersson from the Swedish Civil Emergency Agency that drafted the booklet told Dateline all people living in Sweden have a duty to help if there is a situation or danger of conflict.

“We are putting more effort into our Total Defence, that means to the whole society to be prepared to handle a heightened alert or the threat of war,” Andersson said.

This includes re-activating conscription services, boosting military spending and re-establishing a garrison on Gotland Island in the Baltic Sea.

“The last 30 years or so, we haven’t put so much money into [defence] capabilities, instead we have focused on peace time crisis like IT attacks, flooding and bushfires,” she added.

“But now the last two or three years, the government has decided that we should put more effort into Total Defence due to the changing security policy situation.”

Historically neutral, Sweden ranks just behind Australia as the 14th most peaceful country in the world by the Global Peace Index (GPI). However, fears of a Russian threat to its homeland security intensified following The Kremlin’s annexation of Ukraine in 2014.

Reports about the risk of Russian espionage intensified in February, when Swedish authorities arrested an IT worker, suspected of being “recruited as an agent by a Russian intelligence officer posing as a diplomat in Sweden.”

Also in February, Sweden’s Defence Research Agency made the shocking announcement that Russia is training for large-scale war.

“My conclusion was that Russia’s preparing its armed forces for large scale war. And in the Russian context, that pertains to basically war over a continent,” the agency’s military analyst, Johan Norberg told Dateline.

Whether the worst comes or not, preppers like Dalenius find comfort in knowing they’re equipped to survive.

“If the shit never hits the fan, well that’s great,” Dalenius says. “At least I know that I had the ability to support myself and my loved ones. And that – I think that’s a great feeling.”