COMMENT: Eight of the world's 10 countries that have no recorded cases of COVID-19 are in the Pacific. Dane Moores is Policy Manager at World Vision Australia. He analysis, why is the Australian Government investing half a billion dollars to bankroll the roll-out of a COVID-19 vaccine across the region.

While the number of people infected in the Pacific has been incredibly low, almost everyone has been affected – not surprisingly, as most Pacific island economies are so dependent on tourism. The widespread distribution of a vaccine in the region is, therefore, critical to reopen economies, rebuild livelihoods and protect the development gains we have achieved together over the last two decades.

Pacific island nations are a global success story in preventing COVID-19 from reaching their shores. Strict border closures have kept the islands largely free of the virus, almost a year after the pandemic began spreading across the globe. While lockdowns have been critical to safeguard public health and protect vulnerable health systems, the economic cost has been massive.

The Pacific's economy, more so than almost any other region, is dependent on the safe and free movement of people. The great COVID-19 lockdown has wrecked Pacific economies. Tourism – the backbone of many island nations – has collapsed.

Before COVID-19, tourism accounted for 38 per cent of Fiji's GDP and employed 118,000 people. In Vanuatu tourism made up 48.2 per cent of the country's GDP in 2019. Thousands of tourism workers in the region lost their jobs in the great lockdown, leading to declining government revenue and greater demand for social services, stretching already weak systems to breaking point.

The economic impacts of the pandemic are not only limited to the tourism sector. Labour migration, and the money workers send back home, have also been disrupted.  This includes short-term labour programs from the Pacific to Australia and New Zealand, as well as labour migration within the Pacific itself. Remittances are very important for some Pacific countries: they were 24 per cent of GDP for Samoa and 43 per cent for Tonga in 2019.

A COVID-19 vaccine is vital for economic recovery because of the high reliance of Pacific island economies on the free movement of people, and is critical to ensure vulnerable Pacific Island communities do not fall back into poverty.

The Australian Government is increasingly recognising this and has stepped up its response in recent months. In August, the Government announced it would contribute $80 million to the international COVAX Facility to improve vaccine access for high-risk populations in 92 developing countries. Then, as part of the delayed October Federal Budget, Australia committed an extra $23.2 million for vaccine access and health security in our immediate Asia-Pacific region. This was followed in October by a $500 million pledge to distribute millions of COVID-19 vaccine doses to countries in South-East Asia and the Pacific region.

The scaling up of Australia’s vaccine assistance reflects the size of the challenge facing the region, and the globe.

The logistical challenges of distributing the vaccine across the Pacific will be considerable, given the large distances between isolated and sparsely populated islands. Another challenge will be re-establishing dormant supply chains to deliver the vaccine.

However, beyond the logistics, there is another dimension to the vaccine roll-out that will be critical to its success: trust. From experience, World Vision knows building community trust and ownership is key to the success of any community development initiative, and especially in immunisation programs.

For example, World Vision worked as part of a coalition of organisations to bring an Ebola vaccine to West Africa during the 2014-16 outbreak. A key part of this was working with community leaders and health workers to share accurate medical information and promote acceptance of the new vaccine, so the right people would receive the right vaccine at the right time. This was critical to improving take-up rates and ultimately managing the devastating outbreak.

Even in Australia, misinformation about COVID-19 (and vaccinations more broadly) is widespread, and there is increasing mistrust of what some believe is a rushed vaccine. Strong community engagement and education will, therefore, be essential during the COVID-19 vaccine rollout. In the Pacific, this means working with trusted partners – churches, faith leaders and established non-government organisations – to not only deliver the vaccine, but also to share information and build community confidence.

The 2019 measles outbreak in Samoa is a great example of what happens when people lose faith in immunisation programs. In 2018, two infants died in Samoa after they received the Measles, Mumps and Rubella vaccine. The cause was later found to be human error, after the vaccines were incorrectly mixed with an expired anaesthetic, but vaccination rates still plummeted, mistrust spread and, soon after, measles did too. This led to the 2019 measles outbreak and the death of 83 people, mostly children under five, in just a few months.

The fast, safe and equitable roll-out of a COVID-19 vaccine across the Pacific region will help economies to reopen and recover, enabling vulnerable families to rebuild their lives and livelihoods.  The Government’s commitment to funding this roll-out is definitely welcome, but it needs to be implemented in a careful and considered way, with trust at its centre. 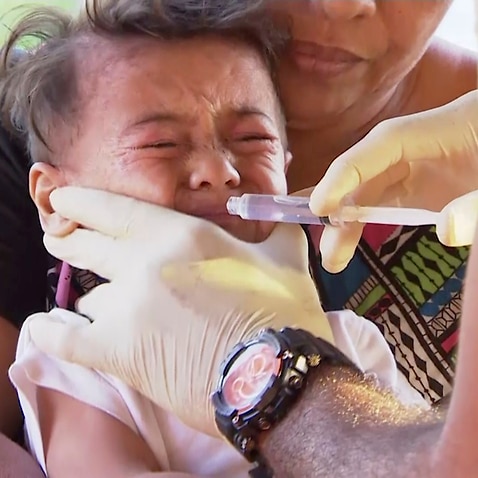