In the aftermath of Sri Lanka's Easter Sunday attacks, false stories and rumours spread so widely and rapidly the government took drastic action to block many social media services.

In the hours after Sri Lanka’s Easter Sunday attacks, the Sri Lankan government took the drastic action of blocking access to social media sites within the country.

In a misguided attempt to prevent the spread of false news reports and rumours about who was responsible for the attacks, messaging services including Facebook Messenger, WhatsApp, Instagram and Viber were blocked. However, through the use of VPN (virtual private network) services that can reroute internet connections outside of the country, many people were able to circumvent the ban – not least, those intent on spreading misinformation.

On the Sunday of the attack, Prime Minister Ranil Wickremesinghe pleaded with the people of Sri Lanka to “please avoid propagating unverified reports and speculation.”

I strongly condemn the cowardly attacks on our people today. I call upon all Sri Lankans during this tragic time to remain united and strong. Please avoid propagating unverified reports and speculation. The government is taking immediate steps to contain this situation.

This was not the first time Sri Lanka had encountered a problem with the spread of speculative and even hateful content on social media. The country blocked Facebook in March 2018 after posts inciting anti-Muslim violence spread on the platform.

“They will share old videos and moments of racial unrest or gang related incidents. People believe it’s happening now and the fear spreads. They might think they’re helping, or filling an information gap, when it is sparse, but it is leading to problems.”

The false stories that spread after the attacks

Yudhanjaya Wijeratne, a researcher at LIRNEasia, an Asia-Pacific think tank, runs watchdog.paladinanalytics.com, a website dedicated to fact checking rumours that have spread in Sri Lanka since the attack.

Among the debunked claims are stories of:

News service Agence France-Presse ran a fact check across viral social media posts following the Easter Sunday attacks. Images below have been debunked  as existing photos from the agency’s archive. 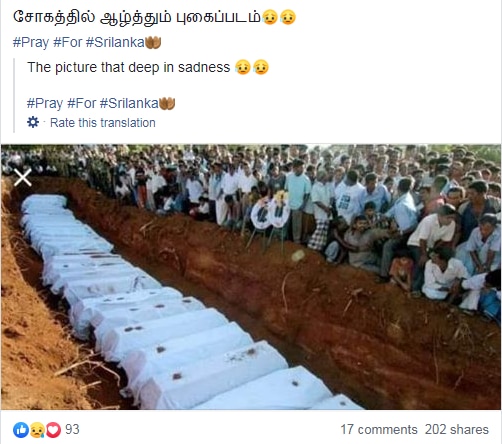 This AFP photo from 2006 was shared as an image of a mass funeral after Easter Sunday attacks.
AFP This video of an alleged bomber is a story from 2018 of a man dressed in a burqa who attacked someone over a debt.
AFP The photograph was taken on in Afghanistan August 20, 2009 by AFP photographer Banaras Khan and claimed to be Sri Lankan Muslims.
AFP

Why false news stories spread after a crisis

“The core of what we use the term ‘fake news’ for is deliberate misinformation. That is, trying to deceive people into believing something is true that isn’t,” he tells Dateline.

“To some extent it’s human nature. You haven’t got all the facts. You’re trying to piece together what’s going on.

“Social media can amplify that and put a larger group together to work out what’s going on and speculate on who is behind all of this and so on.”

The recent social media bands are not the first for Sri Lanka. After rumours and video spread on social media sparked violence between Buddhists and Muslims the government shut down social media in a bid to quell the violence.

It is not the first country to temporarily block social media communication in the name of public safety. Facebook was blocked in Egypt during 2011’s Arab Spring, as well as in Vietnam during protests in 2016.

“In some cases governments can try to shut down and block social media altogether to prevent the circulation of rumours,” Bruns said.

“This happened early on in the Arab Spring, when the Egyptian government at the time tried to shutdown twitter and other social media platforms. In the end users used VPNs to get around it.

“The Sri Lanka bombings had rumours circulating and outright misinformation as well.”

Bruns added following events like Sri Lanka and New Zealand’s Christchurch attacks, social media became a battleground to push an agenda or perspective – as stories and comments are propagated to build arguments for or against beliefs.

“I think it happened more in internationally with the alt right movement to either draw attention away from the far right terrorist who attacked the mosque in Christchurch and to attract more attention to the group who is behind the Easter attack in Sri Lanka,” he said.

“Whenever these things happen there’s an attempt to interpret them according to a world view, to use it as a further link in the chain of conspiracy theory or particular ideologies by framing the events in a particular way. That’s happening mores after these events.”

The criticisms and current ban

Sri Lanka’s ban was not without its critics from both in and outside the country.

“The blackouts deprived Sri Lankans of impartial news reports and disconnected families from each other as they sought to find out who had survived and who was among the dead and injured. Most strikingly, recent research suggests that the blackouts might have increased the potential for protest and violence in the wake of the attack.”

“Blocks don’t work for a number of reasons; they strengthen the very news they were intended to contain or control. In the context of Sri Lanka, given the bitter experience we have had with censorship of the media and dictatorial rule, those who somehow circumvent social media blocks, continue to do so. Those who push back on rumour and strengthen truth telling and truth seeking and maintain civil discourse, we are at a disadvantage.”

Three weeks after the Easter Sunday attacks, Sri Lanka has again introduced a social media ban. After it was lifted in late April, violence between groups of citizens in the region of Negombo has prompted authorities to reintroduce a curfew in the area in addition to blocking social media.