More than five months since South Korea contained its initial coronavirus outbreak - also sparked by a religious gathering - the country is grappling with increasing numbers.

South Korea has warned it is on the brink of a new COVID-19 crisis after more than 400 infections are traced to a Seoul church.

South Korea has added almost 1,000 new cases over the past week after 400 infections were linked to the Sarang Jeil church, whose leader, Jun Kwang-hun, and some of the church’s members tested positive for COVID-19.

The leader, also a conservative activist, has led protests against government-imposed lockdowns, including a demonstration in Seoul on Saturday attended by thousands of followers.

The health ministry said it had filed a complaint against Jun for violating self-isolation rules by taking part in a rally on Saturday, and for “obstructing” a medical investigation into the outbreak by failing to provide a full list of church members for testing and tracing.

On Saturday, thousands of demonstrators took part in street protests against President Moon Jae-in's policies, defying a ban on rallies in the capital and social-distancing warnings.

This incident echoes the story of South Korea’s initial outbreak which was traced to religious sect, Shincheonji. More than 5,000 cases were linked to the group. Leader Lee Man-hee was arrested for allegedly giving inaccurate records of church gatherings and false lists of its members to health authorities.

Aside from the infections linked to the church, there were also smaller clusters, including about 30 cases linked to a Starbucks outlet in the city of Paju, north of Seoul. Lee Man-hee, a leader of Shincheonji Church of Jesus, speaks to the media during the press conference in Gapyeong, South Korea.
AAP

Religious gatherings are high-risk for coronavirus hotspots. Tightly packed and passionate prayer services in some South Korean churches have made them particularly vulnerable to the virus.

Professor Raina MacIntyre, Head of the Biosecurity Program at the University of NSW, explains that congregating indoors with poor ventilation and singing means the disease spreads easily.

“Singing increases the aerosol emissions of the virus,” she said.

When someone who's infected with COVID-19 coughs, sneezes, talks loudly or sings, they spray out a shower of secretions -- or aerosols.  These small pieces of floating liquids can contain pieces of the coronavirus and can be a major contributor to its spread.

When a person coughs, talks, breathes, or sings, they throw anywhere between 900 to 300,000 liquid particles from their mouth. To reduce the risk, Professor MacIntyre told SBS Dateline that it should be mandatory to wear a mask during religious gatherings, and even better if they are held outdoors.

“But it remains risky,” she said.

South Korea has comprehensive contact tracing born from laws created after the botched management of the Middle East Respiratory Syndrome (MERS) in 2015. Church leaders’ refusal to give details of their congregations meant authorities were able to prosecute.

The Sarang ​Jeil Church has been as controversial as Shincheonji -- a religious sect often described as a cult.

He claimed that the outbreak in his church had been caused by a “terrorist” attack aimed at crippling its political activism. 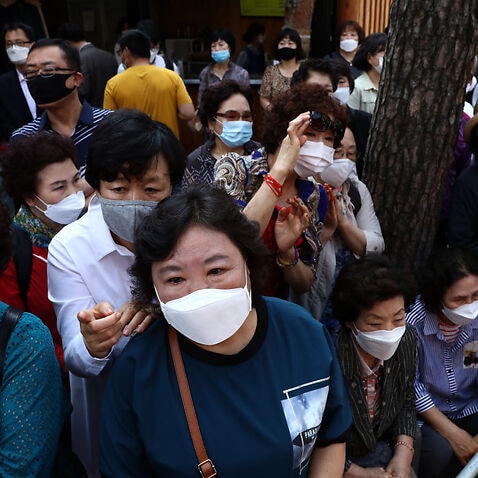 South Korea and Australia are experiencing 'second waves', but for different reasons