Confused by what happens next in regards to Brexit? Here's the options explained.

Parliamentarians will this week decide how and when Britain should leave the European Union in a series of votes that could determine the country’s prosperity for decades to come.

With Britain due to leave the EU on March 29, and no agreed direction for the world’s fifth-largest economy to take, Prime Minister Theresa May will ask lawmakers to vote on up to three possible outcomes.

WHAT WILL PARLIAMENT VOTE ON?

On Tuesday, they will be asked if they support May’s deal. The deal was heavily rejected in January and May has yet to agree with Brussels any of the changes that parliament has asked for.

If the deal is rejected, lawmakers will vote on Wednesday on whether the government should pursue a no-deal exit. Critics warn that such an exit would cause an economic shock, but some Brexit supporters say it is the only way to break free from Brussels. What next for PM Theresa May and Brexit?
AAP

If lawmakers reject a no-deal exit, the government will hold a vote on Thursday to ask parliament whether Brexit should be delayed. Ministers have argued that a delay would open the door to Brexit being reversed through a second referendum.

WHAT HAPPENS ON TUESDAY?

Lawmakers will spend several hours on Tuesday debating the prime minister’s deal. The debate is likely to start around 1300 GMT and is expected to culminate in votes at around 1900 GMT.

The vote will be on a statement saying that parliament approves a two-part deal: a legal withdrawal treaty, and a political declaration on future relations with the EU. Parliament must approve the deal before it can be ratified.

Lawmakers are expected to try and make changes to the text of the statement to show that there is majority support for an alternative course of action or to make backing the deal conditional on something such as a second referendum.

These so-called amendments will be submitted in advance and, even if approved by a majority, will not be legally binding. However, their political power in demonstrating support for an alternative route could be hard to ignore for May. The speaker chooses which amendments will be eligible for a vote and announces his choice at the start of the debate. Amendments are voted upon before the government’s deal.

WHAT HAPPENS ON WEDNESDAY?

If May’s deal is rejected, the government has promised to give lawmakers the chance to show they want to pursue leaving the EU without a formal deal. Parliament has previously voted against a no-deal exit.

The exact details of this vote are not yet known, including which way May will instruct her Conservative Party to vote. Party policy has long been that leaving without a deal is preferable to leaving with a bad deal. 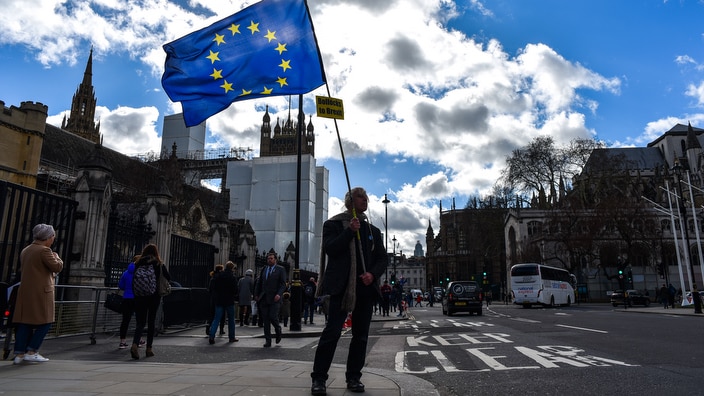 A man waves a EU flag outside the Houses of Parliament, London.
Getty Images

But, many ministers are opposed to a no-deal exit, meaning May could face resignations from her government if she asks lawmakers to back that policy.

The wording of the motion that parliament votes on will be subject to amendments, although it is not clear yet what changes lawmakers would seek to make at this stage.

The motion is not binding on the government, and May could theoretically continue negotiating in search of a deal parliament will approve.

WHAT HAPPENS ON THURSDAY?

If parliament does not support leaving the EU without a deal, the government has promised to hold a further vote, asking lawmakers if they want the government to ask for a “short, limited” delay Britain’s EU exit. 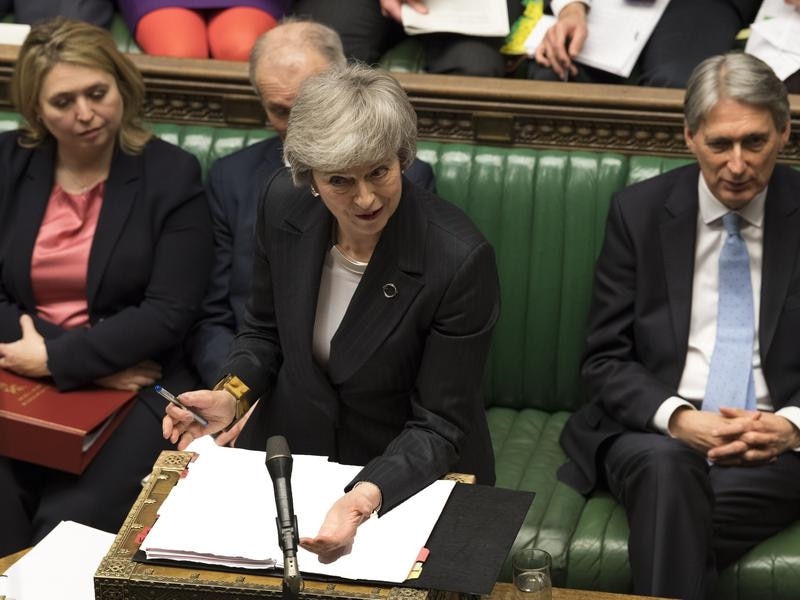 UK PM Theresa May (C) is putting the onus for changes in the Brexit deal on the EU.
EPA

The exact details of this vote are not yet known, including which way May will instruct her Conservative Party to vote.

Britain cannot unilaterally decide to delay Brexit, it has to seek agreement from the other 27 EU countries to extend the exit negotiations.

The wording of the motion that parliament votes on will be subject to amendments. Although it is not clear yet what changes lawmakers would seek to make, they could involve attempts to determine the length of any delay.