Defence Industry Minister Melissa Price charged taxpayers $77,254 – or more than $11,000 a day – for a recent week-long visit to Europe.

Documents obtained by SBS News under freedom of information laws show Ms Price, her Chief of Staff John Deller, Department of Defence Deputy Secretary Tony Fraser and an Aide-de-Camp spent $54,743 on business class flights, $11,865 on accommodation, $4,382 on official hospitality and meals, $1,628 on photography and $1,580 on hire cars. 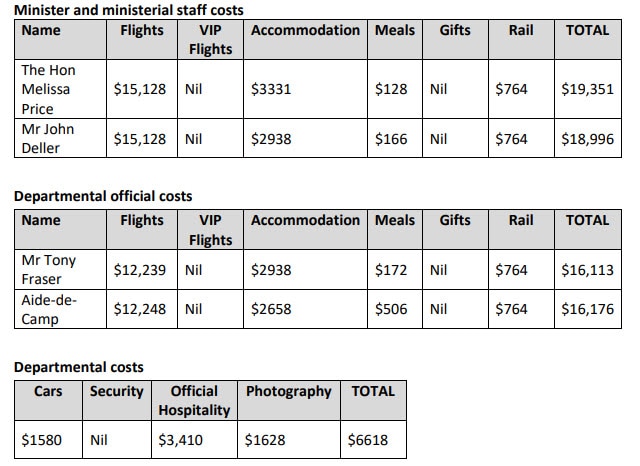 Last month, the Department of Defence told SBS News it estimated it would take officials 142 hours to process the freedom of information request at a cost of least $2,515, but following a backlash from journalists on social media it agreed to release the costs of the trip, without charge, within the usual 30 day statutory period.

The Australian Information and Privacy Commissioner Angelene Falk was asked about the response from the Department of Defence when she appeared before a Senate estimates hearing last month.

“I was concerned about the matters that were raised, and I was pleased to see that they were rectified,” Ms Falk told Senators.

The total costs of the trip were provided to SBS News on Monday night.

“This was an important trip to lead a delegation of 60 Australian small businesses on the world stage,” a spokesperson for the Minister told SBS News.

“The travel was within normal guidelines.”

I made an #FOI request for the cost of @Melissa4Durack’s recent trip to Europe. This was the estimated cost of processing it - 142 hours #FOIFriday #auspol pic.twitter.com/b1eF2KrWIf

In a media release announcing the trip in September, Ms Price said she was flying to Europe to support Australian companies at a defence tradeshow in the United Kingdom, participate in a Defence Industry and Innovation Day at Australia House in London and inspect Australia’s Future Submarine Program in Cherbourg, France.

Congratulations to Team Defence Australia for showcasing to the world our outstanding #defenceindustry businesses at the @DSEI_event tradeshow in London. I also met with major international defence companies to urge them to utilise our talented #Australian small businesses! pic.twitter.com/yWIdxsgsAj

In her previous and more senior role as environment minister, Ms Price travelled to Poland in December last year.

Following her demotion from cabinet after the election in May, Ms Price has led delegations to Europe and the United States.

The rules for government and opposition travel are set by the Independent Parliamentary Expenses Authority.