US President Joe Biden and vice-president Kamala Harris have expressed their relief at the guilty verdict against former Minneapolis police officer Derek Chauvin.

United States' President Joe Biden has described the death of George Floyd as "murder in the full light of day" as he said the guilty verdict against former Minneapolis police officer Derek Chauvin could be "a giant step forward in the march towards justice in America".

Mr Biden spoke from the White House on Tuesday hours after the historic verdict was handed down alongside Vice President Kamala Harris, with the pair calling for Congress to act quickly to address policing reform.

"Let's also be clear, such a verdict is also much too rare," Mr Biden said. "For so many people, it seems like it took a unique and extraordinary convergence of factors. For so many, it feels like it took all of that for the judicial system to deliver just basic accountability."

Graphic mobile phone footage of Mr Floyd's death during an arrest in May last year sparked Black Lives Matter protests across the world in 2020 and prompted a national discussion on police brutality. 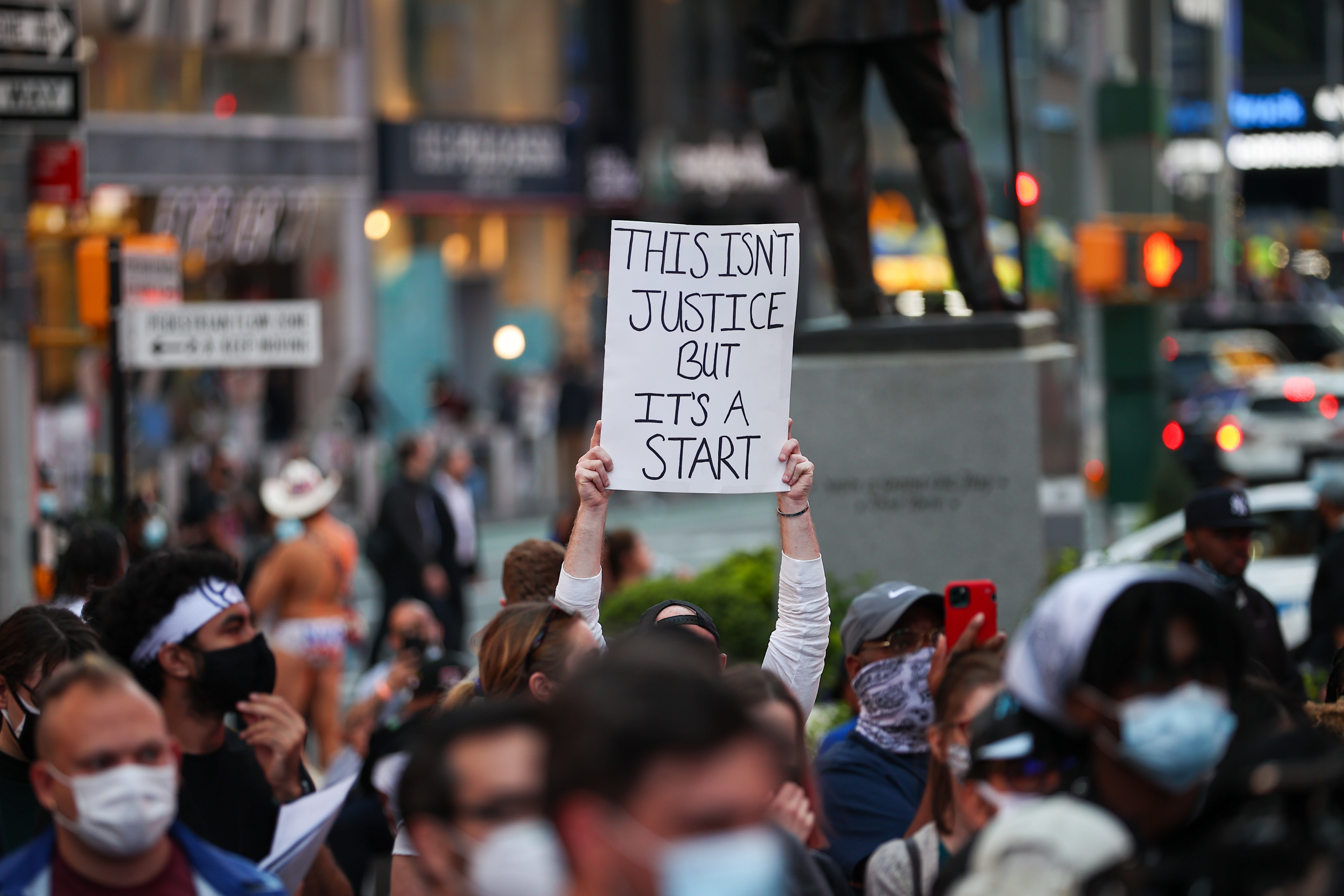 Protesters in New York after the verdict.
Anadolu

Mr Biden said Mr Floyd's death "ripped the blinders off for the whole world to see the systemic racism" in the United States, which he described as a "stain on our nation's soul, the knee on the neck of justice for Black Americans".

"We can't stop here," he said, "in order to deliver real change and reform, we can and we must do more to reduce the likelihood that tragedies like this will ever happen or occur again".

Earlier, Mr Biden and Ms Harris called Mr Floyd's family to share their relief at the verdict and commend their strength.

During the call, Mr Biden told Mr Floyd's daughter, Gianna, that her father changed the world. "Let that be his legacy, a legacy of peace, not violence," he said.

Ms Harris, the first black US Vice President, said she felt a sigh of relief at the verdict but added that there was still work to do to "reform the system".

"A measure of justice isn't the same as equal justice. This verdict brings us a step closer, and the fact is, we still have work to do," she said.

"We are all a part of George Floyd's legacy and our job now is to honour it, and to honour him."

World leaders, past and current, have also responded to the high-profile verdict, including former US President Barack Obama. Mr Obama, the first and only black US president, issued a powerful statement calling for work to continue on combatting systemic racism.

"If we're being honest with ourselves, we know that true justice is about much more than a single verdict in a single trial," he wrote.

"True justice requires that we come to terms with the fact that black Americans are treated differently, every day. It requires us to recognise that millions of our friends, family, and fellow citizens live in fear that their next encounter with law enforcement could be their last."

"That a family had to lose a son, brother and father; that a teenage girl had to film and post a murder, that millions across the country had to organise and march just for George Floyd to be seen and valued is not justice," she said.

"And this verdict is not a substitute for policy change."