Labor senator Katy Gallagher will be referred to the High Court despite insisting she is eligible for parliament.

Labor senator Katy Gallagher has voluntarily agreed to refer her dual citizenship case to the High Court, but insists she is eligible to remain in the parliament.

The ACT senator has also stepped down from her role as the Manager of Opposition Business in the Senate, but will remain in parliament until the High Court makes its decision.

The move comes after days of political pressure from the Turnbull Government, which ramped up when Senator Gallagher’s documents were uploaded to a citizenship register earlier in the week.

The documents show the senator contacted the UK Home Office to renounce her British citizenship, inherited from her father, before the last federal election. But the official response did not come back until after the election, meaning the senator was likely a dual citizen at the time of the poll itself.

“Conscious that the attacks on my legitimacy to sit as a senator will continue to be used by my political opponents, I have formed the view that my situation should be considered by the High Court,” Senator Gallagher said.

“While I do not agree with the need for this referral, I do not resent it,” she told the Senate chamber on Wednesday morning.

Labor is relying on a legal precedent established in a the 1992 High Court case Sykes v Cleary which held politicians who took “reasonable steps” to get rid of their foreign citizenships should not be disqualified. 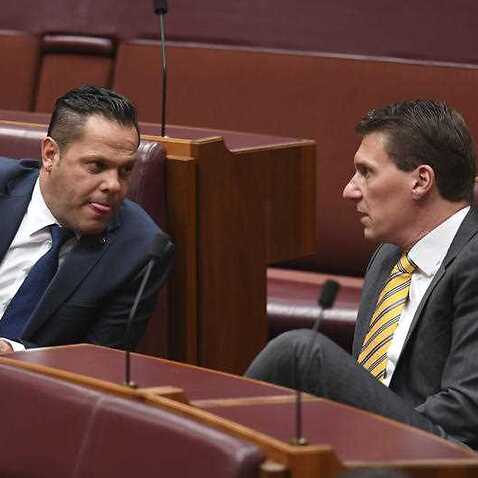 Which senators have declared foreign links in the Citizenship Register?

The Gallagher case will be an important legal test of the “reasonable steps” defence.

Previous High Court hearings, including the one that disqualified Deputy Prime Minister Barnaby Joyce, largely dealt with cases where the politician claimed they had no idea they were dual citizens and took no steps.

Labor's Senate leader Penny Wong said the referral was the "only way" to "bring an end to the attacks" from the government, even though the opposition remained absolutely confident Senator Gallagher would win her case.

Attorney-General George Brandis said the Labor senator had "not done anything wrong" but said the court referral was neccesary.

"The court's reading of section 44i of the Constitution is as clear as it is unforgiving," Senator Brandis said.

Labor has long insisted that its strict legal vetting process for candidates would have picked up any dual citizens.

But the Kay Gallagher case comes as the citizenship spotlight turns to the Lower House, with all federal MPs now adding their documents to the same citizenship register.

The Coalition is threatening to refer four Labor MPs, on top of Senator Gallagher, to the High Court.

Labor, in response, says there are another eight Coalition MPs with questions to answer.