A new threat has emerged for Australia's endangered golden shouldered parrot as Aboriginal land owners and researchers in Cape York fight to secure its future.

Feral animals and mining exploration in the remote region are the latest invaders of the drastically reduced habitat for the last 2000 remaining golden shouldered parrots in the wild.

A conservation effort has renewed an age-old relationship between the Olkola people and the totemic bird after one of Queensland’s biggest land hand-backs two years ago. Known as Alwal to the Olkola, the parrot nests in conical mudded termite mounds and prefers open grasslands.

Habitat restoration with the help of environment charity Bush Heritage, using traditional fire land management and by removing cattle, is being hailed as a form of real reconciliation.

Parrot numbers though are expected to continue to decline, at least in the short term.

“The main reason is because of changed land use over the past 150 years,” said Bush Heritage ecologist Allana Brown, who has been working on Olkola land for the past two years.

“First of all traditional owners were displaced and Aboriginal burning regimes ceased, and then grazing became the dominant land use.”

A millennia-old bond between humans and the bird was broken as Aboriginal people across the Cape were removed or massacred from the mid-1800s onward and their land management ceased. 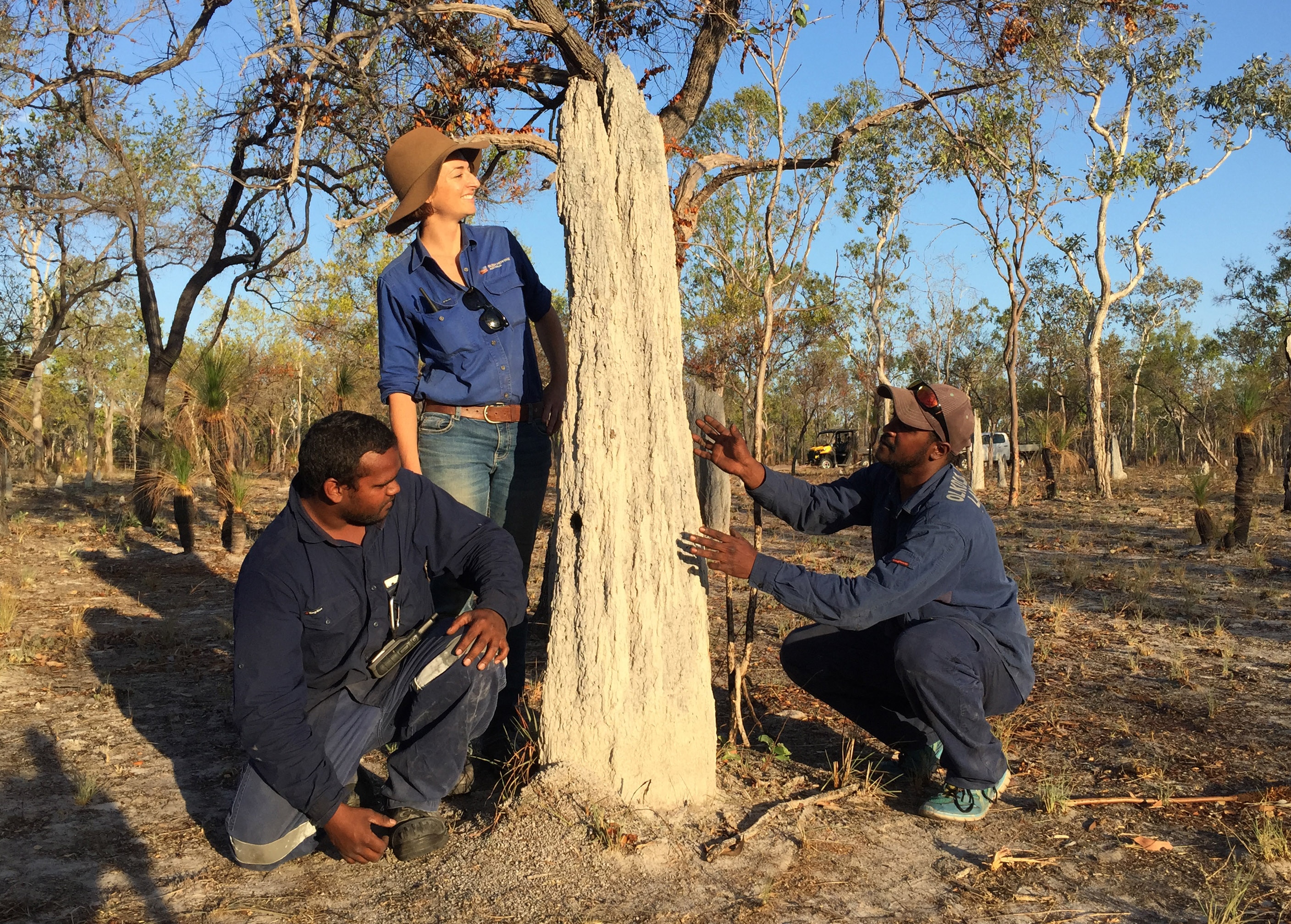 “These little parrots nest in conical termite mounds, they wait until the wet season when they’re nice and soft and spend two weeks digging a nest chamber,” said Ms Brown.

It takes at least 50 years for the ant hills to grow to the right size to support a parrot nest and some mounds are estimated at 200-years-old.

“The male mainly does the work and at the end of two weeks sits back while the female goes in to see if it (the nest) is good enough,” Ms Brown said.

“She lays a clutch of six eggs and they fledge after about six weeks. We estimate about half (the) chicks survive.”

After decades of fighting for their land, 700,000 hectare was returned by the government in 2014 and the Olkola identified saving Alwal as a priority.

“Alwal was created here from the rainbow, the gold and the blue, and came out of the mud,” said Mr Ross, the 2016 Queensland Local Hero in the Australian of the Year awards.

“Alwal never forgot where he came from, he builds his nest in the ant hill right next to the mud. He’s still living in the mud and has his chicks in there.”

The prospect of the ICUN Red Listed parrot disappearing is not an option for the Olkola.

“It’d be like they kill one of us, destroy one of us, if they’re all gone, then they destroyed one of our people,” he said.

The Golden Shouldered Parrot is slightly larger than a budgie. The male has a spectacular display of yellow, turquoise and red while the female is a deep olive green with turquoise.

While flocks were one widespread across the vast expanse of Cape York, its habitat has been reduced to two small populations in remote locations on the Morehead and Staaten Rivers. 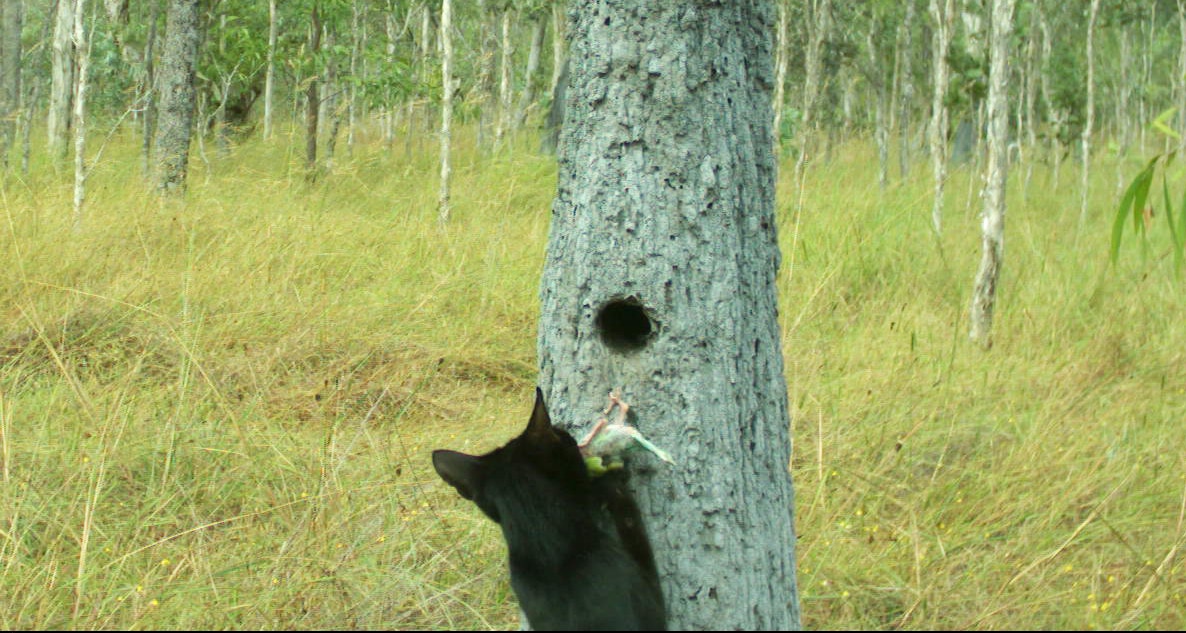 Thousands live in captivity as pets from poaching in the 1950s and 1960s but their reintroduction into the wild is currently considered unviable.

“What’s really special about this project is how Olkola ecological knowledge and cultural knowledge about Alwal and his story has been so deeply integrated into the Western scientific understanding of the bird,” said Ms Brown.

“It’s really wonderful working so closely with Olkola land managers because at first we didn’t know much about Alwal but together we’ve built our knowledge and seeing Olkola come up with their own theories and research questions, that they want to put to the test, it’s been a real privilege.”

Restoring the parrot’s habitat has provided jobs for the Olkola rangers removing cattle, funding through carbon farming with traditional land burning and a fledgling tourism project.

It will cost approximately $750,000 for Bush Heritage and Olkola to implement recovery actions to save the Golden shouldered Parrot over five years.

“It goes deeper than reconciliation, out here that’s the real thing,” said Mr Ross about working with Bush Heritage.

“I see a lot of talk of reconciliation, but that’s there. I believe reconciliation is working together on country and sharing knowledge. That’s when I say it’s fair dinkum.”

“Our knowledge of our country, and their knowledge of the scientific, you can't get any better,” he said, adding they have rediscovered “endless stuff, bora grounds, graves, different species of animals and scar trees”.

Data from the parrot population survey is being collated for a comparative analysis but a startling new threat has emerged.

“What we are seeing so far though is really concerning and we estimate the population estimate will be revised down, there’s a clear trend,” said Ms Brown.

“One of our most important findings we’ve had here in the last two months is clear evidence of predation of Alwal chicks by feral cats. This is a major new implication.”

“Feral cats were not thought to be a threat. Traditional owners had not reported seeing them they weren’t recorded in past research.

“The fact is we now have photos feral cats reaching into the nests and pulling out chicks and the next day returning at the same time to finish the nest off.”

For the veteran Cape York campaigner there is another looming predator creeping towards Olkola land.

“Our biggest threat here now, and it frightens me, is mining. It scares me. It’s coming like a freight train and I don’t know how to stop it,” said Mr Ross.

“I’m not anti-development or anti-mining. I have to say ‘no’ but we haven’t got that right.

“With mining happening so close to Alwal habitat, I don’t know what’s going to happen to that bird.”