SBS News goes behind the scenes as the iconic newsreader presents her last bulletin.

The queen of news. A fashion hero. An Australian icon.

Three decades after Lee Lin Chin first got behind the news desk at SBS, the much-loved presenter was getting ready to deliver her final bulletin on Sunday.

But as fans prepared to gather in Melbourne’s Federation Square to watch her exit on the big screen, it was business as usual for Chin. She started the afternoon, as she always does, at the nearest hot desk in SBS’s Sydney newsroom, reading through the rundown for that evening’s news.

“Are we doing the boxes again tonight?” she asked, a reference to the split-screen technique used in the by-elections coverage the night before.

The conversation moved quickly to the handsomeness, or not, of UK Labour leader Jeremy Corbyn, before a colleague asked about her leaving party: “How will you invite everyone if you’re not on Facebook?”

“It’s a godsend,” Chin replied. She doesn’t own a mobile phone either.

After announcing her resignation on Thursday, Chin said she’d never been accosted by more viewers in the street. “It’s rather strange,” she said.

Many who grew up with Chin being beamed into their lounge rooms have taken to Twitter to say thank you.

She “made me believe that I could be a TV journalist despite being a little Asian kid,” one message read.

Some admitted they only watched the news to see what Chin was wearing: “There will never be another newsreader as stylish”.

Others hoped her irreverent social media presence (aided by writer and manager Chris Leben) would continue: “As long as you don’t resign from Twitter @LeeLinChinSBS all will be good”.

Asked if she had a message for fans on Sunday she told SBS News: “I’m not disappearing from the face of the earth, so if they see me I will have all the time in the world to engage with them … as long as they don’t ask for selfies.” Before heading into hair and make-up, Chin made a private address to staff. She didn’t want a fuss but was “very moved,” she said, before teasing, “you should see what I’m wearing tonight”.

The few who had seen her final ensemble said it was “Thor meets Gladiator”, and “Darth Vader-inspired”.

“She never wears two pieces the same,” one of her hair and make-up artists said. “She’s always styled herself, we just assist”.

The team reminisced about having to dash to Bunnings for rope when Chin chose to wear makeshift suspenders to the 2016 Logies, and the occasions she has been mobbed by fans, “everywhere from Townsville to Hong Kong”.

Colleagues spoke of her set of “amazing handbags” and a 30-piece glasses collection: “She never fails to disappoint”. 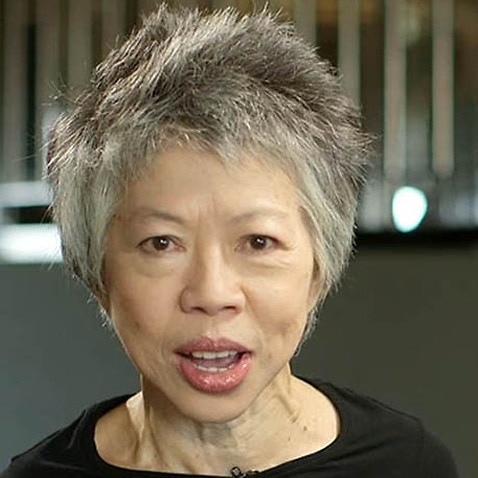 And as Chin prepared to head into the studio, those in the newsroom shared their favourite moments working alongside her. They’ve all been asked “Have you met Lee Lin Chin yet?” while working for SBS.

Chin was behind the desk the day of the September 11 attacks, the Port Arthur massacre, and countless other ‘where were you when that happened?’ days. And it was her arguing for every second of “serious, geopolitical” news that one colleague admired the most.

“She’s not a fan of a furry animal story or a surfing dog,” he said.

“You’re not putting that in the news,” she could often be heard saying – even while on air – always arguing for the stories she believed mattered.

Colleagues recalled her appearances at Eurovision, The Feed’s presenter battle and the time she was caught asking “Who is that handsome …” during a live cross with reporter Dan Rivers.

One staffer revealed she simply loved the way Chin would always use two napkins to eat dinner at her desk – usually a blistering hot Singaporean soup. She’d tuck one napkin into her collar and one on her lap, so she didn’t ruin her outfit.

Others remarked about the time she asked for a beer bottle served in an iced champagne bucket on a social outing.

But on Sunday, fans and colleagues alike wanted to know one thing: what next?

On Sunday, while changing into a black plastic ensemble in wardrobe, she told SBS News with a smile: “I am leaving for happier corners of this insubstantial pageant,” a quote inspired by Shakespeare.

So where would she be next weekend? “I’m going to be in Singapore, in the heat, eating … a lot”.