A British businessman who became known as a "super-spreader" of the COVID-19 coronavirus says he has fully recovered.

A British man who inadvertently spread the novel coronavirus to at least 11 people from three different countries without ever visiting the disease epicentre said on Tuesday he had fully recovered but remained in isolation in a central London hospital.

Businessman Steve Walsh released a statement from hospital after catching the virus on a business trip in Singapore.

Mr Walsh said he contacted Britain's state-run national health service once he realised he might be sick.

“I would like to thank the NHS for their help and care – whilst I have fully recovered, my thoughts are with others who have contracted coronavirus. As soon as I knew I had been exposed to a confirmed case of coronavirus I contacted my GP, NHS 111 and Public Health England," Mr Walsh said. From Singapore to UK via the Alps: How one man spread the deadly coronavirus

He is believed to have infected at least 11 other Britons - five in a ski chalet in the French Alps and another five who have since returned to his home city of Brighton on England's southeast coast.

Another person was diagnosed while on vacation in Spain.

"I was advised to attend an isolated room at hospital, despite showing no symptoms, and subsequently self-isolated at home as instructed," Mr Walsh said.

"When the diagnosis was confirmed I was sent to an isolation unit in hospital, where I remain, and, as a precaution, my family was also asked to isolate themselves." 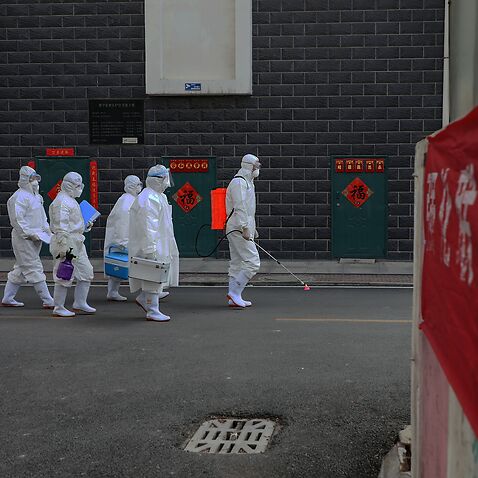 More than 1,000 people have so far died of the virus, all but two in mainland China. Another 43,000 have been infected by the disease across 25 countries.

The World Health Organization's executive director of health emergencies, Mike Ryan, told reporters on Wednesday that talking about the virus through the lens of individuals was "deeply unhelpful".

"I really wish we could refrain from personalising these issues down to individuals who spread disease," Dr Ryan said.

"People are not at fault, they are never at fault in these situations. So let's be extremely careful to not attach unnecessary stigma to this."

Dr Ryan added that this case did not, at this point, show that the virus had shifted or mutated, despite the fact Mr Walsh had not visited China.

Experts have previously said the speed of transmission across the world demonstrated the potential for the virus to be a global pandemic. "The recent report of transmission to British nationals in France are a worrying but perhaps not unexpected development," Paul Hunter, Professor in Medicine at the University of East Anglia, said.

"This reinforces the fact that transmission is no longer restricted to China. It is still too early to know when and if the epidemic will become pandemic and whether we will see start to see sustained person to person transmission in Europe."