2021 Australian Survivor champion and UniSA PhD candidate, Hayley Leakes, is hoping to improve the lives of people living with chronic pain through her research into how the body and mind respond to it.

A routine gym session in late 2019 saw Michael White injure his back. What followed was about nine months of chronic pain that often left him immobile.

“It was fully debilitating … like I couldn’t walk quickly and I couldn’t sit for a very long time and I would be in pain every time I woke up,” Michael told Insight.

“I put on 14kgs, I couldn’t do any of the exercise or anything I used to do after work - before that I was running twice a week and going to the gym four times a week - and then it was from that to instant sedentary which then increased my alcohol consumption.”

Michael, 33, a personal injury and insurance lawyer in Adelaide, struggled to work and would spend two thirds of his day lying down in the sick room.

An MRI performed by a sports doctor revealed he had an extruded disc but no nerve compression. The advice was to take anti-inflammatory medication and just rest.

A requested referral to a neurosurgeon saw him receive a cortisone injection, which Michael said didn’t help, and a discussion about surgery which could be performed as a last resort.

With nothing to lose, Michael contacted a physio who was able to determine through a number of exercises performed in different positions that Michael was suffering from movement pattern disorder, basically chronic pain. While his injury was real, his body had learnt to protect itself by holding his spine very still in a bid to prevent further injury. Essentially his body had learnt to cause this pain to protect itself.

This concept of mind control when it comes to chronic pain is something UniSA PhD candidate and 2021 Australian Survivor champion, Hayley Leake, recently delved into.

“Chronic pain is experienced by one in five Australians, and when pain persists, it can disrupt every aspect of life – including school or work, social and family connections, and physical and mental health,” Ms Leake said.

“Modern pain science suggests that pain is a protective output from the brain in response to threat. Threat may take many forms, not just what’s happening in your body, but also your thoughts, emotions and context.” 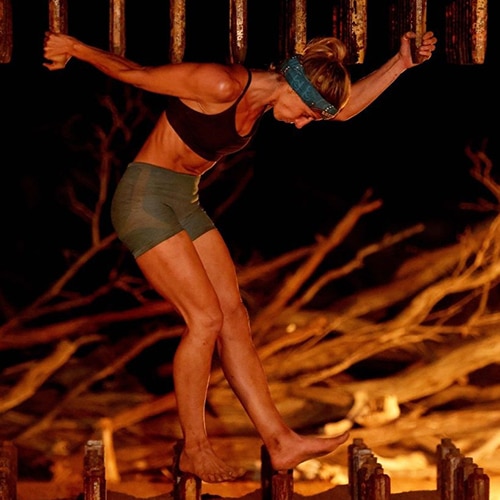 In the final challenge on Survivor, Hayley Leaks stood on narrow pegs for almost five and a half hours.
Australia Survivor

“By reframing knowledge of pain, I’m hopeful that we can make a positive difference to the lives of people challenged by chronic pain,” she said.

After eight weeks of conditioning training with the physio, Michael said he was pretty much symptom free. While he does still suffer from some mild pain he said it’s no longer debilitating and he’s been able to return to all of his normal exercises. He considers himself lucky to have found a practitioner who was able to help him and educate him on his body's response to pain.

“It’s given me a hell of a lot more empathy for people with chronic pain … I’m now very much more of the opinion that medical imagery is only part of the story, it showed I had a really, really bad disc rupture but it wasn’t the rupture that was causing the pain, it was my body’s learned protective mechanisms.”