Sam, a mum of two, was preparing to run a half marathon, feeling the fittest of her life when she suddenly had a stoke. She details her journey to get better and get her life back.

In March 2019, I was at my fittest preparing to run my first half marathon at the end of the month. I was 29-years-old and a mother of two young children, aged one and three. Life was great but I had no idea what was around the corner.

Sunday March 3rd was the day my life changed forever. I was at home alone with my two children when I unintentionally dropped my phone, quite forcefully, on the kitchen bench. The screen went black. Instantly, my heart rate increased, and I felt an intense headache on my left side as I tried to remember the last time my phone had been backed up. Thankfully, my phone turned back on and as I walked away from the bench to take some paracetamol to help with the pain, I noticed that my right foot/leg felt tingling, like pins and needles. I knew something wasn’t right, so I sat down on the kitchen floor with my three-year-old son. Quickly I realised that I couldn’t feel or move my right leg.

After several unsuccessful phone calls to my husband I finally got through to my dad and after explaining the situation my parents instantly made their way to my house. As I waited for my parents to arrive, I was in two minds. Part of me thought I was overacting, and I would probably feel ‘normal’ again at any time and the other part of me was scared wondering what the hell was going on and would I be able to walk again. My parents called an ambulance as soon as they saw me. It wasn’t until one of the paramedics tested the sensation down the right side of my body that I realised the tingly sensation wasn’t isolated to my leg, it had spread from my toes to my ear. 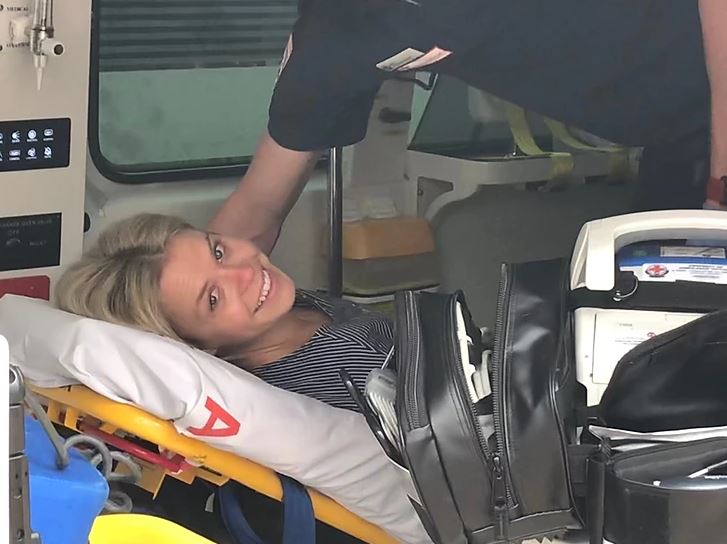 This photo was taken 30 minutes post stroke in the ambulance - Sam had no idea what had actually happened to her at this point.

I was taken to the Austin Hospital in Melbourne where a CT scan found evidence of bleeding on my brain as a result of an arteriovenous malformation (AVM). An AVM is essentially a birth defect where there is an abnormal connection between arteries and veins that can go unnoticed, or in some circumstances, can rupture causing bleeding on the brain. My husband and I were met by the stroke team who explained I would require surgery and would be in hospital for two and a half weeks. We looked at each other in disbelief and I burst into tears. I was fit and healthy at age 29, how could I have possibly had a stroke!

I spent the next 10 days in the Austin Hospital allowing time for the swelling on my brain to decrease in preparation for surgery to remove the AVM. This was an extremely emotional time as I processed the prognosis of the surgery and the risks involved, which included the chance of another stroke on the operating table, permanent weakness, numbness and/or tingling on one side of my body, speech and visual problems and the chance of paralysis. On a positive note once an AVM is surgically removed it does not grow back and the risk of further bleeding is eliminated.

The procedure that was performed was a craniotomy, basically they opened my skull, so a section of my hair was shaved on the left-hand side. The surgeons then cut out the AVM from the surrounding brain and placed my skull back in place with metal plates and 25 staples. I spent roughly 40 hours in the ICU ward to monitor my blood pressure and I was eventually moved back to the ward where I stayed for another six nights.

I was in hospital for a total of 15 days and during this time I only saw my children twice. Together my husband and I had decided it was best to limit their visitation as the experience of seeing their mum in hospital was very traumatic. I missed milestone moments of my daughter’s development including sitting up unassisted and crawling for the first time, precious one-off moments that I will never get again. Our five-year wedding anniversary was another milestone we celebrated while I was in hospital. We had to cancel a reservation at a beautiful winery we had made previously in exchange for KFC in my hospital ward. In all honesty we didn’t care how or where we were celebrating, we were grateful to be celebrating at all. 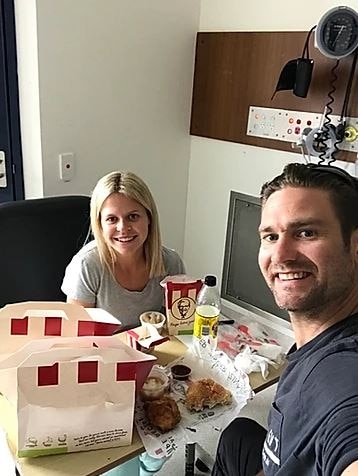 Sam and her husband enjoying their 5 year anniversary in hospital.
Supplied

After numerous MRI scans, angiograms, CT scans, EEG scans and assessments from physiotherapy, occupational therapy and the epilepsy team I was eventually able to return home with my family. I’ll never forget the first glimpse I caught of myself in the mirror that night. I had lost seven kilos; my arms and hands were covered in bruises from the multiple cannulas that had been inserted and the daily blood tests. I had a dark bruise from an angiogram around my groin and of course my shaved head. Who was this person I was looking at? My appearance was a true reflection of the journey I had been on but not the person I had become.

On 5th April, my 30th birthday, I started my out-patient physiotherapy program. Walking into the gym at the rehabilitation centre was certainly a moment that bought the reality of what I had been through and what the future would entail to light. There was absolutely no certainty if I would come close to making a full recovery which was terrifying.

I have always struggled to find the words to explain the sensation I felt in my leg/ankle/foot. It felt heavy, numb and constantly like I had pins and needles running down my leg. When laying down I didn’t have the ability to raise my leg off the ground without physically picking my leg up using my hands and if I let go my leg would fall straight to the ground. My mission was to retrain my brain to be able to control the movements of my right side of my body. After only five months of weekly physiotherapy sessions and dedication to incorporating physiotherapy exercises into my daily routine, I was discharged from my outpatient physiotherapy program. Sam was ecstatic with her first run after the stroke.
Supplied

There has not been a day go by since having the stroke that I haven’t been reminded of the trauma. For example I can only drive barefoot confidently as footwear interferes with the sensation in my right foot. On an extremely positive note I have rebuilt my strength, fitness, coordination and control to a level where I have successfully run 10km nine and a half months after surgery.

Admittedly, I had always associated stroke with the elderly or overweight. From sharing my story, I hope to increase the awareness of stroke and the diverse range of people it affects. According to the Stroke Foundation, stroke is one of Australia’s biggest killers and leading cause of disability. Be aware of the signs, think F.A.S.T and act FAST.

Face – check their face, has it drooped?

Arms – can they lift both arms?

Speech – is their speech slurred?

Time – is critical. If any of these signs are present call emergency services immediately.

The 'hidden disability' that changed this little girl's personality overnight