Recreational drug users and experts take us to the heart of the pill testing debate about whether attitudes can change and lives can be saved.

Watch the full story on Insight, tonight 8:30 on SBS and On Demand.

Five drug-related deaths at festivals this summer have renewed debate about whether to introduce pill testing services.

At present no state government, except the ACT, supports the idea of pill testing.

To date there has only been one trial of pill testing in Australia at last year’s Groovin the Moo festival in Canberra.

*Don, who uses recreational drugs, was one of the punters who had his MDMA pills tested at the festival.

"The process was pretty good, I always felt safe throughout the experience … I got a white notification that said there was MDMA in the pill," *Don told Insight.

Overall the Groovin the Moo festival tested 85 substances and found almost half of them were not what patrons expected, and two contained highly toxic chemicals. Five people disposed of dubious substances, while another 10 to 20 per cent considered it.

"They [pill testers] were advising me against taking it basically, they were pretty much saying if you don’t want to be sick the best way to do that is to not take anything thing," *Don said.

"After I had it tested, I collected it back and took it on later in the night."

In 2016, one in eight Australians reported using an illegal substance in the past 12 months, with the most popular being cannabis, cocaine and ecstasy.

"I prefer the effects of pills over alcohol, I feel more free, coherent," Jack told Insight.

"The reward of having a great time being in a community outweighs the risk," another guest told Jenny Brockie.

For others, drug use was a way of escaping. 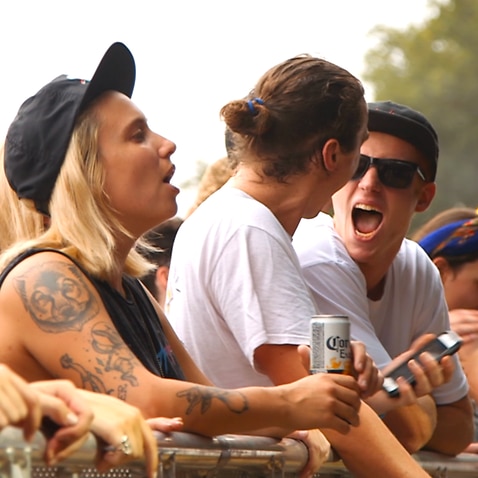 "I was going out almost every single weekend for three years and I would be taking a lot of MDMA every weekend," Ben said.

"It was the feeling of escaping ... I felt like I had to escape my terrible life so to speak and I'd just go out and feel this huge rush of euphoria and it just became so addictive."

So could pill testing make people like Jack and *Don safer?

"I would use it because I don’t know whats in the drugs but my one problem is that I get anxious lining up and the police are nearby," Jack said.

"Absolutely … I think it should be legalized," Nick said.