What happens when you’re the lone survivor of a tragic incident? Insight finds out what causes survivor's guilt and if it’s universal.

When you are the lone survivor of a tragedy, how does it shape your life and how do you move on? Watch Insight's episode, Lone Survivor, on SBS on Tuesday, October 25 at 8:30pm or later on SBS On Demand here.

“For a long time, I did not cope very well at all,” Beau Wise told Insight SBS.

“I dealt with everything in the wrong way. I shut out my family, really Marines were about the only people I could talk to, or my brothers’ guys, the Green Berets or the SEALS, and those were the guys I wanted to connect with.

“And I shut my wife out, I shut my sister [out], my parents and you know, anything that made me connect on an emotional level, I was not having it.”

Beau suffered from what is known as survivor’s guilt. His two older brothers, Jeremy and Ben, were killed in Afghanistan – Jeremy a Navy SEAL and Ben a Green Beret.

Beau also served in Afghanistan in the Marine Corps. He was the only brother to return home. Beau Wise at the graves of his two brothers
Supplied

“I’d play all the scenarios of ‘why me?’ And it revolves around why the fathers at the time, Jeremy and Ben, were killed,” he said.

“I didn’t have children and they did and so that’s one of those things in my head that I’ve wrestled with – why did the fathers leave?

“At one point in time I didn’t want to admit that I had survivor’s guilt … I think if I confessed that I did have it, it would have meant that I would have to talk to someone and that was the last thing I wanted to do, in the wake of the catastrophic events.”

Professor Richard Bryant is a clinical psychologist based at the University of NSW. He specialises in trauma. He explained to Insight that survivor’s guilt can be caused when our views of the world are challenged.

“Probably the main reason is that what underpins survivor guilt is that we do often have a sense that the world is just or it’s fair, and the fact that I have survived and somebody else hasn’t, challenges that,” he said.

“In fact, life is not fair - many, many traumas happen totally randomly or the person who does survive has actually had no control over the events that led to other people dying.” The Wise brothers. From left to right - Jeremy, Ben, and Beau.
Supplied

However, Professor Bryant explained that survivor’s guilt doesn’t affect everyone.

“…it varies, there's not one kind of guilt, everybody has a different experience … so the sort of guilt that people might have, it might not exist at all, or it can be very, very strong.”

Annette Herfkens was the lone survivor of a 1992 plane crash in Vietnam that killed 30 other people, including her fiancé Willem “Pasje” van de Pas.

"It was very lonely I'd have to say being a lone survivor, especially from an aeroplane crash, because it's a very small club.... " she told Insight's Kumi Taguchi.

She said she felt a great sadness and grief after the death of Pasje, but said there was almost an expectation for her to feel survivor's guilt. Those feelings never came. 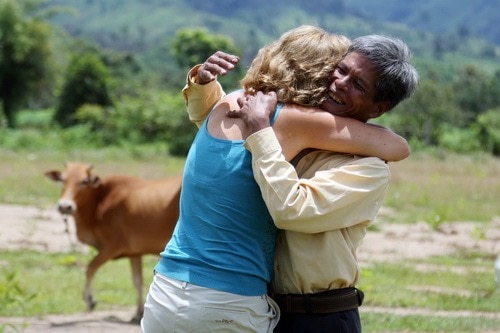 Annette Herfkens meeting one of her rescuers when she returned to Vietnam.
Supplied

"I got so much attention from the press and from everyone, that [survivor's guilt] was almost put on me,” she said.

“I don’t necessarily think I got the better part of the deal because he [Pasje] went to a beautiful place and I had to face life alone.

"Everyone was very much focusing on the way that I had survived and how Pasje had died, but for me I was not focusing on that at all.

“I was just an average widow, like so many widows in the world, and I'm sure I felt just what they felt.

“I felt bitter, went through all the stages of grieving - anger, it was bitter grief.

“I mean my future, I lost my future and that was basically the only thing that counted, was getting on without him."