A report released today, has captured for the first ever how much we’re spending on education at all levels – from early childhood to higher education – and from all funding sources.

Preview above: how do you turn a school around? Full episode on SBS On Demand.

Australia spent A$111.8 billion on education in 2015, the most recent year for which the full dataset for all levels of education spending is available. A report from the Australian Council for Educational Research (ACER) released today shows this was an increase of nearly 80 per cent from 2000 spending.

The federal government contributed A$47.2 billion (42 per cent) of the overall funding. State, territory and local governments spent A$39.1 billion (35 per cent). A further A$25.5 billion (23 per cent) came from private sources.

The report also organises spending by education sector and levels, as defined in Australia.

Education funding goes through a range of transfers between the three sources. At different points in the funding cycle, the contributions by government sources are transferred to other funding sources.

For instance, the federal government transferred A$14 billion of its initial education funding to private sources in 2015, mainly in the form of student loans. It transferred a further A$17.7 billion to state, territory and local governments which then fund schools and other areas of education. 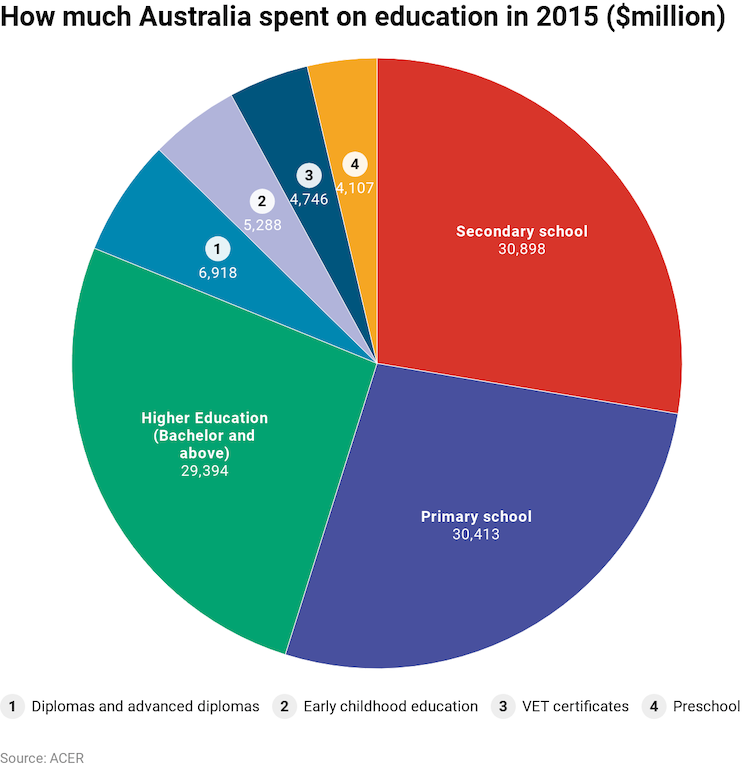 Spending as a percentage of GDP

In 2015, Australia spent A$102.4 billion on primary school and above. In real terms this spending has grown substantially since the beginning of the century and faster than student numbers.

This increase has largely been driven by private sources of funding, rather than government funds, indicating an increasing willingness by people to invest in their own (or their children’s) education.

The share of private spending on education (primary and above) after transfers increased from 26 per cent of total education spending in 2000 to 34 per cent in 2015.

The fastest period of growth in private spending has been since 2012. This coincided with the introduction of the higher education sector’s demand-driven funding arrangements (where universities didn’t have a cap on the number of bachelor degree students they could take).

But it’s important to remember the government allocates a significant amount of its initial funding (before transfers) to student loans.

Spending as a percentage of total government spending

ACER’s analysis is drawn from annual expenditure data the Australian Government Department of Education submits for the joint UNESCO Institute for Statistics, OECD and Eurostat (UOE) data collection on education statistics – which the OECD releases as the Education at a Glance publication.

The Education at a Glance reports are good for obtaining a snapshot of Australian education spending in relation to other OECD countries. But until now the data have not been organised in a useful way for further examining the Australian context.

To fully appreciate the nuances of the data, we need increased expertise in the economics of education in Australia. More emphasis on this would enable long-term forecasting of the policy implications of Australia’s investment in education and would offer an additional objective voice at the education policy table.