The coronavirus pandemic has changed the way we grieve. Many of us rely on rituals and ceremonies during a time of loss, and when this is not possible, nor spending time with family and friends, how do we cope with our grief?

I look like a patient, ready for surgery. I have no earrings, no make-up and my hair tied up in a tight bun – a habit born of years of tucking it under a theatre hat. My eyes are empty as I stare into the mirror in my bathroom. I want to cry but I can’t.

Ask any healthcare worker. It is hard to cry for your own grief. We get automated to generate empathy, kindness and compassion for others. We tap in to those emotions readily when we are dealing with patients and their problems. It is easier to cry with them, for them. Reverse the role and we become dispassionate and look down upon our own emotions. The undeclared pact of resilience and stoicism one signs up for, as a healthcare worker, does not include being kind to oneself. We get used to dealing with our grief in slow doses like a sustained-release tablet.

At such times we rely on talking to our colleagues and friends amidst rituals and ceremonies. I did not realise though how much I relied on those interactions until COVID-19.

It was Good Friday and a quiet day. My mum called to inform me that a grandfather in my extended family had passed away in India. He was someone who had always addressed me affectionately, with his own version of my pet name. He had been sick for a while. Even before I could grasp the news, my mum mentioned that my dad had left the house to pay his respects.

My veneer of composure collapsed. I called my dad in Indore and screamed at him. I told him to go home immediately. He texted me as soon as he reached home. Indore is where I grew up in India. It is a place that was awarded cleanest city for four consecutive years. A place that has a growing number of COVID-19 cases.

It was not him I was screaming at. I screamed at my own helplessness.

I hadn’t screamed at my parents in a while. Today was different. My mind could trace every movement that my dad would have made to reach my relative’s place. It was not him I was screaming at. I screamed at my own helplessness. What if my elderly dad caught COVID-19? What if he passed it on to my diabetic mum? I screamed at the thought of them lying sick in a hospital with tubes all around and me not being able to reach them.

Then, as the day dragged on, I heard another piece of news. A close friend, who is like an elder brother to me, told me that his dad had died in Sydney due to complications arising from Parkinson’s disease. This friend was my first Indian contact when I came to Australia and we had always treated each other like family. How do I comfort this friend who was there to comfort me when this country had seemed so alien 13 years ago? I would have boarded the first flight to Sydney but now I can’t.

I can understand why my parents made that decision for my dad to step out amidst strict lockdown. Aren’t we supposed to look after each other, comfort each other in times of sadness?

As I was trying to gather my thoughts around the two pieces of news, I got a text. It was Easter Saturday and one of my colleagues, a former trainee, had died suddenly of cardiac arrest. A beautiful kind person who had touched the life of everyone around him was taken away in a flash.

The sun was peeping through the window in my bathroom, striking my reflection in the mirror. I wanted to cry then – a big cry. But I couldn’t. I called the friend who had texted me the news. We barely spoke.

You rely on the norms of the society to carry you through. We would have got some closure if we had a chance to attend this colleague’s funeral service or memorial in person. We would have shared our tales of this beautiful person who had left us too early. In a slow sustained manner, we would have been able to deal with that grief. But COVID-19 has made that impossible.

It has made it impossible for the thirteen days of Hindu rituals my parents would have attended to help grieve my cousin grandfather’s death. Under normal circumstances it would have involved a wake followed by the fire cremation citing religious chants, and then various ceremonies on consecutive odd numbered days till the 13th day. Close friends and relatives who attend those ceremonies are a great source of comfort to the family of the deceased. But that is not possible amidst COVID 19. Nothing is normal anymore. 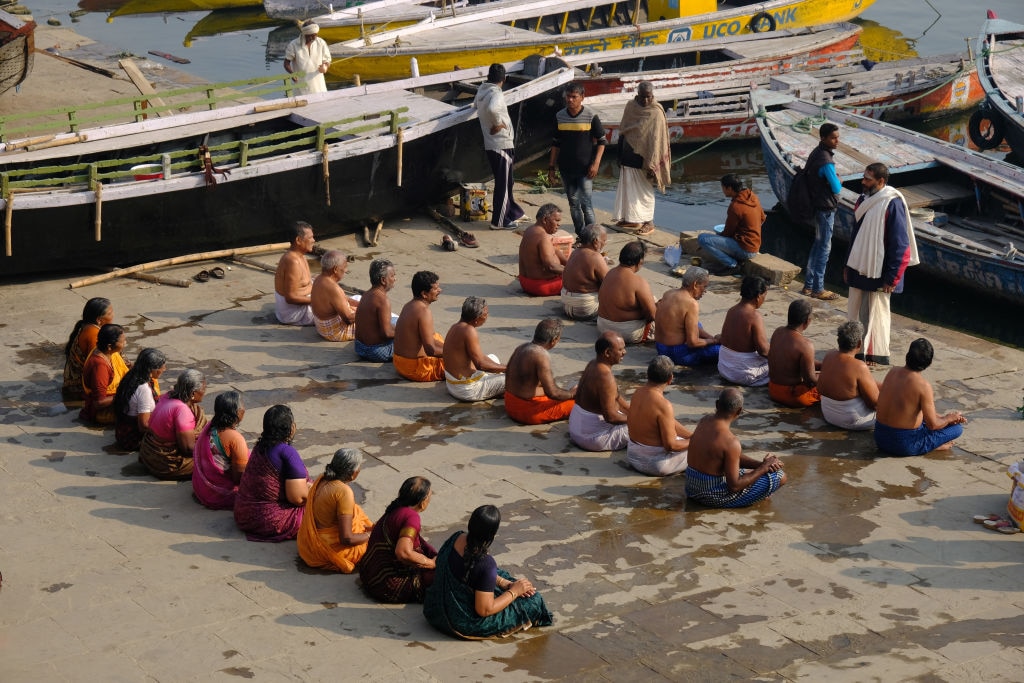 Hindu men and women sitting in small rows attend a religious ceremony for their deceased parents performed by a priest by the Ganga (Ganges) River banks.
Kaveh Kazemi/Getty Images Europe

Social distancing and restrictions have made it impossible for me to comfort my friend in a foreign land at a time when he could have done with the presence of a familiar face in his adopted country. He would have to cremate his father alone and live stream the service.

It struck me that this virus has not only taken away our ability to share joy and happiness but has also snatched away the chance to share grief.

I have often questioned the value or necessity of social interactions. I have also questioned the rigorous rituals that seem to take over my parents’ world in the name of festivities and death.

But as I share my grief with a few others over phone and social media, I realise that the value of rituals and ceremonies goes beyond societal affirmation. They offer a sense of closure and a way to move forward. Grieving in isolation has reinstated my lost faith in human connections and cultural traditions that seem to hold us together in times of sadness and joy.

To be able to live and let others live, we will have to learn to be happy and be sad alone, at least for now. The rituals and celebrations will have to take a rain check.

Krati Garg is a freelance journalist and Oral Surgeon.

Coronavirus: Why this double lung transplant recipient wants you to stay home