Animals, specifically those who live in our homes, are at risk in ways not currently considered in national policy responses.

In a few short months the COVID-19 pandemic has precipitated a series of dramatic social, political and environmental changes. Yet the focus remains resolutely on humans, leaving animals largely out of the picture.

While it was first presumed animals constituted a risk vector for COVID-19, the World Health Organisation states “there is no evidence that a dog, cat or any pet can transmit COVID-19”.

But animals, specifically those who live in our homes, remain at risk in ways not currently considered in national policy responses. This includes the risks of abandonment, opportunistic adoption and poor outcomes post-pandemic, and domestic violence.

What’s more, public conversation hasn’t been directed to emergency plans for “pets” and shelters – and it needs to be.

More than 60 per cent of Australian households include an animal, with more than 29 million pets in the country. This doesn’t include the thousands of surrendered or abandoned animals languishing in animal shelters. 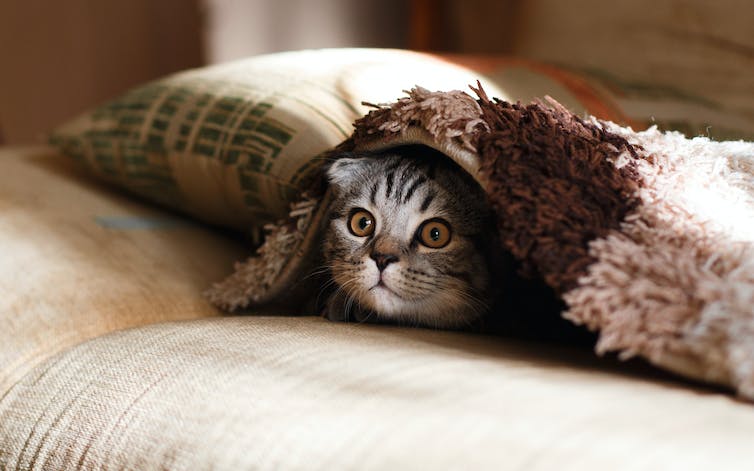 Is adopting a pet during the pandemic an impulse decision? Mikhail Vasilyev/Unsplash, CC BY

Considering animals can provide a raft of benefits for humans, including relieving anxiety and loneliness, it’s no wonder many people isolating at home are deciding to adopt a furry companion.

If you can commit to the care and well-being of animals in the long term, please consider adopting. If you want to care for animals but cannot commit to their care after the pandemic, look into fostering pets instead.

Only adopt if you’re prepared to commit

Opportunistic adoption during this pandemic comes with risks. When people return to the office after working from home, animals may feel abandoned, experience separation anxiety and begin to exhibit destructive behaviour.

People who have adopted animals only for the duration of the pandemic will likely return animals to shelters when they get back to work – another possible point of animal distress.

People may also adopt animals, only to realise after the pandemic they can no longer care for them. This echoes high abandonment rates seen after festive periods, when dogs and cats are often given as gifts.

In fact, some animal shelters such as the Canberra Street Cat Alliance say they’re screening adoptive families more closely to make sure the prospective owners recognise owning a pet is a lifelong emotional and financial commitment, rather than an impulse decision.

And importantly, we may see a spike in pet abandonment if the pandemic leads to a recession. This is particularly worrying for senior animals who may be relinquished due to increased costs in their care.

Pets at risk of domestic violence

Throughout the pandemic domestic violence rates have skyrocketed around the world as people in abusive households are shut in. In response, the federal government has announced increased funding for domestic violence services.

But animals are often left out of these conversations on domestic violence, despite often being victims themselves. A 2008 Victorian study found 53 per cent of women who entered a shelter to escape from domestic violence said their pets had also been harmed.

And in Victoria’s 2016 Royal Commission into Family Violence report, several victims described seeing perpetrators abuse and harm their pets, often as a weapon wielded against the human.

Studies have shown between 18-65 per cent of domestic violence victims delay or refuse to leave abusive situations if they can’t take their pets with them, citing shared love and loyalty, as well as the human victims’ (well founded) fears of what will happen to their animals if they’re left with domestic abusers.

What needs to change

We need short and long-term responses. Right now, we need a public health campaign regarding proper treatment of pets during social distancing and illness. 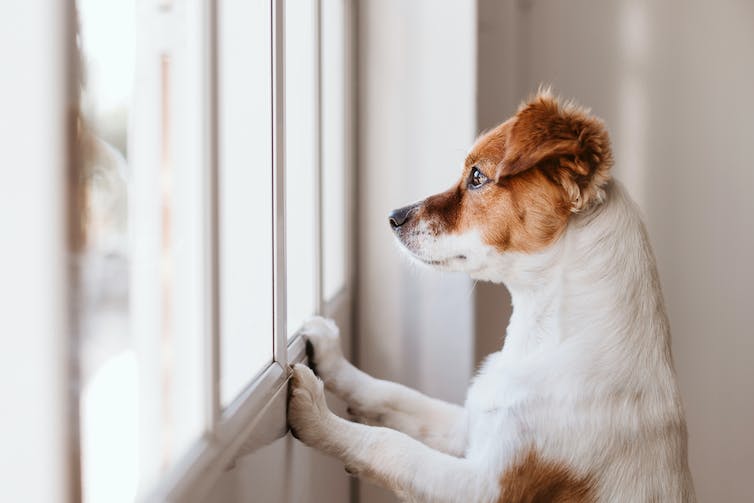 A recession will see a spike in pet abandonment. Shutterstock

Such a campaign would include clear, conclusive information about the transmission of coronavirus via pets. It would also include advice on how to exercise animals during the pandemic. And it would emphasise that like humans, animals need routine and structure when they’re shut in.

We bring animals into our homes and make them reliant on us, so we need to make plans for their care if we get sick or go to the hospital. This may include substitute or back-up carers, or provisions in wills, in the event of death.

Animals shelters, rescue networks and animal sanctuaries also need an injection of funds to help animals avoid the problems of neglect lockdowns can lead to.

Post-pandemic, we need to consider how animals can be included in more policy, perhaps drawing from the work done on including animals in disaster planning in Aotearoa, New Zealand after the 2010 earthquakes.

This work suggested disaster planning should involve supporting people to have proactive plans in place for the well-being of animals, rather than reacting to a crisis.

With most of us are at home, now is the time to reflect on the treatment of animals, whether we have the capacity to adopt, and what contingency plans are in place.

Do you have a pet that's helping you cope during these COVID-19 restrictions? If you have a story to share please email mystory@sbs.com.au

Damien Riggs receives funding from the Australian Research Council as part of a Future Fellowship.

Incredible photos of love and loss inside a vet clinic

How your mental health can affect your dog