It comes as Israel Prime Minister Benjamin Netanyahu says the country will continue to strike in Gaza for “as long as necessary”.

One strike on a three-storey building in the Shati refugee camp killed 10 members of an extended family - two mothers and their four children each. Israel's army said the building was used by senior Hamas officials. 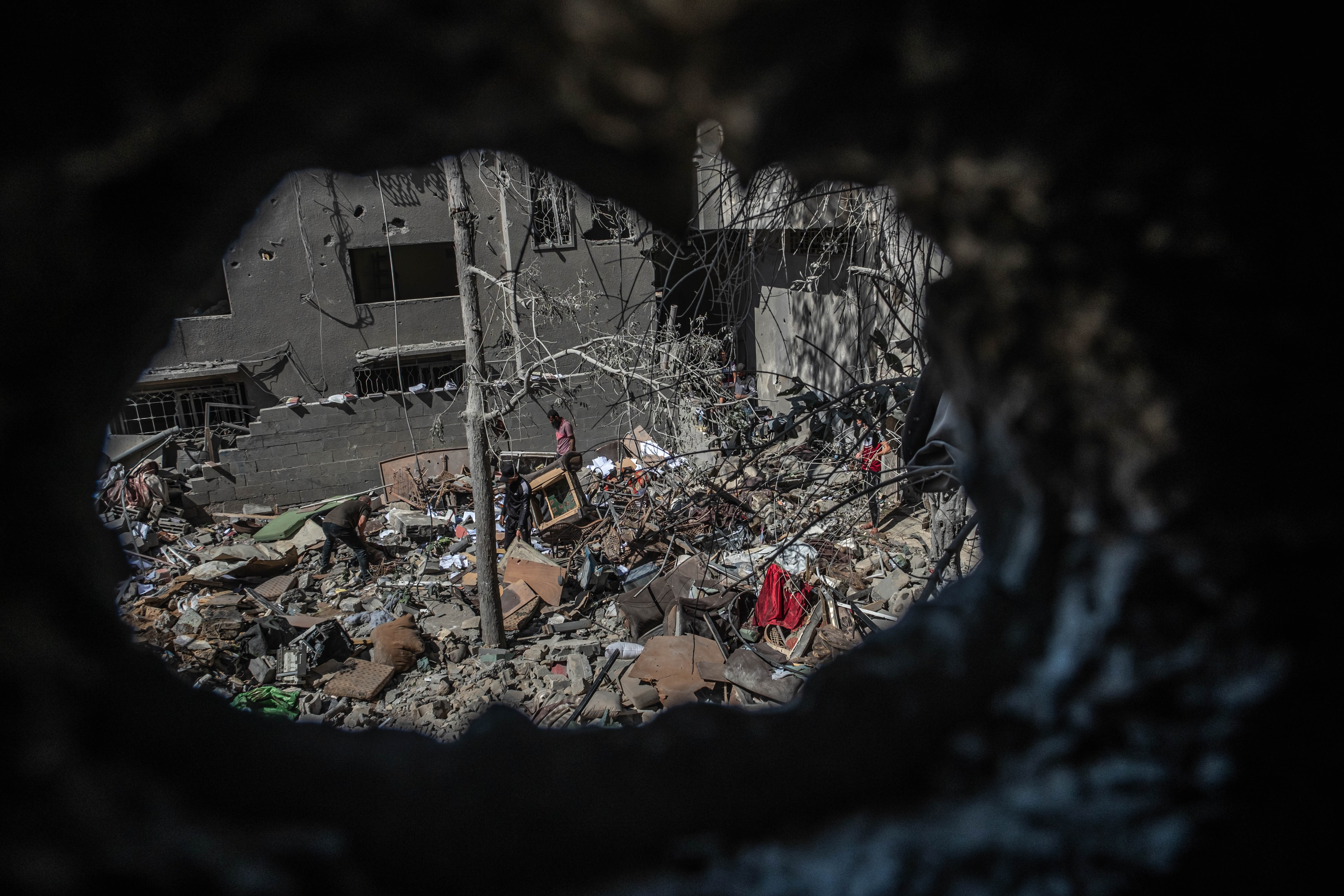 Palestinians inspect a family house at al-Shati Refugee Camp, west of Gaza City, after it was struck in an Israeli air strike on 15 May, 2021.
Getty Images

Mohammed al-Hadidi said he had lost most of his family in the strike.

"What did they do to deserve this? We're civilians," said the devastated father, whose five-month-old baby was also wounded in the explosion.

Palestinian militants responded with volleys of rockets into Israel, killing a man near Tel Aviv.

Balls of flame thrust into the sky on Saturday afternoon as Israel's air force flattened a 13-floor Gaza building housing Qatar-based Al Jazeera and the Associated Press news agency, after giving a warning to evacuate.

"It is clear that those who are waging this war do not only want to spread destruction and death in Gaza, but also to silence media that are witnessing, documenting and reporting the truth," Al Jazeera's Jerusalem bureau chief, Walid al-Omari, told AFP.

AP president and chief executive Gary Pruitt said he was "shocked and horrified" by the attack, and called on the Israeli government to provide evidence for their claim that Hamas military intelligence assets were in the same building.

"This is something we actively check to the best of our ability. We would never knowingly put our journalists at risk."

Israel Prime Minister Benjamin Netanyahu said on Saturday the country would continue to strike in Gaza for "as long as necessary" and do its utmost to avoid civilian casualties.

"The party that bears the guilt for this confrontation is not us, it's those attacking us," Mr Netanyahu said in a televised speech. 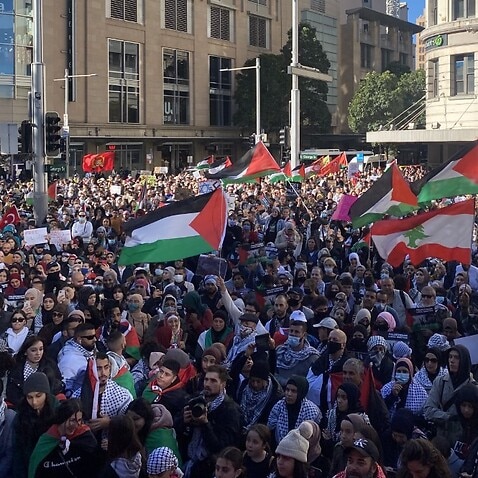 US President Joe Biden in a phone call with Mr Netanyahu, expressed his "grave concern" over the flareup of violence as well as for the safety of journalists.

Mr Netanyahu told Mr Biden that Israel did its utmost to safeguard civilians in its Gaza bombing campaign.

"The proof is that towers containing terror sites are cleared of uninvolved people prior to being attacked," he said.

In his televised speech, he thanked Mr Biden for "unequivocal support", after the US president had again underscored Israel's right to defend itself.

Jawad Mehdi, the owner of the Jala Tower, said an Israeli intelligence officer had told him he had just an hour to evacuate the building.

Israel claimed that "military intelligence" agents of Hamas, the Gaza Strip's Islamist rulers, were also in the building. 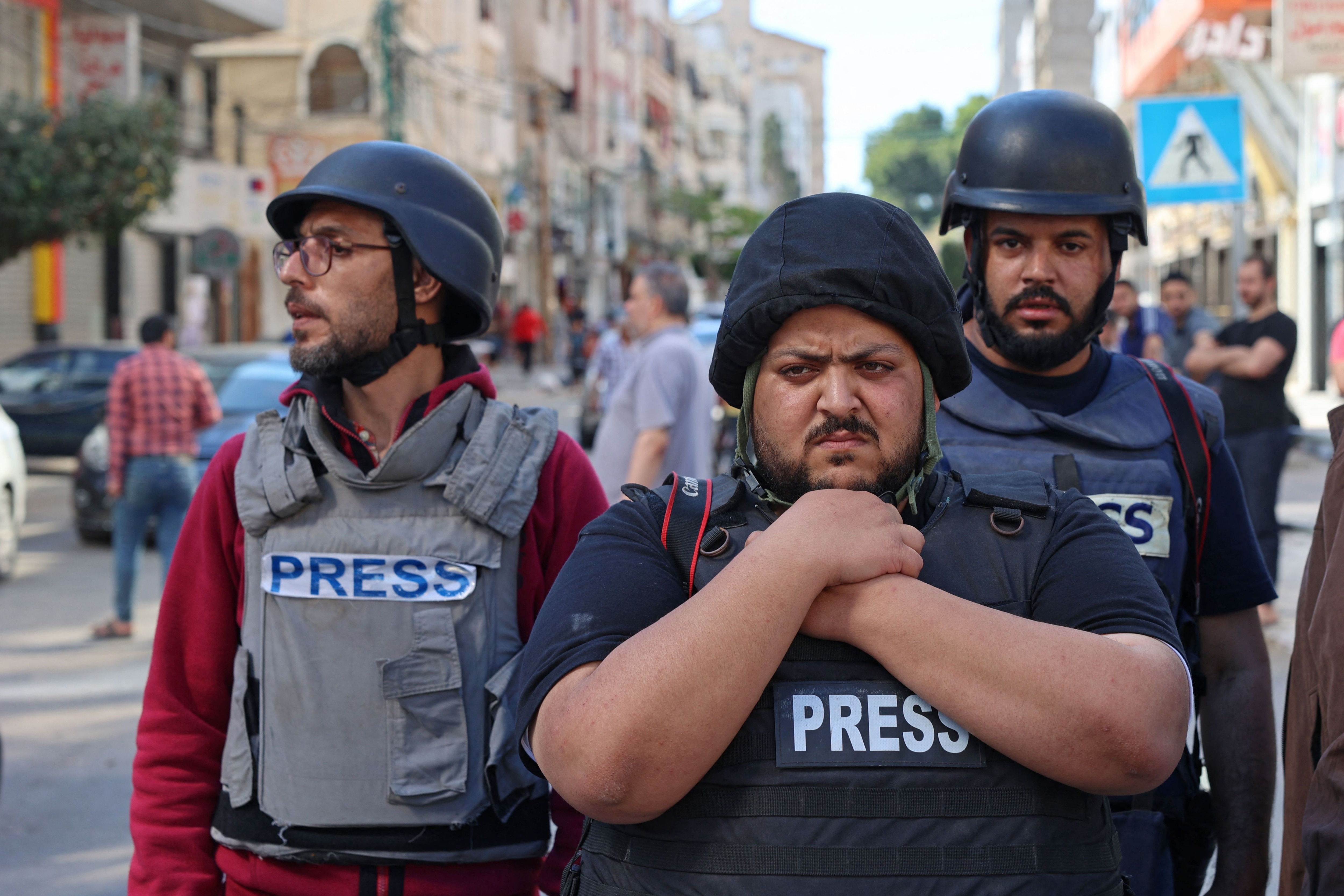 Palestinian journalists stand in shock following the destruction of Jala Tower by an Israeli airstrike in the Gaza Strip on 15 May, 2021.
AFP

Late Saturday, another building of around a dozen floors, the Al-Andalus, was heavily damaged in Gaza City, AFP correspondents said.

At midnight, Hamas launched a fresh barrage of rockets at Israeli cities, including the commercial capital Tel Aviv.

The White House earlier said it had told the Israelis that "the safety and security of journalists and independent media is a paramount responsibility".

Smoke rising from what was the building housing our @AP office in #Gaza moments after Israeli jets destroyed it. I and my colleagues evacuated safely, leaving behind our best memories. Thank you for all your wishes. I’m sorry I can’t respond to inquiries now as we are overwhelmed pic.twitter.com/5ccRQggckD

AFP Chairman Fabrice Fries said the agency "stands in solidarity with all the media whose offices were destroyed in Gaza".

"All parties involved in the conflict need to respect the media's freedom to report on events," he said.

AFP's global news director Phil Chetwynd said: "We are profoundly shocked the offices of media organisations would be targeted in this way." 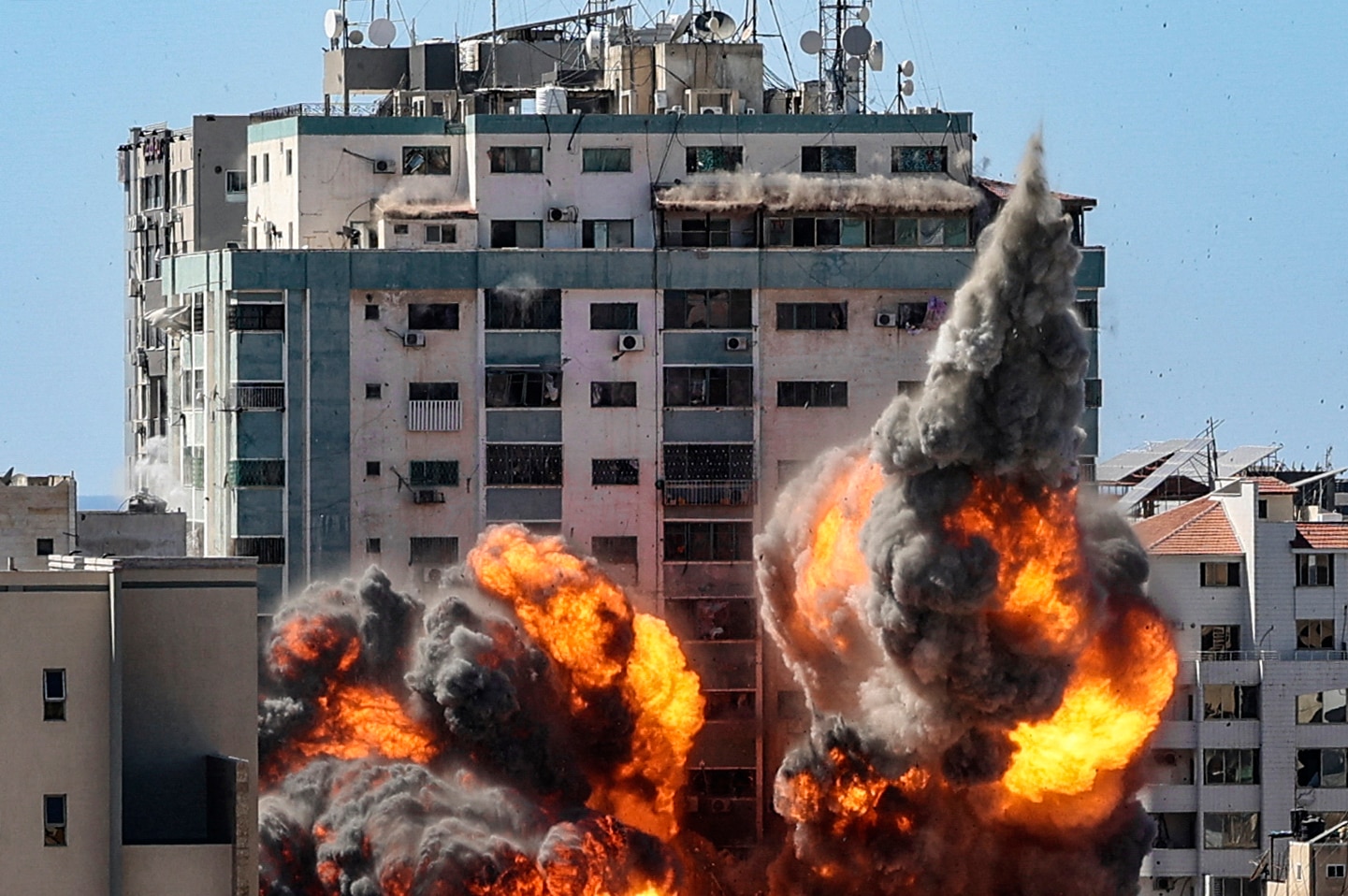 A ball of fire erupts from the Jala Tower as it is destroyed in an Israeli airstrike in Gaza City on 15 May, 2021.
AFP via Getty Images

Israeli air and artillery strikes on Gaza since Monday have killed 145 people including 41 children, and wounded another 1,100, Palestinian health officials said.

Palestinian armed groups have fired at least 2,300 rockets at Israel, killing 10 people, including a child and a soldier, and wounding over 560 Israelis. Israeli air defences have intercepted many rockets.

On Saturday afternoon, a rocket fired from Gaza killed an Israeli man on the outskirts of Tel Aviv, police and medics said. 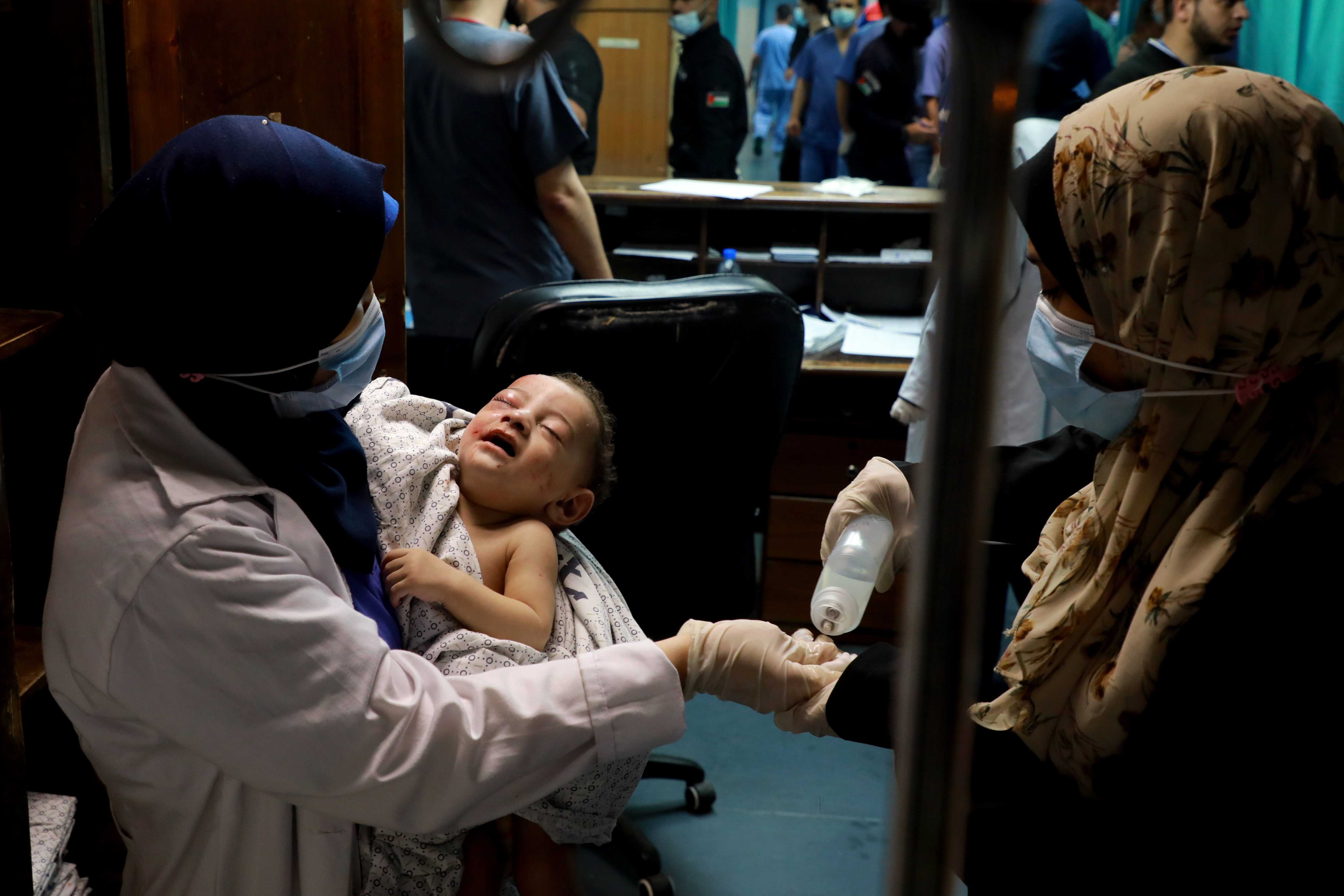 A nurse holds a baby who pulled was alive from under the rubble after an Israeli air strike struck al-Shati refugee camp.
NurPhoto via Getty Images

Palestinians on Saturday marked the Nakba, the "catastrophe" that saw hundreds of thousands of Palestinians displaced during Israel's creation in 1947-1948.

Two Palestinians were killed in clashes with Israeli forces Saturday in the West Bank, the day after some of the worst clashes in recent years in the territory left 11 Palestinians dead.

A Palestinian security source said the fighting was the "most intense" since the second intifada, or uprising, that began in 2000.

US Secretary for Israel-Palestinian Affairs Hady Amr was to hold talks Sunday with Israeli leaders before meeting Palestinian officials to seek a "sustainable calm", the State Department said. 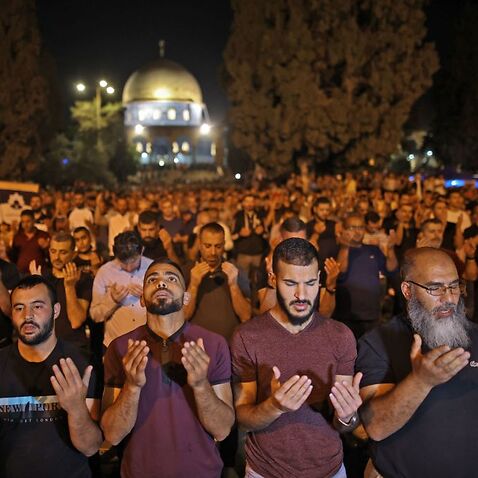 The UN Security Council was to meet Sunday to discuss the violence.

Washington, which blocked a UNSC meeting scheduled for Friday, has been criticised for not doing enough to calm the violence.

Pro-Palestinian demonstrators staged protests across the world, including in Paris, where police used water cannon against them.

Israel, which is also trying to contain Jewish-Arab violence within its borders, is facing its bloodiest conflict with Gaza militants since 2014.

That followed a crackdown against protests over planned Israeli expulsions of Palestinians in the Sheikh Jarrah neighbourhood of east Jerusalem. 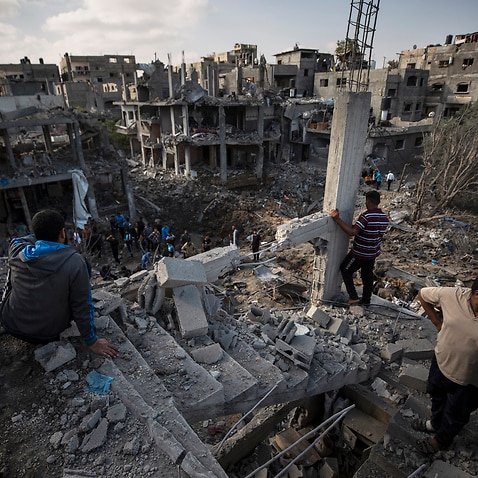 At a protest in the district Saturday, an AFP video journalist saw Israeli forces beating a woman inside a car and shoving a young female protester to the ground.

Some 10,000 Gazans have fled homes near the Israeli border for fear of a ground offensive, the UN said.

"They are sheltering in schools, mosques and other places during a global COVID-19 pandemic with limited access to water, food, hygiene and health services," UN humanitarian official Lynn Hastings said.

Israel's northern borders with Lebanon and Syria, with which it remains technically at war, were also tense.