The Liberal National Party is being called on to apologise after members of its youth branch on the Gold Coast posted a racist video online. 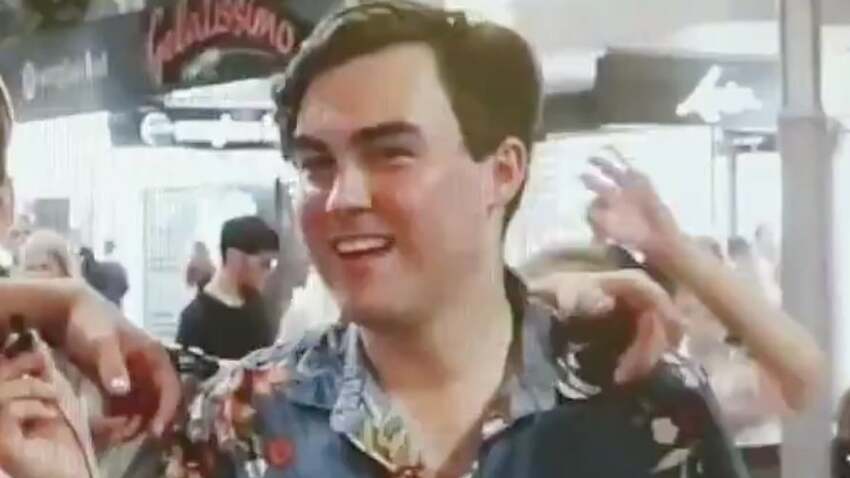 Barclay McGain, chair of the Gold Coast Young LNP, a teenage boy who made racist remarks about Australian Aboriginal culture and a third individual who put it online were suspended by the party on Tuesday.

They are also being investigated by the party's internal disputes committee, which will make recommendations to the party's state executive next year.

Mr McGain, who was filmed interviewing the boy on the Gold Coast during Schoolies celebrations, was seen laughing when the teen said: "I'm fed up with having all these sports stars stand out on our stages and not sing the national anthem.

Mr McGain was condemned on social media after the video was posted. Source: Supplied

"I mean we've got to stop celebrating a culture that couldn't even invent the bloody wheel for God's sake. We've got to start enjoying and living in Western culture."

Gold Coast Young LNP today released a video of vox pop interviews at Schoolies. It's now taken down. In it, we see this comment about Aboriginal Australians and their culture pic.twitter.com/US9FKJWl2M

Mr McGain told AAP on Tuesday "the powers that be" had banned him from commenting about the incident.

"It has been a whirlwind 24 hours but hopefully I can go back to being a normal 19-year-old. I just have to let it go and move on," he said.

Another video emerged on Tuesday of Mr McGain impersonating Donald Trump at the Great Wall of China.

The video, posted on youtube last year, shows Mr McGain saying "this is not the greatest wall but it's a great wall ... We're going to build the greatest wall, it is going to be to keep out the Mexicans, not the Mongolians, or the chikedy chongs, not Genghis Khan bing bong, bing bong."

The party's leader, Deb Frecklington, has so far refused to be drawn on the issue.

However senior members of the Queensland Labor government say she needs to apologise.

But this isnt just anyone. He's quite clearly a Young Liberal here with Member for Petrie, Luke Howarth and former PM Malcolm Turnbull pic.twitter.com/StC6lkNCn7

"There is zero excuse and Deb Frecklington needs to apologise," Premier Annastacia Palaszczuk said in a statement on Wednesday.

"She needs to stand up today and do what she failed to do yesterday," State Labor's indigenous Environment Minister Leeanne Enoch added.