Luca lost his sight as a child. Now he's making braille greeting cards to help others

More than 575,000 people in Australia are blind or have low vision, and teenager Luca Weber is among them. But fewer than a quarter are in full-time work, so Luca has started his own business. 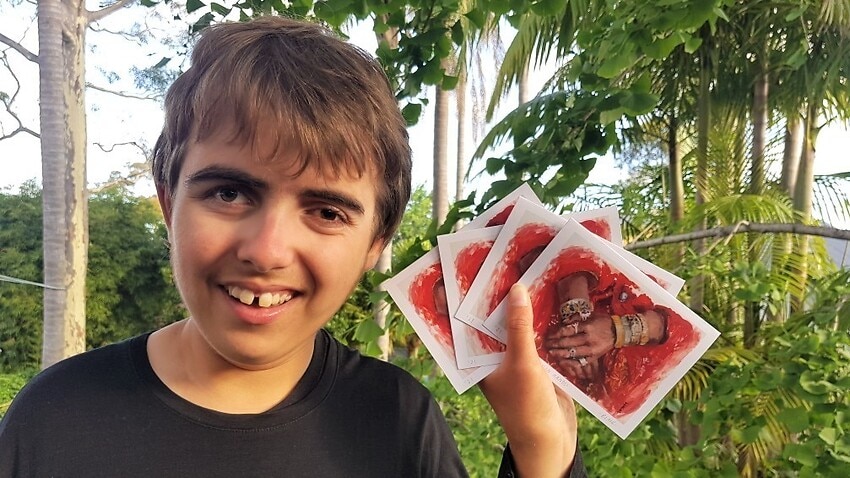 Luca Weber with some of his cards. Source: Supplied/Susanna Wagner

“Peace for all,” reads Luca Weber running his fingertips along a newly-embossed braille insert for a Christmas card. “And Happy New Year.”

His parents certainly hope it will be. They are working hard to help the 19-year-old grow a small venture called Braille by Luca, at their home in Sydney’s Seaforth.

“Luca is an expert operating the braille machine. So we felt there might be a business offering braille cards,” says his mother Susanna Wagner.

As well as inserts for cards, Braille by Luca offers inserts for event invitations and books. The aim is to open up the world for people with limited vision, as well as help Luca earn an income and gain independence.

“Otherwise Luca would end up in a day program being bored for the rest of his life, just being babysat. And that's what we didn't want to have happen,” Susanna says.

Luca's blindness is the result of a brain tumour he was born with. He also has a range of disabilities, including a weakened right arm.

His physical limitations are not the only challenges he navigates in daily life. Luca likes eating fish and chips, but going to a restaurant can leave him feeling embarrassed, he says.

Read More
Anthony has Down syndrome and a job, but others with disability often get overlooked

“It is very frustrating,” says Luca shaking his head.

“Imagine every time you go and sit at a table the waiter has to explain the menu,” his mother adds.

So to change that, Luca is also using his advanced braille skills to make menu inserts for local restaurants.

Luca lost his sight as a child. Now he makes braille greeting cards to help others

Collaborating with support worker and artist Isobelle Blair, Luca is also making braille inserts for a range of seasonal greeting cards featuring an image of an Afghan woman's clasped hands.

The funds are for a non-government agency providing free healthcare services for war surgery hospitals and first-aid posts in Afghanistan.

“I would like to sell a lot of cards and raise money. [Afghanistan] is a poor country and they don't have any food,” Luca says.

Read More
Didar is losing his sight, so he relies on the customers in his shop for their honesty

"I am definitely proud to be involved," says Isobelle, 22, who works with Luca at disability support program Avenue, in Sydney's Frenchs Forest.

"I was researching charities when [Afghanistan] fell to the Taliban. Luca and I wanted to work together to raise money for the people there."

"Luca is a very good person to collaborate with. He is a hard worker and has a very genuine interest in helping people, and calling for better outcomes for those living with disabilities."

Luca’s parents are all too aware of the limited options available for their teenage son.

“Usually young people his age would go on to do some training or further studies. But it is very difficult for people with vision impairment. The unemployment rate is sky high,” Susanna says.

“More than 60 per cent of employers do not feel confident hiring someone with low vision,” says Chris Edwards, Vision Australia’s manager of government relations and advocacy.

“There is a misconception amongst employers that people who are blind and low vision in the workplace are dangerous.

“And 70 per cent of employers believe it is a workplace health and safety issue, yet there's no evidence behind that.”

He is also blind and familiar with the struggle to find work.

“Employment remains a significant challenge, and the rate has not improved much in the past 20 years.

“Only 24 per cent of people who are blind or have low vision are in full-time work, which is a pretty alarming statistic.”

“A lot of larger employers also have diversity and inclusion plans for people with a disability, and there is a great deal more intent to actually make a difference,” he says.

And he applauds Luca’s family for starting their own venture.

“Small business is a genuine option for blind and low vision people. And it is certainly something that we encourage them into.”

Luca’s parents say they will continue to fight for their son's rights after almost two decades of "ups and downs".

"Luca was diagnosed at six months with a brain tumour. It was sitting on the optic nerve and that made his vision deteriorate slowly. So by the age of two, he was completely blind," Susanna says.

After multiple surgeries on the tumor site, there was little more Australian doctors could do. So his parents, who migrated from Germany separately in the 1990s, embarked on a series of experimental treatments in Europe which cost them more than $250,000.

Luca now has treatment on the tumor in Australia but the process remains controversial.

Luca’s condition is now stable and his parents hope his small business will one day allow their son to live independently.

“If we can set him up eventually to live on his own, or live with friends, that's probably the aim," his father Lars says.

"Luca's business is not about mass producing cards. Eventually, we would like to have a sign in a newsagency, that says 'choose any card you like and Luca will braille it for you.'"

With a lot of orders already for Christmas, the family expects soon to "get very busy, and full-on in production mode".

“We are immensely proud of Luca. It is a fantastic success story,” Susanna says.