A controversial Banksy exhibition in Melbourne is displaying more than 80 works of the mysterious street artist who combines graffiti with satire.

Banksy has kept his identity hidden throughout his international rise to fame, with his art appearing on walls and public spaces from Bristol to Bethlehem.

The artist's works providing political commentary with an edge of dark humour and a message of anti-capitalism.

Now dozens of his collection are on display in a Melbourne pop-up gallery that is charging visitors $30 a ticket. 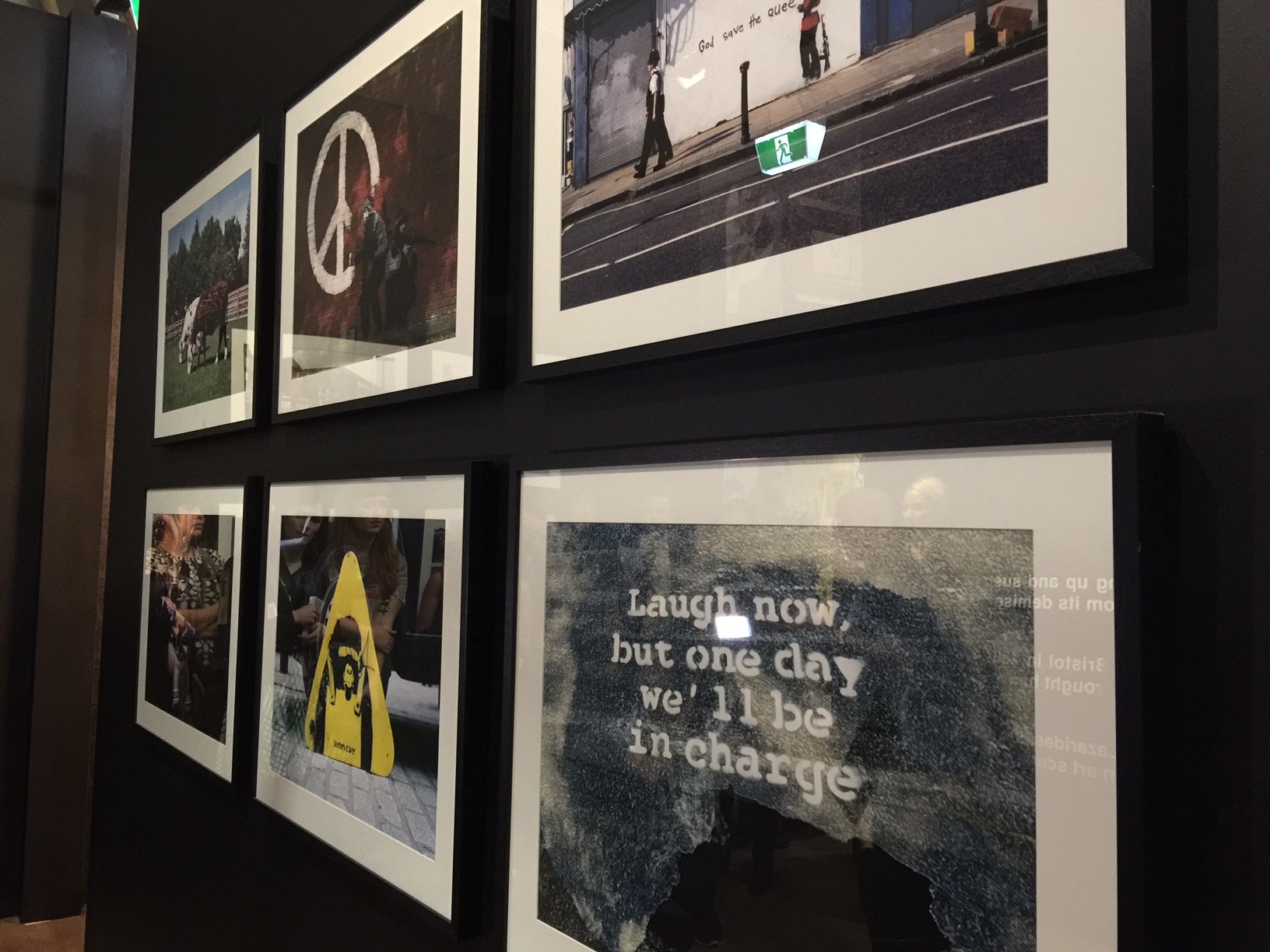 The Art of Banksy Exhibition
SBS

Banky's former friend and agent Steve Lazarides is the curator of the exhibition.

"I figured the general public are the people who put him where he is and I think they earned the right to see a show of his works," he said.

Banksy has distanced himself from commercial galleries and from Lazarides personally.

"I haven't got any ethics or morals so it's difficult to know."

But the curator isn't concerned about any moral implications of showing Banky's work without his approval. 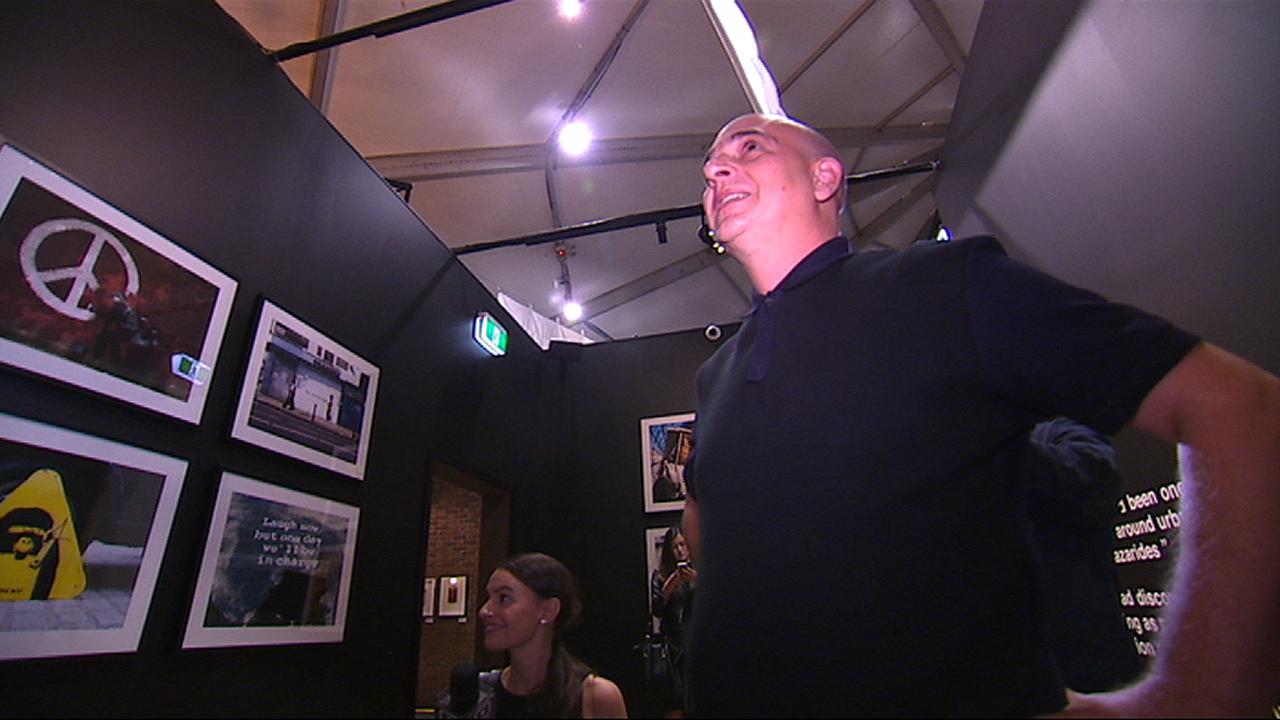 "I haven't got any ethics or morals so it's difficult to know," he said.

Banksy and Lazarides famously had a falling out almost a decade ago.

Lazarides told SBS he still felt compelled to show the works of his former friend and client that were gathered from private collections, none of them were removed from public display for the exhibition.

"Regardless of what our relationship is, I think his work is still phenomenal. He was, is and always will be a genius."

Local artist Adnate was asked to contribute, but considered pulling out when he learned of Banksy's disapproval.

Instead he painted a work mimicking Caravaggio's The Taking of Christ, with Lazarides as Judas and Banksy as Jesus. The Taking of Banksy by Adnate
Supplied by Adnate

"There's so many people out there using his artwork in ways he disapproves of and I just wanted to basically provoke thoughts in minds of people through the painting."

Lazarides has kept the mural in place.

"I've been called far worse over the years so I'll take Judas," he said.

For others, the chance to see the collection is too good to miss.

"Once works like this go out into the public and into the secondary market, exhibitions like this are not uncommon." Banksy on display in The Art of Banksy Exhibition
SBS

The identity of the British street art pioneer is a closely guarded secret, which began as a necessity to evade law enforcement.

This week  a video surfaced on YouTube, with a woman claiming to have captured Banksy in action, painting a Pauline Hanson satirical satire in Hosier Lane in Melbourne.

Just a day later the work was painted over, with the word 'fake' in red capital letters.

Some blame the Banksy Art Exhibition organisers for staging a promotional stunt.

"It wasn't me I wish I could take responsibility for it but it wasn't," he said. Banksy works on display in The Art of Banksy exhibition
SBS

Despite repeated calls for Banksy to go public and claim his work, Professor Young said it would ruin his image and any chance of retaining anonymity from the media.

"The mystery is part of the mystique. So everyone loves the idea that this is the best kept secret in the art world today." 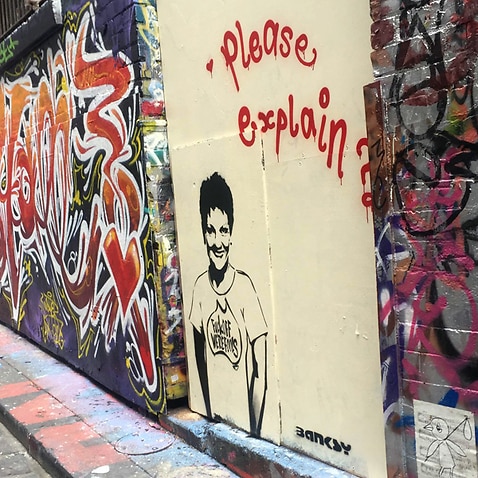