The National Summit on Women's Safety has been told the complex experiences of migrant and refugee women need to be better understood in the nation's response to domestic violence. 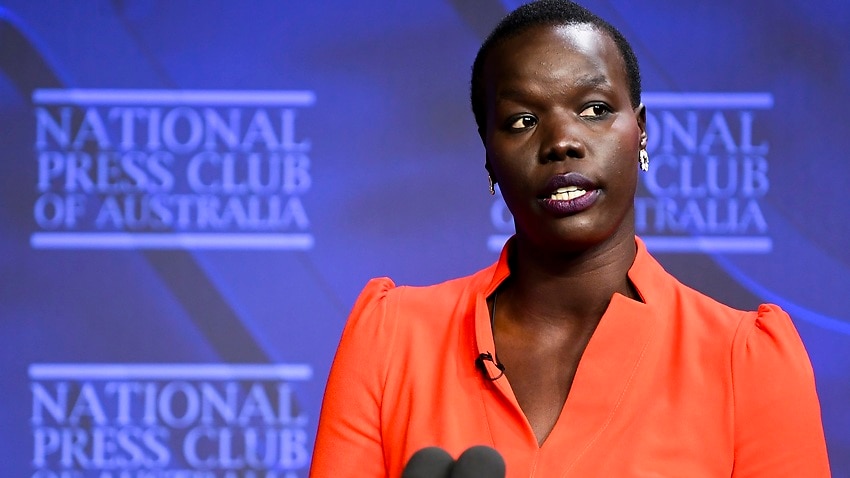 Migrant and refugee women can’t just be an “afterthought” and must be closely considered in the shaping of a new national action plan on domestic violence, human rights advocate Nyadol Nyuon says.

She made the comments at the National Summit on Women’s Safety, being held virtually over Monday and Tuesday to bring together women’s advocates and experts to help inform the next response plan.

The existing 12-year strategy to reduce violence against women and their children was drawn up more than a decade ago and is due to be replaced next year.

Ms Nyuon - who is also chair of migrant support group Harmony Alliance - told the summit the next national plan needed to better understand the complex experiences faced by these women.

“Migrant women and refugee women and other minority groups [can’t] just end up being an afterthought,” she told the virtual summit.

“The challenge is to be able to understand the particular challenges that they face, but also how that is integrated into the larger frame of being Australian women or living in an Australian context.”

She spoke during a summit session addressing perpetrator interventions and coercive control, where panel members raised concerns about the unique challenges these pose to women from diverse backgrounds.

Coercive control is a form of domestic violence in which perpetrators take away their partner's autonomy and freedom using various methods.

This could include isolating them from family and friends, humiliating them, tracking their movements or removing their ability to make decisions.

A survey from June this year found up to a third of refugee and migrant women living in Australia have experienced domestic and family violence.

Ms Nyuon told the summit the majority of women in this cohort had also experienced coercive control.

"It is definitely a reoccurring problem," she said.

She said some unique challenges faced by migrant and refugee women included the potential for their visa status to be exploited by perpetrators.

"We think that women should have equal protection and access no matter their visa status," she said.

"There is really a number of challenges and the visa status itself is a vulnerable position to be in."

Another example put forward was social media failing to respond to technology-based abuse faced by victims in languages other than English.

The summit also discussed how Queensland and New South Wales have both explored options to make coercive control an offence and recognise non-physical forms of abuse as a form of domestic violence.

But Australian Institute of Criminology researcher Haylee Boxall said legislation should not be considered a "silver bullet" to addressing behavioural change.

"We have to have alternative mechanisms for engaging men in programs that are not tied the criminal justice system," she told the summit.

'Australia does have a problem'

On average, one woman is killed by her current or former partner in Australia every nine days and approximately one quarter of women have experienced at least one incident of violence by an intimate partner.

Prime Minister Scott Morrison earlier expressed his concern to the summit that Australia is failing to do enough to protect women from domestic violence and said more must be done.

"It is not a new problem and it is not a simple problem. But Australia does have a problem," he told the summit.

“Too many Australian women do not feel safe and too often, they are not safe and that is not OK."

Ms Jenkins on Monday expressed frustration during the summit at the failure to write into the Sex Discrimination Act a positive duty for employers to be proactive in preventing sexual harassment.

"The one that is a missed opportunity and is central is the positive duty in the Sex Discrimination Act," she told the summit.

"I would just say it's not off the agenda even though it's frustrating."

During an earlier session, Aboriginal and Torres Strait Islander community advocates also raised concerns about the failure of the national plan to address domestic violence in their community.

The summit heard Aboriginal and Torres Strait Islander women were 11 times more likely to die as a result of family and domestic violence.

"Lives are being lost because people who think they know better than us [and] will not listen to us and act on our advice."

Ms Nyuon also warned that systems of government could play a role in exacerbating the experiences of "discrimination or marginalisation" suffered by migrant and refugee women.

"The system itself can become a tool for repression," she said.