NSW Environment Minister Matt Kean says Australia must stop making climate change a matter of religion and instead make it a matter of science as unprecedented bushfires burn across the state.

A senior NSW Liberal Minister has broken ranks to call for stronger action on climate change and criticised those that treat the issue as a "matter of religion" rather than science.

As Sydney choked on hazardous smoke on Tuesday, State Environment Minister Matt Kean delivered a speech to the Smart Energy Summit saying the unprecedented bushfires had been caused by climate change.

"Let's call it for what it is, these bushfires have been caused by extreme weather events, high temperatures the worst drought of living memory - the exact type of events scientists have been warning us for decades that would have been caused by climate change," Mr Kean told the audience. Sydney was blanketed by a thick layer of hazardous smoke on Tuesday.
Twitter @DrDallasG

His comments are in stark contrast to the handling of the bushfire crisis by other Liberals, including Prime Minister Scott Morrison and Premier Gladys Berejiklian, who have refused to link the ongoing emergency to climate change. 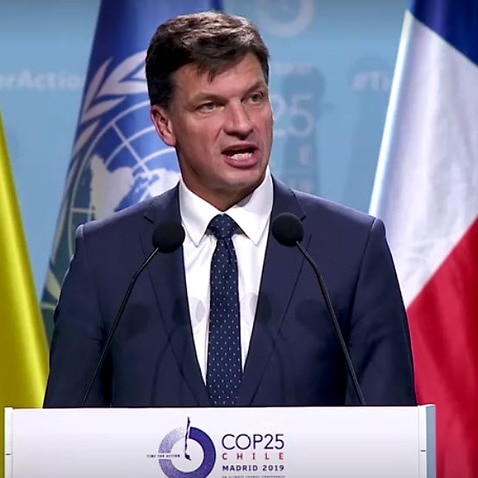 The Environment Minister doubled down on his comments on Wednesday morning.

Earlier on Wednesday morning, NSW Education Minister Sarah Mitchell said now was the time to focus on supporting the victims of bushfires and firefighters, rather than having "philosophical debates" about what caused the bushfires. But Mr Kean said he was not going to wait until the end of summer to have a "meaningful conversation" about the causes which he said was necessary in order to begin to address them.

"We know that the issue is temperatures, dryness and all of these are clearly relevant factors. I don't pretend to be an expert in this area," Mr Fletcher told ABC News Breakfast.

He said the government was committed to meeting its carbon emissions reduction targets under the Paris Agreement.

"Get Matt Kean out to say a few soothing words, meanwhile the entire Berejiklian and Morrison Governments are led by climate do-nothing and deniers," Ms McKay tweeted on Wednesday.

In his speech, Mr Kean promised NSW would go it alone if Canberra refused to step up to decarbonise the economy.

"It's not time to end the climate wars. It's time to win them."

He said Australia had the potential to become an energy superpower.

"We have the land, the wind, the solar, as well as the supply lines, expertise and infrastructure. We cannot allow ideology and politics to get in the way."