Pauline Hanson is standing by senior One Nation figures who she says were "stitched up" by Al Jazeera.

One Nation leader Pauline Hanson has backed her chief of staff and Queensland party leader who were secretly recorded seeking donations from the US gun lobby and discussing weakening Australian gun laws.

Facing the cameras for the first time since secret recordings revealed James Ashby and Steve Dickson sought donations from the powerful National Rifle Association, Senator Hanson described the comments as "stupid" and "inappropriate", but said they had been victims of entrapment by the "Islamist network". "When I first saw the initial hit piece and Steve Dixon's comments I was disgusted. But having watched my own comments knowing how out of context they were betrayed to the Australian people, I knew he was stitched up," she said.

"I acknowledge Steve, made some inappropriate comments, however, let's not forget, he was set up. 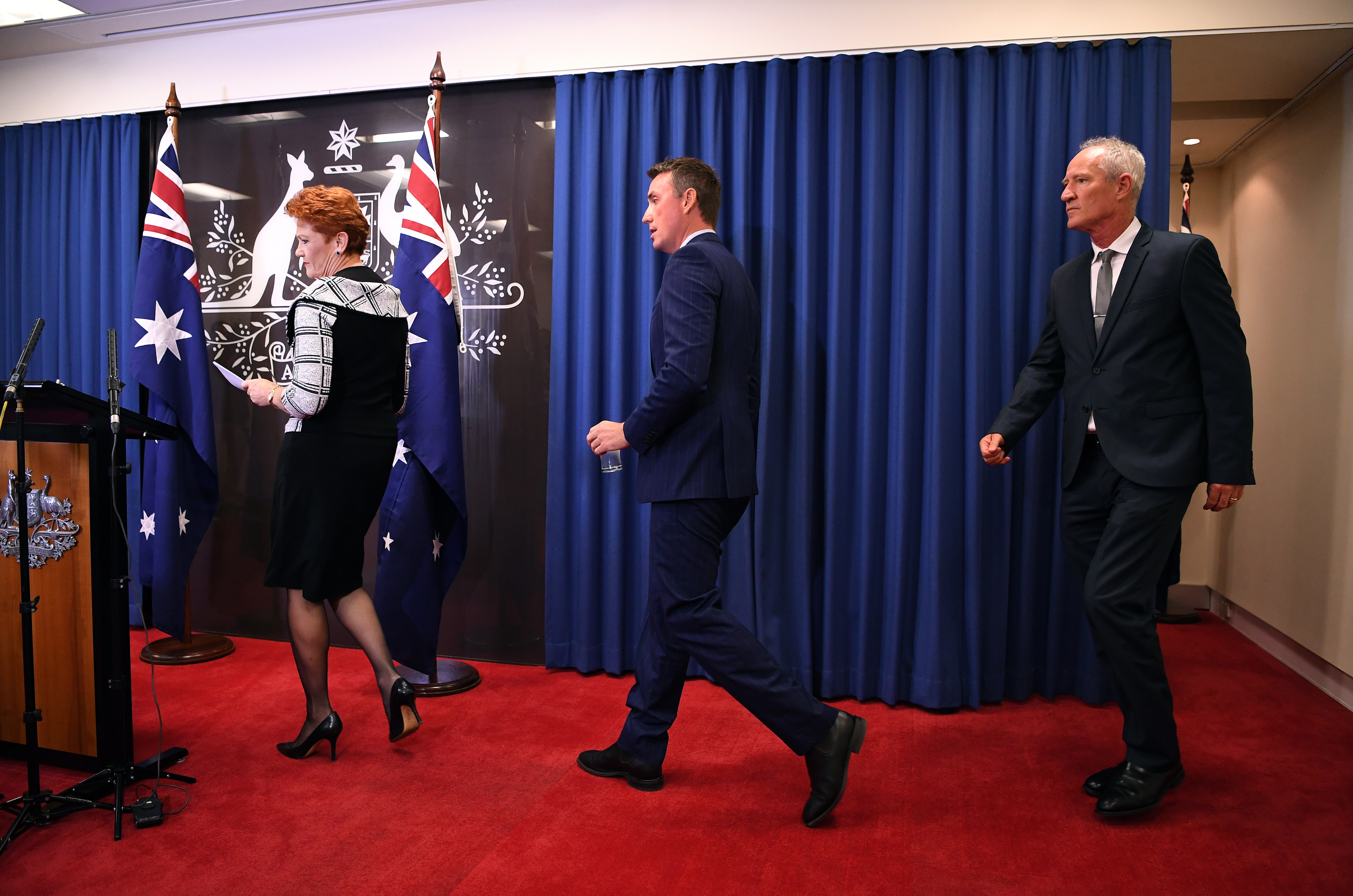 "It was a ploy to destroy One Nation leading into the election. Steve has admitted and understands what he said wasn't the right thing but he was taken out of context, and a victim of entrapment.

"Sometimes we learn the hard way. We all deserve a second chance. That is exactly what Steve will get. I stand by Steve and James and so does the party." One Nation leader Pauline Hanson says the party's Queensland leader Steve Dickson was a victim of a set up.
AAP

Senator Hanson accused the media of "hate and bias" against her party in their coverage of the scandal.

"Today is a day of shame for the Australian media who have been sold a story that is too good to be true, and you took it hook, line and sinker.

"Media across Australia have been blinded by hate and bias towards One Nation and myself."

Senator Hanson made a direct appeal to new ABC chairwoman Ita Buttrose to stop the second part of the Al Jazeera documentary exposing her and her staff being broadcast on Thursday night.

In the latest installment of the investigation, Senator Hanson appeared to suggest the 1996 Port Arthur massacre was a government conspiracy.

But Senator Hanson said her comments were heavily edited.

"There is no doubt in my mind that Martin Bryant is the only person responsible for the murder of 35 innocent lives."

Liberal Party to preference One Nation below Labor

Senator Hanson, who took no questions, also responded to Prime Minister Scott Morrison's announcement that the Liberal Party will preference One Nation below Labor at the May election. While Mr Morrison stopped short of committing to put the far-right minor party last, he said he had recommended to Liberal Party executives that One Nation be placed below Labor on their how-to-vote cards. 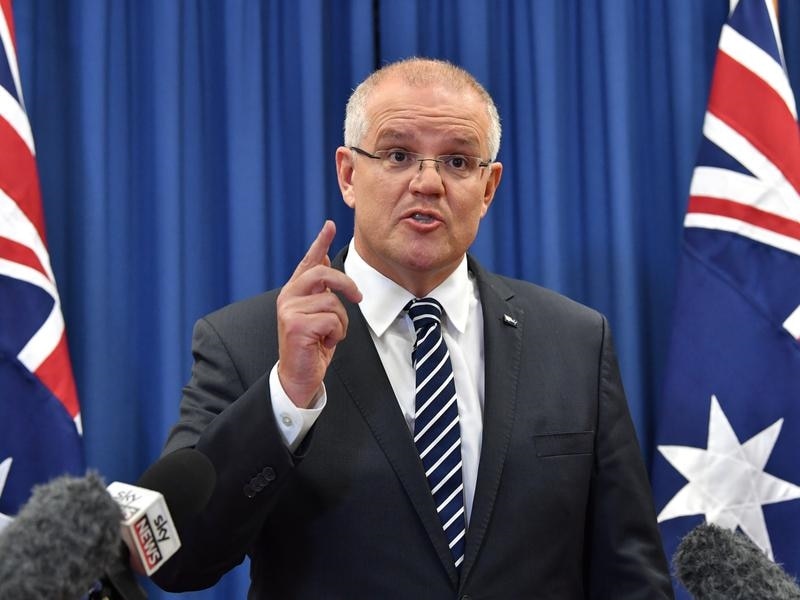 Prime Minister Scott Morrison says the Liberal Party will preference One Nation below Labor at the May election.
AAP

Mr Morrison said the party had accepted that recommendation.

“This is a decision which is based on our strong view about the sanctity of Australia’s gun laws,” Mr Morrison told reporters on Thursday in Perth. On Wednesday, the Prime Minister said he would wait for the full list of nominations before making a decision, but he said One Nation's failure to address the scandal adequately convinced him to act now. One Nation Leader Pauline Hanson is set to front the media over a guns scandal engulfing her party.
AAP

“Sadly I’m disappointed and I find the response to the actions of those One Nation officials unsatisfactory.”

The Nationals are yet to decide where they will preference One Nation with Deputy Leader Bridget McKenzie saying on Thursday that the decision was a matter for the state branches.

If One Nation mirrors the Morrison stance (i.e. preferencing Labor ahead of Liberals/Nationals) how will the Government fare in Banks, Gilmore, Hughes, Robertson, Riverina, Parkes etc??
Answer: bye-bye Sco-Mo

Mark Latham, who won a seat in the NSW upper house at the weekend's election, warned the Liberals' electoral fortunes would take a hit if One Nation took the same approach.

Mr Morrison also isn't ruling out putting One Nation higher than the Greens, describing them as a "real serious danger" to Australia.

"The Greens have opposed us on almost every national security legislation we have put into this parliament, they have actively worked against the safety of Australian people," Mr Morrison said. 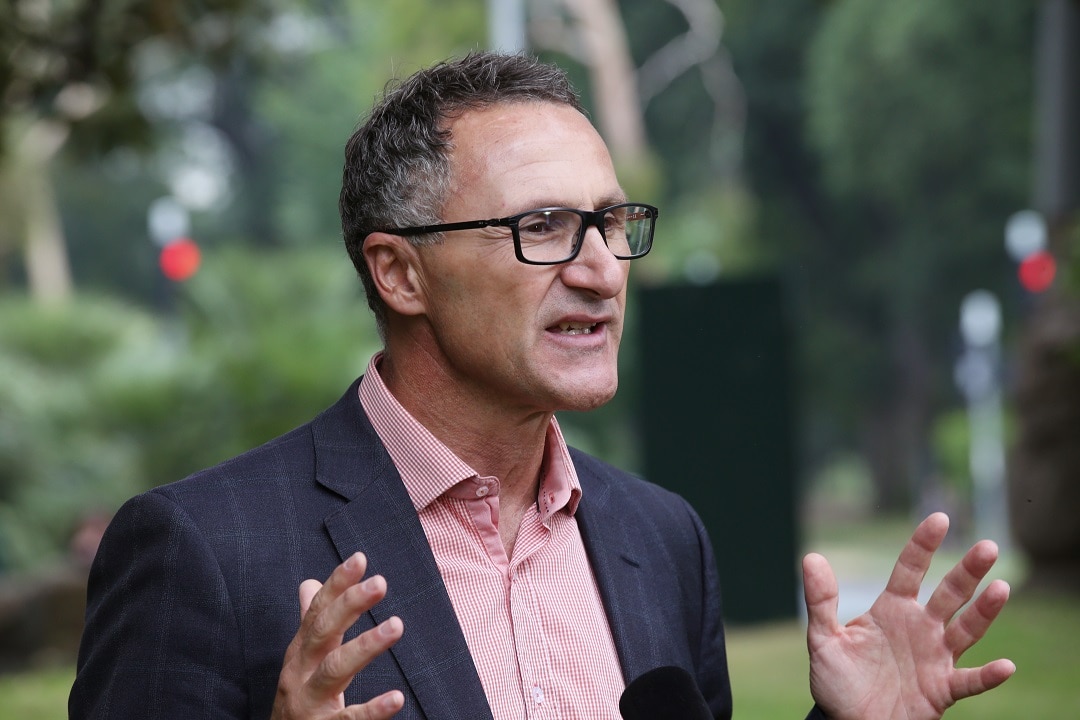 "Unless you put One Nation last on your how to vote cards, you are effectively endorsing the views of a racist conspiracy theory, climate denying party."

He said it leaves the door open for a "grubby deal" with One Nation.

Hanson has 'a lot of questions' about Port Arthur

Hidden camera footage, released by Al Jazeera as part of an undercover operation, showed her saying she had "a lot of questions" about Port Arthur.

"An MP said it would actually take a massacre in Tasmania to change the gun laws in Australia," Senator Hanson told Al Jazeera reporter Rodger Muller.

"Haven't you heard that? Have a look at it. It was said on the floor of parliament.

"I've read a lot and I have read the book on it, Port Arthur. A lot of questions there." But Nationals Deputy Leader Bridget McKenzie said the One Nation leader's comments were not worthy of media coverage.

"I think the less airtime we give these ridiculous comments from Pauline Hanson the better," Senator McKenzie told reporters on Thursday.

She also defended a government survey on the importance of shooting to Australia.

The questionnaire was issued last year and Senator McKenzie rejected questions about whether it should be pulled after the Christchurch mosque shootings.

"My question to you is are you conflating law abiding citizens participating lawfully in their sport with an extreme terrorist?"