Coalition supporters are celebrating a remarkable election win as Labor prepares for a leadership contest to replace Bill Shorten.

Prime Minister Scott Morrison has led the Coalition to a stunning election victory on Saturday, securing a third term in government.

The Liberal and National parties are on track to win at least 74 seats combined, while Labor is expected to win 66 with five still in play.

On Sunday, Mr Morrison and his wife Jenny attended their Pentecostal church in Sydney's south. In brief remarks to reporters, Mr Morrison thanked "all Australians across the country" particularly "the great people of the Sutherland Shire", where his electorate of Cook is located.

The prime minister said he was also thankful to "live in the greatest country in the world".

Congratulations were coming thick and fast, including from US President Donald Trump and former prime minister Malcolm Turnbull.

Congratulations @ScottMorrisonMP on an outstanding personal victory. Australians have once again backed the Coalition to deliver a strong economy, more jobs & lower taxes.

Less than a year after the Liberals dumped Malcolm Turnbull, Mr Morrison defied months of bad polls to triumph on Saturday.

A swing towards the Liberal National Party in Queensland was crucial to his victory, with the conservatives holding key marginal seats and gaining two seats, Longman and Herbert.

In his victory speech on Saturday night, Mr Morrison told Liberal Party faithful: "I have always believed in miracles". Questions are now being asked about where Labor went wrong and why its policy platform to ramp up action on climate change and spend more on health, bankrolled by tax changes, failed to impress voters in key seats.

Bill Shorten conceded defeat on Saturday, announcing he will step down as party leader following the shock loss.

"I know you're all hurting and I am too," he told Labor faithful in Melbourne.

As the Liberal crowd chanted "ScoMo", the Liberal leader promised to get straight "back to work".

How good is Australia! How good are Australians! Thank you! 🇦🇺 pic.twitter.com/i41QRz5Roz

Despite trailing in the polls for months leading into the election, the Liberals and National party performed far better than predicted, while Labor failed to pick up seats it was targeting.

"Tonight is not about me or it's not about even the Liberal Party," Mr Morrison said.

"Tonight is about every single Australian who depends on their government to put them first."

But former foreign minister Julie Bishop said it was Mr Morrison's presidential-style campaign that had led to victory.

"If Scott Morrison pulls this off he will be forever immortalised in the history of the Liberal Party - he will be confirmed enduring fame if he is able to find that goat track back," she told the Nine Network.

As the polls closed on Australia's east coast on Saturday evening, Labor was optimistic of winning, but early results soon dashed their hopes.

The upbeat mood in the Labor Party function in Melbourne faded as the night went on with supporters becoming tense and then dejected. Liberals cheer as results show the Coalition on track to retain power.
AAP

A handful of seats are still in doubt. Of those, Labor is ahead in Boothby and Cowan, the Liberals lead in Macquarie and Chisholm and independent Kerryn Phelps has an edge in Wentworth over the Liberals' Dave Sharma. The Liberals benefited from a strong flow of preferences from Clive Palmer's United Australia Party and Pauline Hanson's One Nation, which together gained almost 6.5 per cent of the national primary vote.

Labor supporters in tears. It’s becoming clear the The Coalition is on track for victory. People here are starting to leave. @SBSNews #auspol #ausvotes19 pic.twitter.com/Rx8APZB4NA

Some real tension at the moment amongst the Labor faithful here in Melbourne @SBSNews #auspol #ausvotes19 pic.twitter.com/lbEHsPCQTO

In one of the most hotly contested seats, former prime minister Tony Abbott lost to independent Zali Steggall. 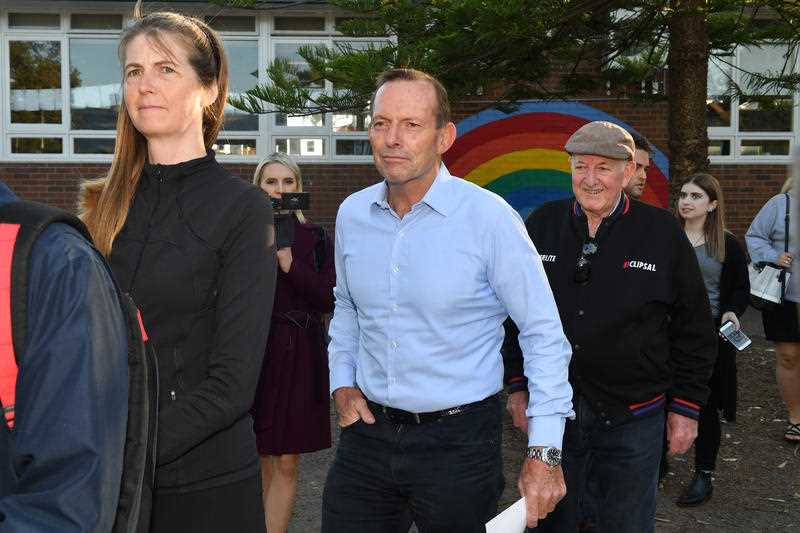 Tony Abbott lines up to vote on election day.
AAP

Mr Abbott suffered a huge swing against him of almost 14 per cent, according to the Australian Electoral Commission.

In his concession speech, Mr Abbott focussed on the better-than-expected overall result for the Coalition.

"What's best for the country is not so much who wins or loses Warringah, but who forms, or does not form, a government in Canberra," Mr Abbott told his supporters.

"And tonight we can be extraordinarily confident, more confident than we ever had any right to expect, that we will have continued good Liberal-National government." Senior Liberal MP Peter Dutton hung on to his marginal seat of Dickson with a swing towards him.

Treasurer Josh Frydenberg also fought off a challenge from the Greens Julian Burnside and independent Oliver Yates to retain Kooyong in Melbourne, despite a swing against him.

Today I voted for the first time in my life, it feels great to be able to vote in Australia. I wish the best for Australia. #straya #Election2019Results #Aussie pic.twitter.com/3ZZcWs09ri

Labor frontbencher Brendan O'Connor said it had been a tough night and he was "disappointed for the Australian people".

He declined to say what would happen with Labor leader Bill Shorten, who had held the position for six years.

"There will be a lot of reflection for the Labor party in relation to policies and personnel, but that is something for another time," he told Nine.