The young Saudi woman who fled her family seeking asylum abroad has arrived in Canada, after successfully harnessing the power of Twitter to stave off deportation from Thailand.

Rahaf Mohammed al-Qunun’s desperate flight from Saudi Arabia and quest for refugee status was first highlighted on social media, giving rise to the #SaveRahaf hashtag. Now, offered asylum in Canada, Canadians have welcomed the teen with open arms via the same medium.

Fleeing her Saudi family, Ms Qunun sent out a series of urgent tweets begging for help as she barricaded herself in an airport hotel room in Bangkok. She said she had renounced Islam, which is punishable by death in Saudi Arabia, and was terrified of her fate if she was returned to the Middle East. 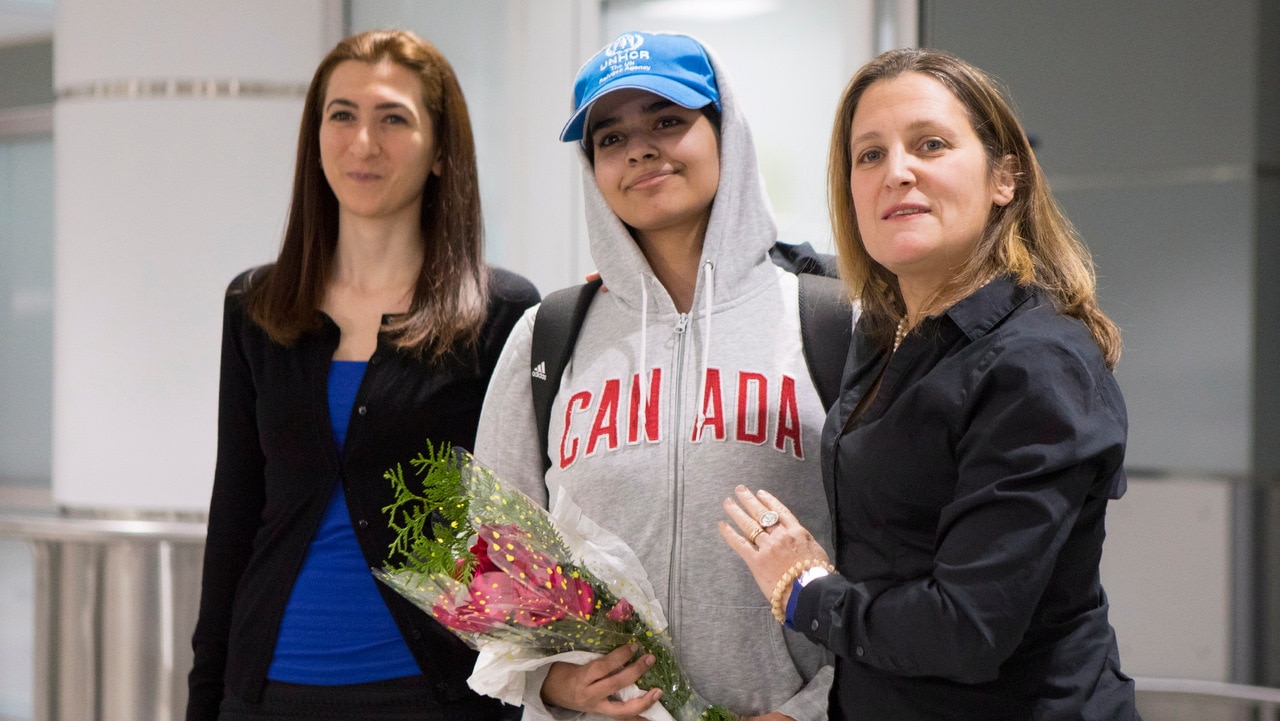 Within minutes, her tweets were being translated and re-tweeted around the globe – catching the attention of activists and Human Right Watch, which quickly sprang into action.

Eventually recognised as a legitimate refugee by the United Nations, the 18-year-old boarded a Korean Air Flight bound for Canada on Friday night (Bangkok local time).

She tweeted two pictures from her plane seat - one with what appeared to be a glass of wine and her passport, and another holding her passport with the hashtag "I did it". 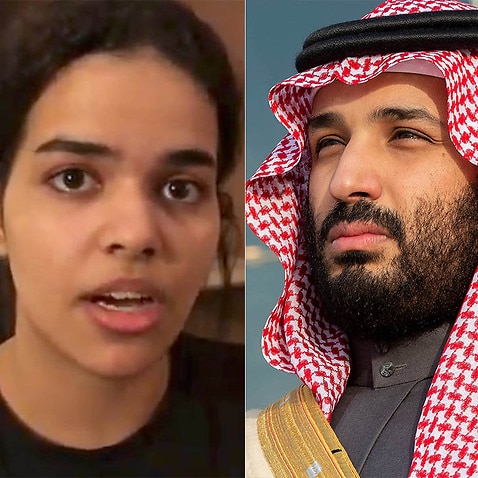 Even before she touched down in Toronto – to jubilant scenes – Canadian social media had exploded with messages of good will and welcome."#WelcomeToCanada Rahaf!! We are honoured that you chose us," @Jodi_Williams_ tweeted. "Giving Rahaf asylum is the first of many steps in becoming Canadian. That being said, this makes me proud to be Canadian," @GuyDesaulniers tweeted, using the #WelcomeHomeRahaf hashtag that emerged after the Saudi teen arrived.

"I so want to hug the Canadian bureaucrat who decided this, not just for saving this young woman's life fleeing #SaudiArabia, but for making me proud to be Canadian. #WelcomeToCanada," Ottawa professor Amir Attaran tweeted.

A proud day to be a #Canadian .... 😌
That's my #country 🇨🇦 Nice people of the North #WelcometoCanada Saudi #Girl ! https://t.co/rTPBxzliqA

I hope our government will help her integrate into our society and not just leave her to her own demise. Giving Rahaf asylum is the first of many steps in becoming Canadian. That being said, this makes me proud to be Canadian. #WelcomeHomeRahaf , #WelcomeToCanada .

I so want to hug the Canadian bureaucrat who decided this, not just for saving this young woman's life fleeing #SaudiArabia, but for making me proud to be Canadian.#WelcomeToCanadahttps://t.co/OUqSW5TR4d

When your family threatens to kill you, then disowns and discards you, it’s a wound that never heals, Ive learned

But I will be @rahaf84427714’s new family now, as will so many other loving Canadians

Use this hashtag to make her feel welcomed and loved!#WelcomeHomeRahaf❤️🇨🇦❤️

"Good luck, #Rahaf! While you may feel alone at first, as I told you before, you have more friends around the world than you know," Human Rights Watch’s deputy Asia director Phil Robertson tweeted.

Human Rights Watch said it had used social media to remain in constant contact with Ms Qunun throughout the ordeal.

"Human Rights Watch swung into action, alerting journalists, contacting the United Nations refugee agency, UNHCR, so they would demand access to her, and enlisting the support of friendly embassies to press Thailand to change course," Human Right Watch senior researcher Sunai Phasuk said in a statement.

"Within 24 hours, #SaveRahaf had been used half a million times. The 18-year-old live tweeted her ordeal, probably saving herself from being deported or sent to a detention centre.
AAP

"Our team was in constant contact with Rahaf via Twitter direct messages and WhatsApp, documenting her story."

What a beautiful moment.

Rahaf, you can finally exhale. It's a new day, it's a new beginning.

Ms Qunun's swift use of Twitter saw her amass more than tens of thousands of followers within a week, highlighting her plight at a time when Saudi Arabia's human rights record is under heavy scrutiny following the murder of journalist Jamal Khashoggi last year.

Hey @Reebok
Do you want a gorgeous, fierce warrior as the face of your company?

Do you want to try to undo the regressive mistakes of your competitor @Nike?

Rahaf has arrived in #Canada! Bravo @rahaf84427714 - you did it! pic.twitter.com/gctwax2lVO #RahafDidIt

Her use of social media allowed her to avoid the fate of countless other refugees who are quietly sent back home or left to languish in a Bangkok detention centre. 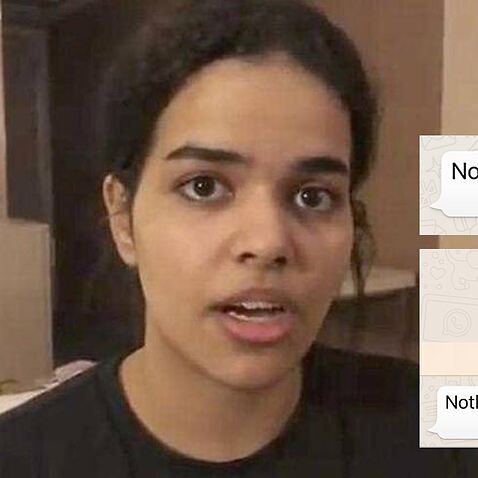 On Friday afternoon, Ms Qunun posted a cryptic tweet on her profile saying "I have some good news and some bad news" - shortly afterward, her account was deactivated in response to death threats she had faced, her friends said.

But she was back online later in the day, tweeting: "I would like to thank you people for supporting me and saving my life. Truly I have never dreamed of this love and support."

In a tweet, the UNHCR said: "We welcome Rahaf's arrival in Canada and the Canadian Government's decision to provide protection and a long-term solution for her there as a resettled refugee."

Ms Qunun smiled broadly as she exited an airport arrival door on Saturday wearing a hoodie emblazoned with the word 'Canada'.

The teenager was tired and preferred not to take questions but she had wanted to come out and say hello to Canadians, Ms Freeland added.

"She wanted Canadians to see that she's here, that she's well and that she's very happy to be in her new home."

Canadian Prime Minister Justin Trudeau said his nation swooped in to offer asylum ahead of Australia because Canada was committed to human rights.

"Canada has been unequivocal that we'll stand up for human rights and women's rights around the world," he said.

"When the United Nations made a request of us that we grant al-Qunun's asylum, we accepted." Earlier, the Australian government welcomed the news that Ms Qunun was granted asylum in Canada, saying her safety was its primary concern. Australian officials had been weighing whether to offer her asylum, Immigration Minister David Coleman said.

"We have been working with the UNHCR and international partners to ensure her claim is assessed appropriately," he said in a statement.

"We wish Ms Alqunun all the best for her future in Canada."